AppleInsider
Posted: February 4, 2020 5:34PM
in iOS edited February 2020
The developer of BlueMail is asking other developers of iOS and macOS apps to call out Apple's "Sherlocking" practice, when it incorporates features from other apps and services, in the belief it's unfair for Apple to take another's ideas "without permission, payment, or credit." 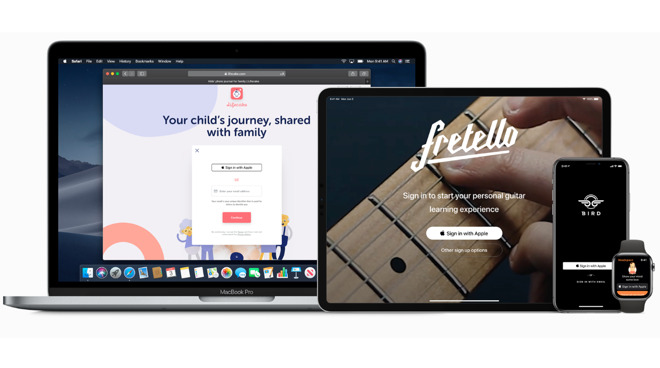 Sign in with Apple, a feature that 'Sherlocked' Blix

Blix, the firm behind BlueMail and Followapp, is currently in the process of suing Apple over the introduction of "Sign in with Apple," under a claim it copies BlueMail's "Share Email" feature. The BlueMail function allowed users to communicate using a "manageable public interaction address, without revealing their private interaction address," a concept that Sign in with Apple performs by creating custom email addresses and forwarding communications onward.

After filing that lawsuit in October, the firm has moved on to try and garner support from other developers who underwent similar instances of "Sherlocking," where their apps became effectively worthless after Apple produced its own version of core functions.

Speaking to the Financial Times, Blix is still working on the lawsuit, but believes the slow legal process is working in Apple's favor. While the firm has been in contact with other developers who underwent similar treatment and are unhappy with the circumstances, many have so far elected to avoid suing Apple or making too much of a fuss in public due to the potential for retribution.

"We are considering all options, including a class-action lawsuit," Blix co-founder Ben Volach claims. "We are going to make sure this is resolved. We are sure there are thousands that are suffering from this."

We're issuing a call for unity against the biggest tech company. If Apple has kicked you out of its App Store, used guidelines to control you, hijacked your ranking or stolen your tech, reach out to us at [email protected] https://t.co/W6Coxa5v1Z#fairness2020 #apple #developer

The accusations of unfairness stem from Apple being both a rival software producer to the developers and the controller over the digital storefronts where the apps are sold. This has led to further claims Apple is making it so that the original apps are not able to compete against the Apple-produced equivalents fairly.

In Blix's case, its app was removed from the macOS App Store due to security concerns, but Apple insists "We have attempted on multiple occasions to assist in getting their BlueMail app back on the Mac App Store."

Apple also fields suggestion that it manipulates the app store to its benefit, but it asserts it does no such thing. "We provide all developers with a fair and level playing field on which they can compete," Apple told the report.

For parental control app Kidslox, the introduction of Apple's Screen Time coincided with the app being kicked off the app store along with other similar tools, under claims there were user privacy and security risks. In Kidslox's case, it was unable to provide updates to the app for over a year, though that changed once it was challenged in an "Abuse of Dominant Position" complaint at the European Commission in early 2019.
«12»