AppleInsider
Posted: February 16, 2020 11:26PM
in General Discussion edited February 2020
Apple Maps are showing train, bus, and tram directions for users in new European locations such as France, Spain, and Germany as a new update appears rolls out across the EU. 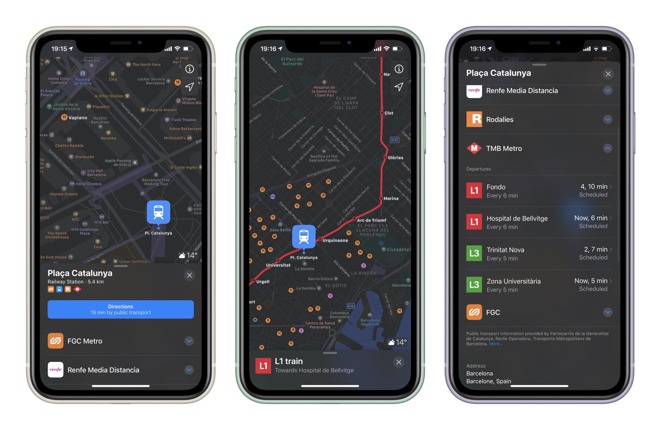 As Apple Maps continues to update across the globe, more and more countries should start seeing updates like this on a regular basis. One eagle-eyed Twitter user noticed the addition on Sunday evening.

This update follows the recent United States rollout of Apple's new maps data. If the pattern continues as it did for the US, the EU should begin seeing more areas get transit directions and indoor maps as Apple prepares to launch its updated map database elsewhere.

Transit updates began in the US in 2015, and are still being added to smaller cities throughout, so it is hard to determine an exact timeline on how long this may take. When Apple unveiled their final US update, they stated that Europe would be the next target for the rollout.

"We set out to create the best and most private maps app on the planet that is reflective of how people explore the world today," said Eddy Cue, Apple's senior vice president of Internet Software and Services. "It is an effort we are deeply invested in and required that we rebuild the map from the ground up to reimagine how Maps enhances people's lives -- from navigating to work or school or planning an important vacation -- all with privacy at its core." Cue concluded, "We look forward to bringing this new map to the rest of the world starting with Europe later this year."

Seeing such updates already beginning is a good sign, and since Apple has been driving its vehicles through Europe for more than a year now, they should be well on their way to a late 2020 release cycle.

Apple Maps Transit provides routes, departure times and other relevant data for buses, trains, ferries and other forms of public transportation. This will allow better information for commuters and travelers who prefer Apple Maps.

The Apple Maps app is only available on Apple platforms and via the web through search engines like DuckDuckGo.