AppleInsider
Posted: February 17, 2020 11:34AM
in General Discussion edited February 2020
The makers of the high-profile HQ Trivia app have gone bankrupt, and its last live broadcast featured drunk presenters looking for work, while paying the final prize money out of their own pockets. 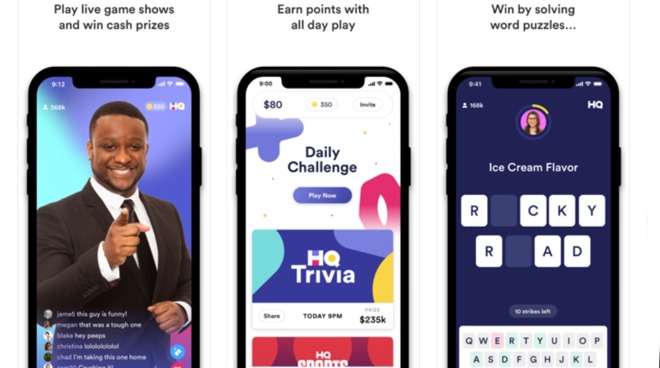 In 2018, HQ Trivia was a popular new app for iOS that was even lauded by Apple and saw huge numbers of players. Two years later, it has closed down for good.

HQ Trivia was played on smartphones and involved a live element where presenters would ask a dozen multiple-choice questions during a 15-minute show. Anyone answering everything correctly would share in the day's prize, which at times could be as much as $300,000.

According to BBC News, it's estimated that in total HQ Trivia gave away $6 million in cash. It was backed by investors and the aim was that company brands could pay to run special editions about their own products. The original investors backed out and a deal to arrange a new buyer appears to have collapsed last week.

On February 14, the company made its 25 employees redundant and ran its final live show.

"Why are we shutting down?" co-presenter Matt Richards asked on air. "I don't know. Ask our investors. What am I going to do with my fish tank? I think our investors ran out of money."

Co-presenter Anna Roisman was more to the point. "Someone hire me! I'm talented," she said.

Richards revealed on air that he'd been drinking before the show, and then during the broadcast brought out champagne. Reportedly the giant bottle was being saved for when HQ Trivia reached three million players, but it never did.

The final day's total prize money was $5, which Richards paid for himself. BBC News says that the five bucks had to be divided between 523 winners.

HQ Trivia was originally created by the same team that made the also defunct video-sharing app Vine.