AppleInsider
Posted: February 27, 2020 8:35PM
in iPad edited February 2020
According to sources familiar with the matter, Apple is releasing an iPad Pro keyboard with a trackpad later in 2020 to help positioning of the tablet against competitors. 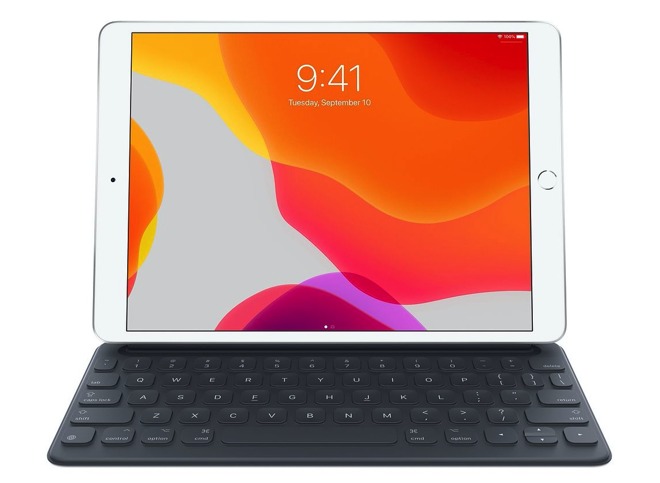 A report on Thursday afternoon claims that the keyboard is being readied for mass production by Foxconn. While most rumors suggest that there is an iPad Pro update expected in the spring of 2020, Thursday's report claims that the accessory will be released alongside an update later in 2020.

The report by The Information claims that Apple has been evaluating an iPad keyboard with a trackpad for several years. Other designs reportedly include models with capacitive keys that "mimic the response of mechanical keys but with sensors."

The keyboard is expected to be made of the same materials as the existing Smart Keyboard Folio for the iPad Pro. No discussion was made about keyboard and trackpad layout on the case, but presumably it would mimic the MacBook Air layout with a keyboard above the trackpad on the device.

Apple would have to formalize cursor input device access, though. At present, mouse and trackpad compatibility is toggled in the Accessibility menu, and pointing precision isn't notably larger than what a finger would provide.

Rumors surrounding the 2020 refresh of the iPad Pro lineup suggest it could follow the iPhone 11 lineup by having a square camera bump and a triple-camera setup, along with some speculation of it having a glass back. Models with 11-inch and 12.9-inch displays are thought to be on the way, and use the A13X chip.

Some supply chain sources have suggested Apple could introduce a 12-inch model, though it is unclear if that will occur due to the closeness to the 12.9-inch form factor that has been a mainstay for the product line.

There has also been speculation for a release of the iPad Pro later in 2020, equipped with a Mini LED display.
«12»