AppleInsider
Posted: April 1, 2020 10:27AM
in General Discussion edited April 2022
The Apple of 1976 should be unrecognizable compared to today's gigantic corporation, and yet key early decisions by Steve Jobs, Steve Wozniak, and more, are still having their effect today. 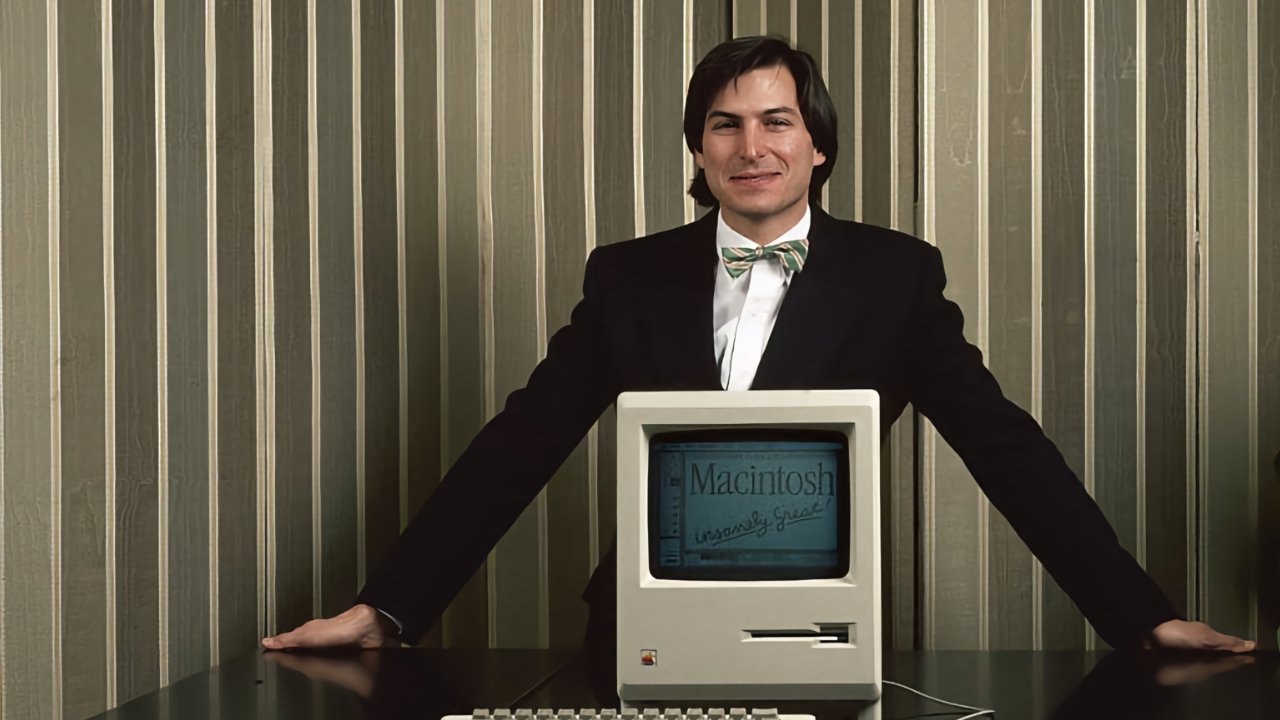 Steve Jobs with the original Macintosh, made eight years after Apple's founding

Tim Cook marked the 45th anniversary of Apple with a tweet looking back to his friend and colleague, co-founder Steve Jobs.

As Apple celebrates 45 years today, I'm reminded of Steve's words from many years ago: "It's been an amazing journey so far, yet we have barely begun." Thanks to every member of our Apple family for all you've done to enrich lives. Here's to the next 45 years & beyond!

Now in his tenth year as CEO, Tim Cook first joined Apple in 1998. The company was 22 years old then, and heading into a resurgence with the return of Jobs. It had already had most of its growing pains, but was yet to be the powerhouse company it would become.

Today Apple is in the third act of its story. Back in the 1970s, it had its exciting first act, then it went through turmoil in the 1990s for its second, before ultimately becoming the textbook American success story. You can start a multinational, multi-billion dollar company in a garage.

It's not as if starting a company was the obvious move, however. In the mid 1970s, Steve Wozniak had designs for what became known as the Apple I computer, and his friend Steve Jobs had designs on selling them. Woz would've given them away to anyone interested, Jobs would not, and even so, even Steve Jobs did not set out to make a company.

Instead, both of the Steves first tried very hard to sell their ideas to the existing firms they either worked for then or had worked for. Woz was an engineer at Hewlett-Packard at the time, and he managed to get senior engineers to examine his design with a view to HP buying them.

Not only did they agree that it was workable, they also recognized that it could made cheaply -- yet still they passed on it. Woz's ideas didn't fit with what they thought a Hewlett-Packard computer should be.

Atari felt the same. Jobs attempted to get his old employer Atari interested in what would become the Apple II, but he too was rejected. Except that Atari's Al Alcorn put Jobs in touch with venture capitalists, and the road to forming a company was begun.

When they did formally found Apple, it was with another Atari engineer, Ron Wayne. He would famously design the original, immensely ornate Apple logo, and then he would even more famously leave the company before it took off. It's just that he left even faster than you might imagine.

The three men officially formed Apple on April 1, 1976, and Ron Wayne resigned 12 days later. He'd been offered ten percent of Apple, but chose instead to be bought out by Steve Jobs for $800.

That would later be increased as the far more experienced businessman Mark Markkula came on board in 1977 as an investor. Under Markkula, the Apple corporation officially bought out all three of the original partners, for a total of $5,308.96. For legal reasons, Wayne got a third of that despite having already left. 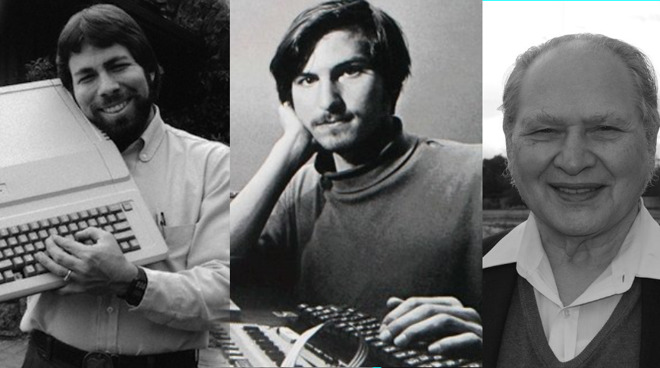 It's impossible not to now see his leaving as a mistake, given Apple's overwhelming success. But at the time, he was paid reasonably and he was leaving a firm that had far from a certain future. Amongst the countless times he's been asked about his departure, Ron Wayne claimed in 2013 that he had no regrets at all.

After he left but before Markkula turned it into a grownup company, Apple did have its first success -- and it was one that will seem familiar if you follow how the company works today. Apple made 50 Apple-I computers without having any money whatsoever, and it sold them all one day before having to pay its suppliers.

Today Apple has a supremely well-managed approach to its supply chain, but even in 1976 it was literally learning the benefits of finance. It was the first time Steve Jobs had ever heard of what was called 30 days net, meaning you had that long to pay your suppliers. He learned it then because he had to.

Jobs had pitched the Apple-I to Paul Terrell, who was running the then successful Byte Shop. While Jobs wanted to sell the motherboards and kits to have hobbyists make up their own computers, Terrell wanted assembled devices and he got them.

If Apple learned then about finance and supply chains, it learned about business in 1977 when ex-Intel Markkula came on board. As well as reorganizing the business, though, he did something else that is still part of Apple more than four decades later. He set down the company's philosophy.

It's probably part of Business 101 at Harvard that corporations need philosophies, and mission statements, and if you've ever worked for a corporation, you're likely to have a healthily skeptical attitude to them. Yet in Apple's case, the philosophy Markkula wrote was remarkably clear, and the company has stuck to it remarkably consistently. 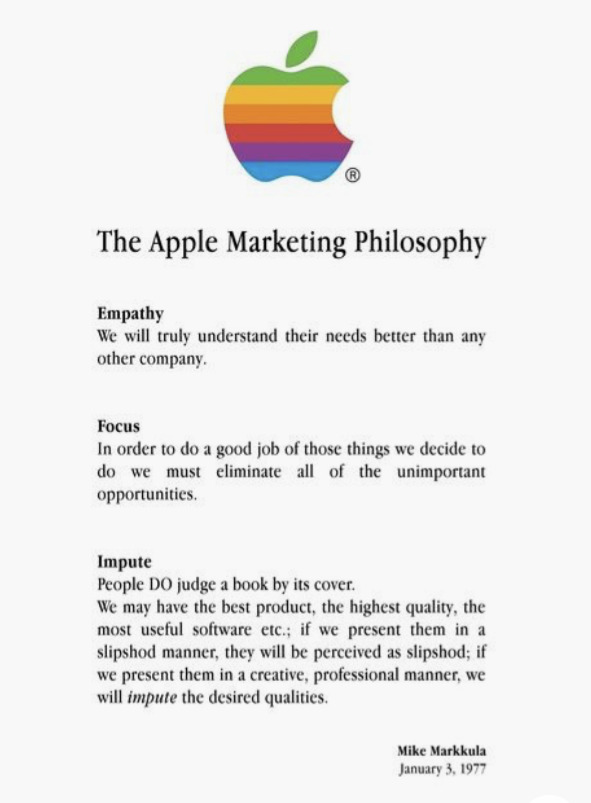 Steve Jobs would later explain to his biographer Walter Isaacson, that Markkula's point was that making money shouldn't be the goal. You obviously need to, and you even more obviously want to, but if money is the first thought, the company will struggle. Whereas if you make "something you believe in" and you also concentrate on "making a company that will last," the money will follow.

Markkula's "The Apple Marketing Philosophy" is so clearly an Apple idea because it is extremely and consciously simple. The one-page document, written on January 3, 1977, has only two short directives about understand customer needs, and focusing on a few specific products instead of spreading itself too thinly.

Then it concludes with a paragraph about conveying Apple to its customers.

To this day, Apple is known for how well it presents its products, how carefully designed the packaging is. Today, that is still part of what makes Apple, Apple.

And it was there, written into the company, right from its very beginnings.