AppleInsider
Posted: April 14, 2020 8:59PM
in General Discussion edited April 2020
Eufy is readying a new HomeKit capable security camera -- the eufy Indoor Cam 2 -- that comes in a stationary model as well as a pan-and-tilt variant for launch in mid-May with preorders starting on April 17. 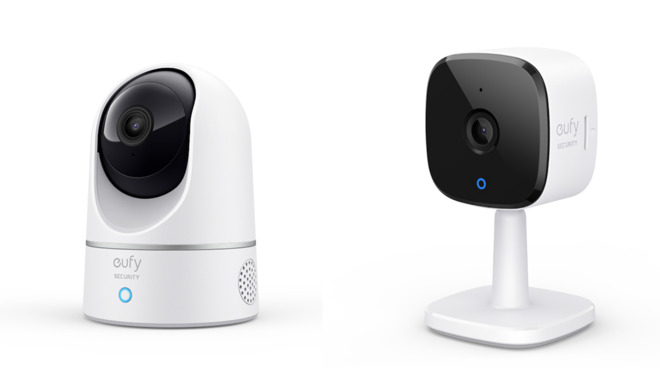 The new camera packs a wealth of features in a surprisingly affordable package. It can capture footage at 2K resolution with enhanced night vision and a 125-degree field of view. Footage is saved locally on micro SD cards up to 128GB. Cloud storage is also an option at a small fee following a month-long free trial.

Both models support 8X digital zoom, record at 15 frames per second and use eight integrated infrared LEDs to assist its night vision.

The pan-and-tilt model has a 360-degree range of motion with 100 degrees of vertical motion.

It appears that the cameras will simply support rudimentary HomeKit support at launch. That means video can be viewed in the Home app, motion sensors can be used to trigger events, and you can check in on the camera via Siri. Following launch, eufy will be rolling out support for HomeKit Secure Video which enables much more functionality including storage of encrypted footage securely within iCloud.

Both versions will go up for preorder on April 17. They will run $39.99 for the standing version and $49.99 for the pan-and-tilt version.