AppleInsider
Posted: May 16, 2020 2:00PM
in iOS
Apple and Google have become the targets of a lawsuit from game publisher Ubisoft, for allowing the sale of an alleged clone of a "Tom Clancy's Rainbow Six" game in the App Store produced by a subsidiary of Alibaba. 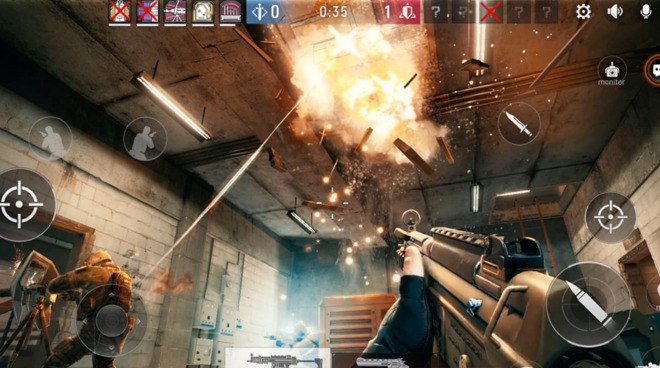 In a lawsuit filed on Friday in a Los Angeles federal court, Ubisoft claims the game "Area F2" is a "near carbon copy" of its own game, "Rainbow Six: Siege," one that can't "seriously be disputed" by observers. The clone game makers are said to have kept it as close to the original as possible, with minimal efforts made to make it as legally different from Ubisoft's game as possible.

"Virtually every aspect of AF2 is copied from R6S," Ubisoft alleges in the lawsuit, as reported by Bloomberg, "from the operator selection screen to the final scoring screen, and everything in between."

The Rainbow Six series is a close-quarters battle game, a first-person shooter where teams of players must either storm a location and wipe out the enemy, or defend themselves from another team's storming attempt. Area F2 takes advantage of the lack of a mobile version of Ubisoft's PC and console game, offering similar gameplay but on a smaller screen.

"Ubisoft's competitors are constantly looking for ways to piggyback on R6S's popularity and to capture the attention, and money, of R6S players," the suit continues.

"Rainbow Six: Siege" is a major game for Ubisoft, with 55 million registered players globally and more than 3 million daily players. The game is also played in esports competitions, with professional teams taking each other on in tournaments for prizes stretching to millions of dollars.

AF2 is produced by Qookka Games, a trading name of developer Ejoy which was acquired by Alibaba in 2017. An unusual facet to the lawsuit is the target, as instead of going after Ejoy or Alibaba, Ubisoft is instead going after Apple and Google.

By attacking Apple and Google in court, it seems that Ubisoft is attempting to prevent the sale of the clone in their digital storefronts. AF2 became available to download from the App Store in April, following an extensive promotion campaign by Ejoy in late 2019.

Neither Alibaba, Google, nor Apple have commented on the lawsuit so far.
«12»