AppleInsider
Posted: June 9, 2020 1:32PM
in General Discussion
Apple has updated its COVID-19 screening app with an option to anonymously share information with the company plus health authorities to improve the app and gather data about coronavirus. 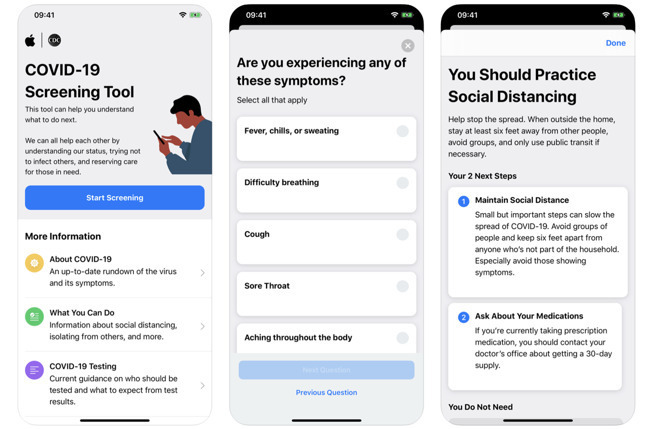 The COVID-19 screening tool, which shouldn't be confused with the Apple-Google Exposure Notification API, was released in March as an educational hub for coronavirus information.

As noted by TechCrunch, the new update allows users to anonymously share data with state public health agencies and the Centers for Disease Control and Prevention (CDC), along with Apple.

That includes a user's age, symptoms and other data that Apple says will be used to improve the COVID-19 screening app and to help health officials better understand the virus.

Apple makes it clear that this data is shared in a way that won't personally identify users. It'll also be aggregated as an additional privacy mechanism.

The COVID-19 screening tool is meant to help users stay informed by answering questions about recent exposure and symptoms and reading guidelines from the CDC. It's been updated with new features and information several times since March. Past updates added self-care tips and updated COVID-19 symptoms.

Apple developed the tool, which is also available as a website, in collaboration with the CDC and the White House Coronavirus Task Force.
«12»