AppleInsider
Posted: June 24, 2020 4:23PM
in macOS edited September 2020
To support the Apple Silicon Macs shipping by the end of 2020, the company is sending developers a transition kit to help them prepare code to run on the new architecture. The new box effectively shoehorns an upgraded iPad Pro into a Mac mini box. Here's why. 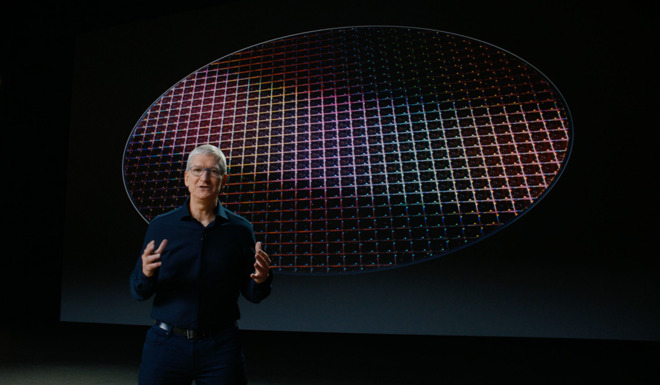 It wasn't exactly a surprise that Apple announced plans to move its Mac lineup to its own custom silicon. The company dropped some clues about its plans at last year's WWDC, and we subsequently detailed why Apple's Macs can ditch Intel x86 and shift to ARM .

A lot of us assumed, however, that Apple's latest SoCs used in iPhones and iPad Pro would need to be significantly overhauled to power even the most basic MacBooks, and that Apple's higher-end desktop Macs might stick with Intel processors entirely. Surely the benchmarks showing that Apple's A12Z is faster than most PC laptops was some sort of marketing delusion!

However, the more we learn about Apple's existing SoCs, and the Apple Silicon effort as a whole, the more confidence we have that Apple is indeed beating Intel in many respects already. The idea that Apple's custom silicon can only handle "mobile" workloads is the same sort of disparaging presumption that fueled the dismissive notion that iPads were only "media consumption devices" and not "real" on some level.

Now that Apple has completed the work to move macOS Big Sur and all of its own apps to run on Apple Silicon -- effectively on an arm64 CPU, but with support for Apple GPU, the Neural Engine, and all of the other components built into its custom SoC -- it's effectively possible to host the Mac desktop on an iPad. But there is a catch.

iPad is designed to be light and thin and sport all-day battery life. One of the things that contributes to this highly mobile efficiency in form and function is the ultra-conservative use of RAM in its iPadOS, which it inherited from iOS. The less RAM the system needs, the less RAM Apple can pack into the design. Fewer RAM chips on the device directly results in lower battery drain. We used to point this out and once got lots of flack about it, but even Microsoft came out and agreed that "more RAM" wasn't always a good thing, particularly on a mobile device.

In fact, the reality of RAM power consumption was a primary reason why Apple made a series of "courageous" engineering decisions that resulted in iOS needing considerably less RAM than Android, Windows, or the Mac. The downside was that low RAM consumption also resulted in limitations to how many apps could run at once, or linger in the background, among other things. That's also why Apple never positioned iPad as being a "no compromise" full PC replacement. Real engineering demands decisive compromise.

Apple radically optimized iOS for mobility and extended battery life, which involved decisions that were once controversial. Yet in hindsight, the ultra-conservative RAM use in iOS was absolutely the correct decision and it made it incredibly hard for Android or Windows licensees to match the performance and power efficiency of iPhones and iPads. Less was literally more.

Some Macs are also light and thin and boast longer battery life, but even Apple's MacBook Air sets its lower RAM limit at 8GB, and really wants you to order 16GB. A Mac mini will also let you order 8GB, but it provides expansion slots that let you install 16GB, 32GB, or even 64GB. In contrast, Apple's fanciest 2020 iPad Pro ships with just 6GB or RAM, with no expansion option. Earlier iPads have shipped with 4GB or less. Apple's marketing pages for iPad make no comment on how much RAM they include.

While iOS is carefully conservative with memory, the macOS generally hogs up as much RAM as you can throw at it. Beyond exploiting the RAM chips you install, macOS also makes even more room available by liberally swapping out anything you don't immediately need in RAM to the virtual memory backing store on your storage device, then pages it back in as needed.

iOS also has virtual memory, but no backing store. When the system runs short of RAM, it tells apps to free up space. If they don't do it fast enough, they're terminated. This is a radical difference in operation. Paging data from RAM to disk and back is energy-intensive and slows down the system. That makes sense on a conventional computer, but not on a mobile device.

So while Apple has done the work to translate all of its macOS Big Sur code to run on the Apple Silicon architecture of its iPads, that tablet hardware is not at all optimized to run macOS. The solution is pretty simple: add more RAM. Apple is shipping the Developer Transition Kit with 16GB of RAM, which is comfortable for a Mac but would be devastating to the battery of an iPad.

Apple also detailed that its Developer Transition Kit provides USB 3 connectivity over USB-C, as well a legacy USB-A ports and HDMI. This looks a bit like a Mac mini, but it's really iPad Pro connectivity. New Mac minis support Thunderbolt 3, which can drive up to four 4K DisplayPort screens and support devices such as RAID storage and eGPU expansion. Thunderbolt 3 is an Intel specification that effectively works like a PCIe slot in the form of a cable. Supporting Thunderbolt 3 connectivity requires an Intel controller chip.

Most iOS devices only provide USB 2 speeds, as well as support for a single 1080p HDMI video output, USB storage, and networking, all though Apple's proprietary Lightning port using a dongle or a special cable. The newest iPad Pro models sport a USB C port which can handle the faster USB 3 specification and up to 4K video output using a USB-C DisplayPort monitor--as long as the display doesn't also require Thunderbolt 3.

This makes it pretty clear that the Developer Transition Kit isn't a Mac mini outfitted with an Apple Silicon SoC, but rather an iPad Pro logic board hooked up to multiple USB ports, Ethernet, and HDMI for convenience. It sports the same Bluetooth 5.0 and 802.11ac WiFi, and can attach to an SSD for storage using USB-C internally. 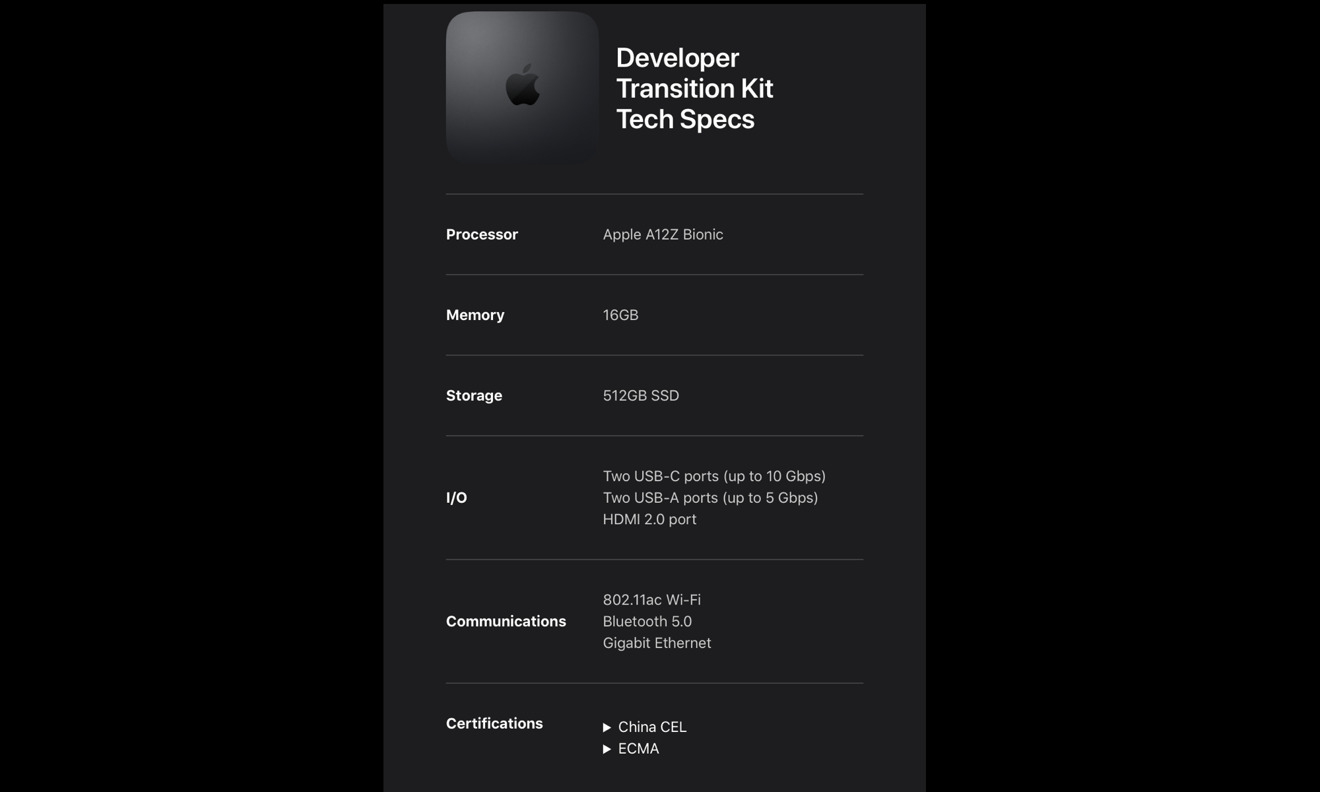 In various WWDC videos, Apple demonstrated what appears to be the Developer Transition Kit driving a 6K Pro Display XDR. Of course, nobody would buy a 6K display and run it off an iPad Pro at 4K, because it would be ridiculously expensive and it wouldn't actually work, nor make any sense. But Apple could either be using a custom Apple Silicon Mac prototype or simply be using its fancy display either as a prop or hacked to support lower-resolution USB-C video output. Don't try this at home because it won't work.

That means Apple could add USB 4 support to its upcoming SoCs and move both Apple Silicon Macs and the rest of its iOS and iPad lineup from Lighting to USB-C ports, potentially all with Thunderbolt 3 speeds.

Still a No to convergence

This doesn't mean that Apple's platforms are converging, however. The Mac remains optimized to work in a conventional computing desktop, driven largely by a keyboard and precise pointer rather than touch screens. There's no evidence that Apple is evaluating a shift to make its Mac displays into touchscreens, for example. That also indicates that Apple Pencil is not coming to the Mac anytime soon, nor will MacBook screens begin detaching to turn into an oddly shaped tablet, just because everyone else is trying that out.

Apple has expanded the use cases of iPad Pro by adding new keyboard options and support for a new touchpad, point-driven integration with a touch-focused interface. But there's also a lot of Mac features that don't need to come to iPad, and would actually erode its value in terms of portability, simplicity, and power efficiency.

The other significant takeaway is that Apple's existing custom silicon has been purposely optimized for iOS and iPadOS, so we don't yet have a full understanding of how well the current A12Z will perform when its given significantly more memory and totally different OS tuned to do very different work, without the need to conserve battery power as stridently. It certainly appears that without the constraints of the iPad Pro, Apple Silicon is already more powerful than we expected it to be.

That's particularly true because iOS is also highly optimized for single-core performance-- specifically to deliver a responsive UI-- despite the eight CPU cores available on the existing A12Z. Inside a desktop box that's plugged in, macOS has the ability to crank on all four performance cores at once and drive them at full speed. It could potentially even light up all eight, with advanced thread management that prioritizes scheduling to deliver a wildly fast user interface while you're using it, or full power number-crunching when you're waiting for a processor-intensive task to complete, with lower priority tasks occurring on the efficiency cores in the background.

And beyond the Developer Transition Kit, the first Apple Silicon Macs to hit the market could deliver even greater gains as they move to the next generation of SoCs benefitting from additional optimizations to specifically support the needs of macOS. It's even possible that some Mac models will incorporate multiple SoCs to maximize available cores and deliver more powerful graphics. Apple's Mac Pro already pairs two AMD GPUs along similar lines.

Apple's future Intel Macs may also shift from the existing T2 helper chip to incorporating a full Apple SoC to provide them with access to resources including the Apple GPU, Neural Engine, and other features. It might even be cheaper to mass-produce a single high-performance SoC in massive quantities rather than designing a series of custom chips that are each only used in a few million Macs.

There's a lot left to discover, but things sure are getting interesting.