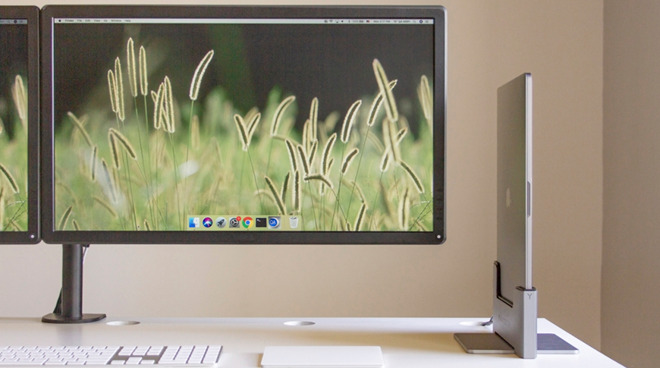 Brydge, known for the Brydge Pro+ iPad keyboard that featured a trackpad, is expanding its Vertical Dock lineup, with plans to support all current-line MacBook models.

The docks employ a moving, suspended liner that allows for one-handed docking and undocking. They also allow for dual-display setups for those who require more screen space for their projects.

Once docked, a MacBook Air or MacBook Pro will be instantly connected via two Thunderbolt 3 connections at a full 40 gigabits per second. Intake and exhaust vents will provide additional cooling, which can be critical when running in clamshell mode.

"Since our acquisition of Henge Docks in September 2019, we've been hard at work reengineering and expanding our Vertical Dock line," said Nicholas Smith, Co-CEO and founder of Brydge.

The 16-inch MacBook Pro and the 13-inch MacBook Air Vertical Docks will be shipping in October, though customers can request to be informed when these docks go on sale.