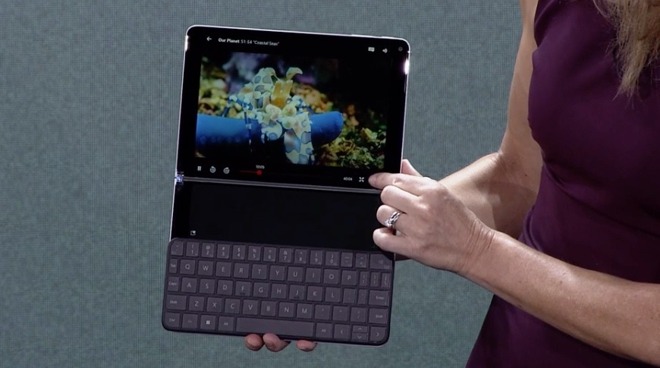 The plan to try and reinvigorate Windows on tablets, notebooks, and smartphones was first introduced in late 2019, when Microsoft teased the Surface Neo, a tablet that used a pair of nine-inch displays on a 360-degree hinge. At the same time, it suggested a smaller version of the same style of device called the Surface Duo was also on the cards, consisting of a smartphone with two 5.6-inch screens.

While Microsoft initially claimed it was pressing for the two devices to ship by the end of the year, rumors from April 2020 indicated Microsoft wasn't going to be shipping the products in 2020 at all. Now, a report from ZDNet claims Microsoft's software for the project won't even make it to release in 2020.

According to the report, the first Windows 10X-based single-screened devices designed primarily for business use and education is tipped to ship in the spring of 2021. Dual-screen variants are thought to be coming out in early 2022.

Windows 10X is not Windows 10, but a variant codenamed "Lite" or "Santorini" that is more modular in its construction. Designed initially for the Surface Neo, but intended for use on many different devices from a variety of vendors, the operating system sports a simpler interface and various hooks in place to enable dual-screen computing.

To spur development of Windows 10X, the sources claim Microsoft is considering limiting the feature updates for Windows 10 to one update per year, enabling developers to work on both operating systems at the same time. Speculation has Windows 10X feature updates taking place during the first half of each year, while Windows 10 feature changes would be set for the second half.

While the development of Windows 10X, as well as hardware like the ARM-based Surface Neo and Duo, will enable Microsoft to have a chance at competing in the mobile computing space, it does so while having to contend with Apple's products. Along with its existing work with ARM chips in the iPhone and iPad ranges, Apple is also wholesale making a shift away from Intel processors to its self-designed Apple Silicon, a change that is likely to cause massive waves throughout the computing industry.

The development of an ARM-based version of Windows offers some hope to users who take advantage of facilities such as Boot Camp in macOS to run Windows-based apps on their Mac. As Rosetta 2 lacks support for x86 virtualization, Boot Camp simply won't be available on Apple Silicon Macs, leaving consumers needing to hold on to Intel-based Macs for a while longer, to acquire Windows-compatible hardware, wait for an ARM-compatible Windows release, or hope that developers embrace Windows 10X which stand a far better chance of being supported.
«12»