AppleInsider
Posted: August 31, 2020 6:19PM
in Future Apple Hardware edited August 2020
Apple's long-rumored "AirTags" may finally launch before the end of 2020, with a report claiming Apple will be launching the item-tracking accessories during an event in late October. 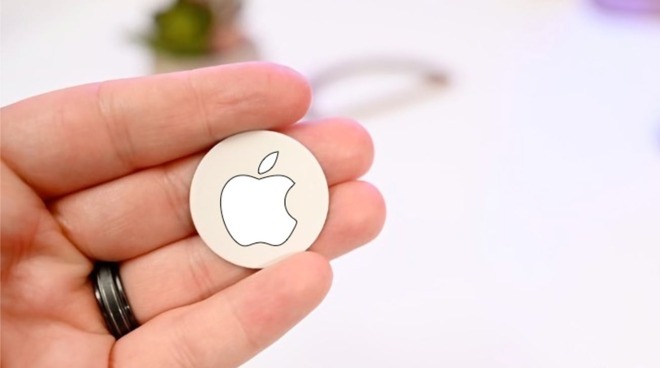 Apple is preparing to launch the "iPhone 12" in an online event in the coming weeks, and as is typical for the event, Apple is anticipated to also launch other products at the same time. According to one report, one of the products in question could be "AirTags."

An unknown Chinese supplier provided information to Mac Otakara that Apple was getting ready to publicly announce the product during the "iPhone 12" event, alongside a new "Apple Watch Series 6."

The same source also alleged the usual September event would take place later than planned, with it predicted to happen in the second half of October. Other rumors have suggested similar October timing for the "iPhone 12" launch, though others have also put forward the idea that the event will continue in September as usual.

"AirTags" were originally believed to be prepared for launch earlier in 2020, but that was pulled due to circumstances beyond Apple's control, such as the COVID-19 pandemic. Leaks such as details buried inside iOS 14 also suggest a launch is happening soon.

The accessory is intended to help users find lost items, and is thought to resemble a small disc that can attach to objects, such as a keychain. Using the Find My app, users will be able to take advantage of the built-in U1 chip and ultra-wideband signals to find where the tag and connected item are located, in a similar manner to how a misplaced iPhone or iPad could be relocated.

Rumors have pointed to the use of an augmented reality-style interface, where users can view an icon on a real-time view of the room to see where the tag should be in physical space.

The system would also work out in the world without needing a cellular connection or GPS in the tag itself, by silently pinging iPhones with U1 chips passing nearby the tag without notifying the tag or iPhone owners. Secured with encryption, the pings would help determine the AirTag's location for the owner when they check the Find My app.