Bose Smart Soundbar 300 with AirPlay 2 support up for preorder 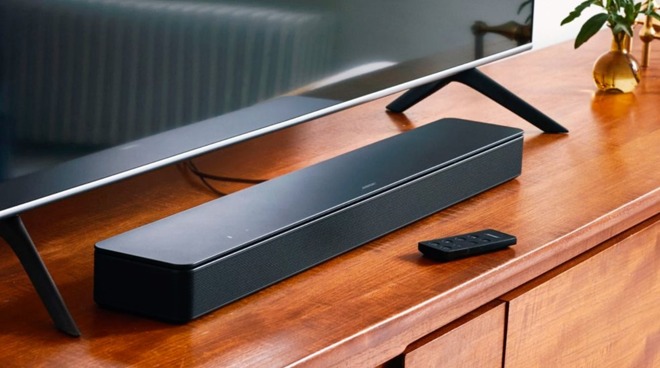 Following on from the Soundbar 500 and Soundbar 700, the Smart Soundbar 300 is a lower-priced option that offers spacious sound and rich bass, while also building in smart functionality. Packing in four full-range drivers for separate left and right sounds, the soundbar measures just over 2 inches tall, making it slimline while offering a big sound.

As part of its smart functionality, Bose has included support for Apple's AirPlay 2, enabling it to be used to stream audio from iPhones and other Apple ecosystem devices, including the Apple TV 4K. Connecting over WI-Fi and Bluetooth, it also includes support for Spotify Connect, and can work with other Bose speakers independently of AirPlay 2.

This inter-speaker support also includes the Bose Bass Module 500 and the Bose Surround Speakers, which can help turn the soundbar into a bigger home cinema system.

Connecting to the television with HDMI ARC or optical audio cables, the soundbar also pairs with a number of compatible Bose headphones, so audio can be piped through without being played to the rest of the house. It is also controllable via the Bose Music app, which can be used to set up the soundbar and control audio playback though a wide variety of music services.

The soundbar also includes Bose's Voice4Video technology, which allows commands for Amazon Alexa and Google Assistant to be heard clearly by the digital assistants. This includes a noise-rejecting mic system that listens in all directions, even with the soundbar playing loudly, though it can also be disabled anytime with the dedicated microphone switch.

Available for preorder with shipments set to commence from September 15, the Bose Smart Soundbar 300 is priced at $399.95.