AppleInsider
Posted: September 15, 2020 7:09PM
in General Discussion
Apple CEO Tim Cook said that Apple has sold more than 500 million iPads in the decade since it debuted its very first tablet, marking the first time it has revealed iPad sales numbers in two years. 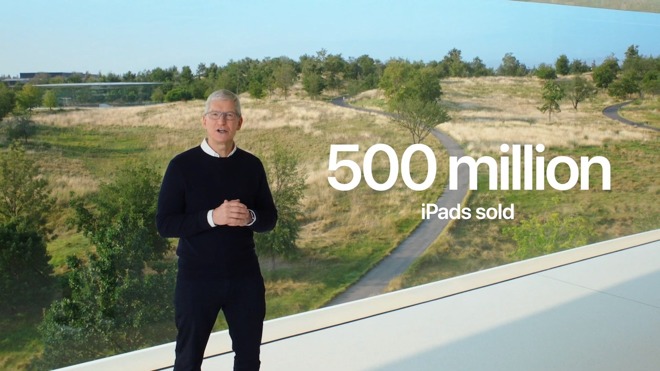 Tim Cook made that announcement during Apple's "Time Flies" event on Tuesday. It's the first real confirmation of iPad sales since Apple stopped reporting individual unit sales in November 2018.

On Tuesday, Cook revealed the hard numbers ahead of Apple's announcement of new 10.2-inch iPad and iPad Air models. He also added that 52% of customers were new to the iPad, and that the tablet lineup was ranked first among competitors in customer satisfaction.

Late Apple cofounder and CEO Steve Jobs announced the company's very first tablet in January 2010 ahead of an April launch.

The device, which weighed 1.5 pounds, was described as "way better than a laptop, way better than a phone" at the time. It pack an 1GHz Apple A4 processor, a 9.7-inch display, and up to 64GB of built-in storage. It received mostly positive reviews after its debut.

Since then, the iPad has seen its share of ups and downs. Since 2018, sales of the tablet have been on the decline, though in 2020, the rise of remote learning and work during coronavirus pandemic has given the lineup a tailwind.

On Tuesday, Apple refreshed the iPad Air by bringing a suite of "iPad Pro" features to the product, including a 10.9-inch LCD display with slimmer bezels; a USB-C connector; a Touch ID sensor built into the power button; and an all-new A14 Bionic chipset based on a 5nm production process. The lower-cost iPad also received an update with the 8th-generation, bringing an A12 Bionic CPU.

Earlier in 2020, Apple refreshed its iPad Pro lineup with new LiDAR capabilities and a Magic Keyboard with Trackpad.