Why the iPhone 12 Pro is worth the upgrade cost

AppleInsider
Posted: October 26, 2020 5:17PM
in iPhone
Putting the iPhone 12 Pro through its paces in the real world really shows why it's worth the extra cost over an iPhone 12. 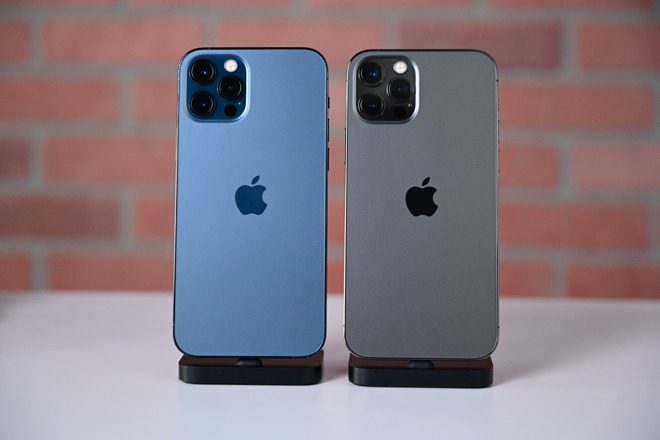 It's more than surface deep

The new iPhone 12 Pro of course offers more features than its predecessors, but before you even notice any of those, you immediately see -- and feel -- how it has all been physically redesigned. As with all the iPhone 12 range, it has the iPad Pro-style flat edges, and they make it remarkably appealing to hold.

Then with the iPhone 12 Pro, Apple retained the stainless steel frame but has four new colors. What's been less well reported, though, is that even the colors that we thought we'd seen before, such as silver and gold, have a subtly different -- and better -- look.

For instance, the silver version, which has the white glass back, is now lighter than before. The gold has a new finish to make the color more substantial around the edge, and this also makes it more resistant to fingerprints. Unfortunately, the darker colors remain fingerprint magnets. 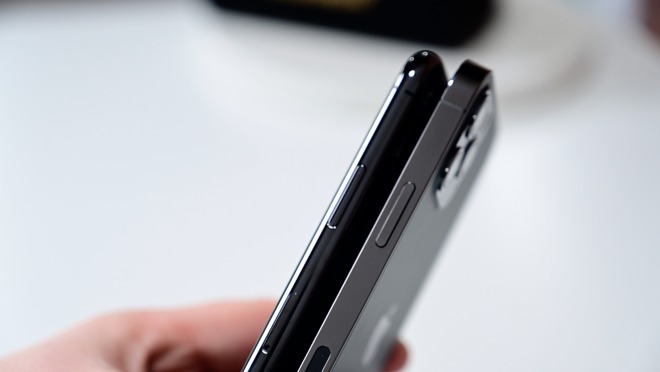 Then we have graphite which is a variant of Apple's space gray. Again, it is slightly lighter around the frame, just as the Apple Watch Series 6 stainless steel that went from space black go graphite this year. 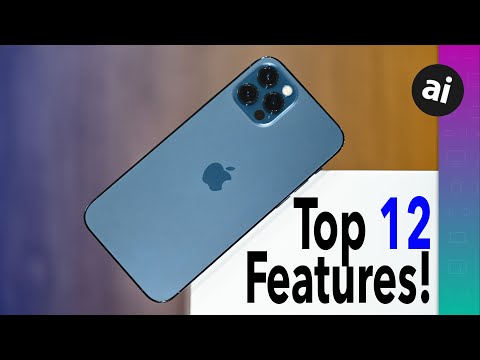 Whereas Pacific Blue is entirely new. It replaces last year's green and, at least anecdotally, appears to be a particularly popular option. There's a slight slate-color tint to the blue on the iPhone 12 Pro, and it's gorgeous enough that you will keep staring at it until you put the phone in a case.

To go with these brand new colors, and improved existing ones, are new exclusive wallpapers. Apple has created four new live wallpapers for the iPhone 12 Pro line that match the phone colors, and move. Hold your finger on the lock screen and these images animate as if they have lens flares.

You can point to the finer color and, actually, to the brighter screen, to say there are variations between the iPhone 12 and the iPhone 12 Pro, but the real differences are in the new photo and video capabilities on the new iPhone 12 Pro.

Such as the addition of Dolby Vision recording at 60 frames per second, as opposed to the 30fps of the iPhone 12. The inclusion of Dolby Vision at all is a feat, and it means that these two smartphones are the first in the world on which you can shoot, edit, and share 4K Dolby Vision HDR.

However, if you are going to benefit from Dolby Vision, it feels wrong to hamper yourself with the 30fps version. The iPhone 12 Pro's 60fps is certainly better, and makes greater use of the potential of Dolby Vision recording.

What's more, in real-world use, it is as easy as you'd want and expect it to be. 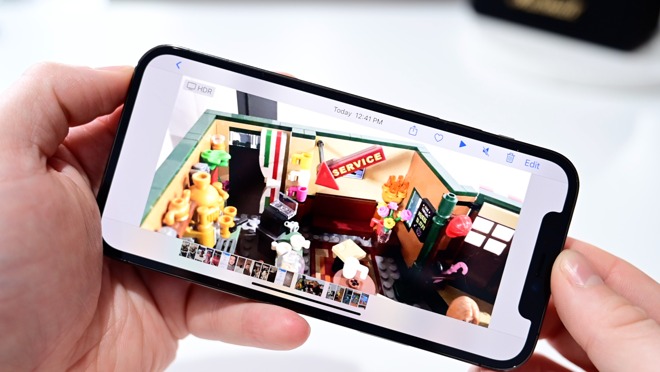 When you come to play or edit it, you can immediately tell that footage was shot in Dolby Vision because it is marked with an HDR watermark in the top-left corner of the video app. Similarly, if you edit in the Photos app, you'll see the display get brighter as it starts to display this footage.

It all looks very good when played on an HDR-capable display, but can be toggled off if you don't wish to capture it and take up all the storage space it requires.

Another frankly amazing feature we explored was night mode portraits on the iPhone 12 Pro. This night mode feature came with the iPhone 11 line, and it already allowed you take long-exposure shots in very low light situations. With iPhone 12 Pro, though, that same functionality comes to portrait shots.

When you switch to portrait mode in the Camera app and go to take a pic in a very low-light environment, you will see the night mode icon in the lower-left corner where the 1X and 2X indicators are.

You can't zoom in and keep this portrait effect, you have to take the shot at 1X. Explain to your subject that you have to step closer. That's because for this type of shot it needs the new faster aperture of the wide-angle camera rather than that on the 2X tele lens.

For the iPhone 12 Pro, Apple increased the aperture from f/1.8 to f/1.6 which allows more light in and allows the shutter to fire faster. The new LiDAR scanner is also used because it allows the camera to focus in near pitch-black environments. 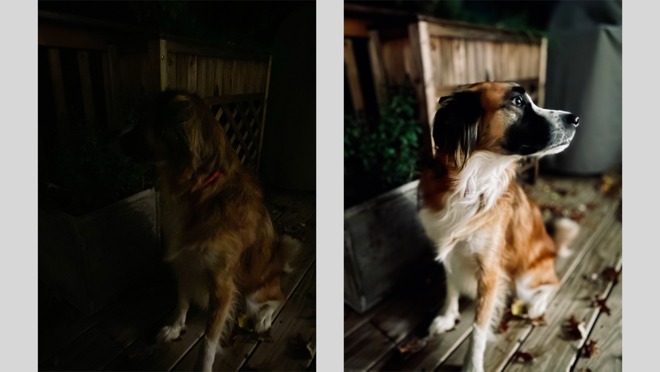 We will have a more comprehensive comparison soon, but we did take a quick set of example shots using portrait mode on our iPhone 11 Pro and iPhone 12 Pro. The iPhone 11 Pro wasn't able to enable portrait mode at all so it just captured a normal image.

Naturally, that image came out very, very dark and completely unusable. On the other hand, iPhone 12 Pro captured a very impressive image in almost no light.

Aside from night mode coming to all cameras -- notably including the front-facing True Depth or selfie one -- Apple has improved the ultra-wide lens. There's also a new lens correction that's applied in order to deal with the quite excessive distortion that could be present before. Once more, see our sample shot took on iPhone 11 Pro and iPhone 12 Pro to see how much of a difference this has made.

As important and visibly improved as the new lens and camera systems are, it's this combination of corrections and software control that make the iPhone 12 Pro such a good buy for photographers. That's only going to become even truer, too, when the promised Apple ProRAW format comes out.

We'll know for sure when it's released and we can test it in the real world. However, Apple ProRAW is claimed to take all of the advantages of shooting RAW, of using uncompressed images, and applying Apple's computational photography algorithms to get the very finest results possible.

That represents about a 20 percent improvement on the single-core score and about 15 percent gain on the multi-core. These are the kinds of improvements that don't just sound good on paper, you can actually appreciate them in real use. 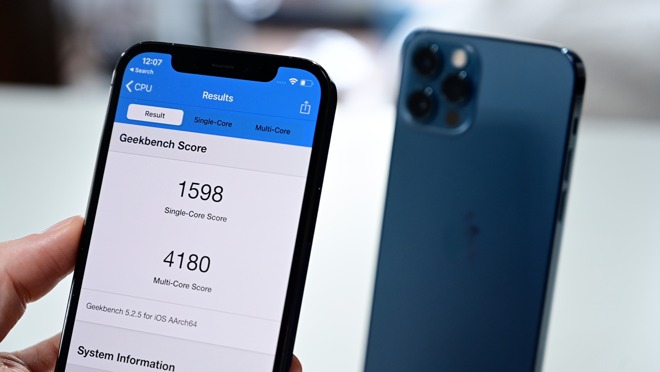 That's going to apply to everything you do on the phone as most tasks are single-core, so this iPhone 12 Pro feels more snappy in daily use. But it's particularly noticeable in video and photo editing, which is faster even when you're dealing with 4K 60FPS content.

Most of these internal differences are also in the iPhone 12, but Apple has given the iPhone 12 Pro an extra 2GB of RAM, bringing it to 6GB. This directly aids with specific tasks like loading apps from the background, many Safari tabs, and more. Storage was doubled too, going from 64Gb on the base model to 128GB at the same price point.

Of course, 5G is also an internal upgrade, supporting both sub-6GHz and mmWave 5G here in the US, and sub-6GHz elsewhere.

Key to the new iPhone 12 range is MagSafe. AppleInsider has already taken a deep dive into what it is and what it does as well as going hands on with the charger and Apple's silicone cases. 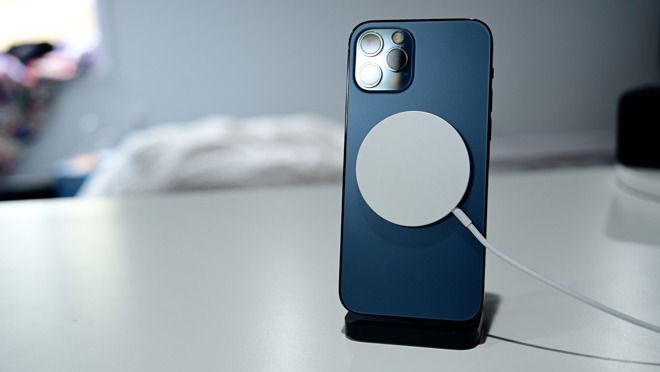 In terms of what it means for the iPhone 12 Pro, though, MagSafe is poised to be a massive new feature. You're going to see a huge increase in the iPhone ecosystem between cases, chargers, mounts, wallets, cases, folios, PopSockets, and more, which are all on their way.

Right now, our real world tests with the iPhone 12 Pro have been using Apple's own cases, and its own MagSafe charger.

Even based on these, though, MagSafe is a hit. The convenience of the longer lead that means you can pick up the phone without disconnecting it from the charge is a boon.

And the magnets really do instantly center the iPhone 12 Pro on the right spot to make sure it gets charged properly.

Look to the future

That's the thing about an Apple device. You can review it as it's launched, and you can properly test it out in the real world, but then it changes.

We're going to see the addition of more MagSafe devices -- such as Apple's own forthcoming device that charges both the iPhone 12 Pro and the Apple Watch -- and we're going to see Apple ProRAW soon.

At least until the "iPhone 13" comes out.