5G is a promise for the future, but isn't quite here today

AppleInsider
Posted: November 5, 2020 4:21PM
in General Discussion
While the new iPhone 12 may be the first iPhone to utilize nascent 5G technology, you may want to temper your expectations when it comes to all the supposed speed increases. 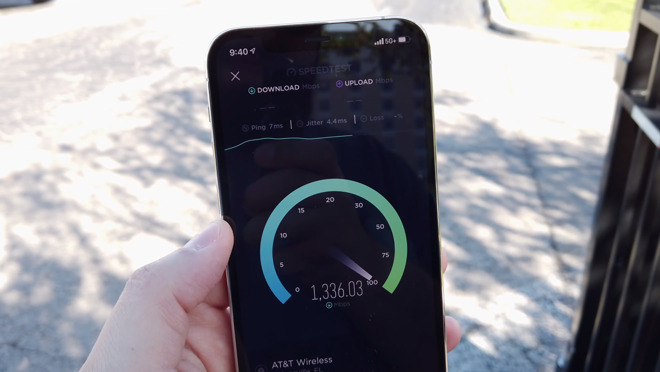 As 5G begins rolling out across the United States, many users wonder what kind of significant speed boost they'll see over 4G LTE. Apple had promised speeds of up to 4 gigabits per second, but when -- and where -- will users see those speeds?

Most of the conversation -- including that at the iPhone 12 launch -- has been centered on Verizon's 5G UltraWide band. AT&T has their own 5G mmWave -- dubbed 5G+ -- that is launching across the United States, which is the focus of our testing today. 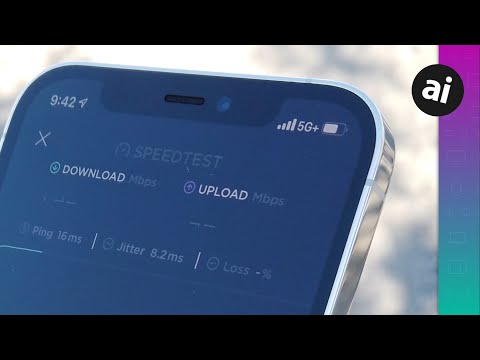 LTE, 5G, and 5G mmWave: not all frequencies are created equal

Before we delve into the results, we'd like to take a moment to point out the differences between 4G LTE, 5G, and 5G mmWave.

Typically, the lower the frequency, the more ubiquitous the signal as, as a general rule, the radio signal is attenuated less over distance or by shielding materials. For example, 4G LTE blankets most of the United States at this point, but its average download speeds are roughly 20 megabits per second on average, with some peaks in cities and other dense build-outs.

Still, LTE is durable and can be broadcasted about two miles at maximum, with very little concern for smaller or less-dense objects shielding the signal. This applies for much of 5G as well -- but not all of it.

Beyond some network infrastructure and routing improvements, 5G in the US is comprised of two broadcast frequency ranges, the sub-6 gigahertz band and the mmWave aspects.

Sub-6GHz band makes the 5G signal durable and far-reaching -- comparable to 4G LTE -- though it doesn't inherently offer breakneck download speeds. Nearly every user in nearly every condition that can see a 5G network, will see real-world speeds closer to 4G LTE. 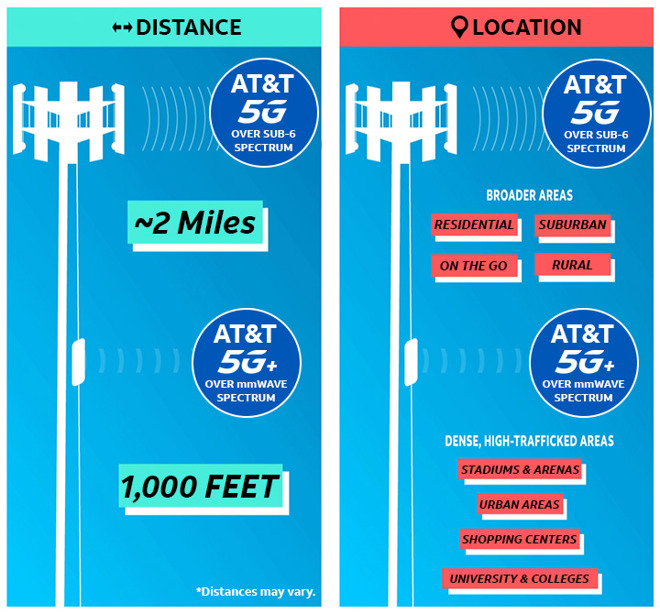 5G mmWave is the higher frequency 6GHz band, and as such, it isn't terribly penetrative. It only has a practical range of hundreds of feet and requires a clear sight line to the antenna with absolutely no obstructions. In practice, 5G mmWave is easily blocked by walls, glass, trees, rain, and even the dead skin cell layer of the human body-- meaning its use case is somewhat limited.

So while Apple has stated that it is theoretically possible for the iPhone 12 line to get up to 4Gbps per second download speeds, actual use will vary. And, they will vary greatly.

AppleInsider has written an in-depth explanation of 5G and 5G mmWave, available here, should you be interested in finding out the nuts and bolts of it.

In addition to being relatively short-range, 5G mmWave is not widespread, either. Currently, AT&T's 5G+ is available in very select locations in certain states, like California, Florida, and Arizona.

AT&T discloses this information on their website, too. They state that 5G+ won't be something that the average user will see in their homes and instead will be used to service high-traffic public places, such as stadiums, arenas, shopping centers, and college campuses.

It took AppleInsider staffer Stephen Robles a considerable amount of time to track down his AT&T 5G+ signal. With some help from AT&T, he found his closest 5G+ signal on a single street corner in Orlando, Florida.

Well, after several @ATT reps contacted me, and @rseilham confirmed the location, I went out and found 5G+ mmWave. It does exist, on exactly 1 street corner in Orlando: S Kirkland Rd and Major Ave, in the TGI Friday's parking lot. pic.twitter.com/HyKWTLfCev

Theoretically, Apple claims that you'll be able to get up to 4 gigabits per second when using a 5G mmWave band to download. While this may be true, you're not going to see those speeds in the wild, and not indoors unless there are some very specific setups, and transmitters inside the structure. When doing a simple test, Robles saw maximum of 1.6Gbps per second with a dedicated speed test, though averaged closer to 1.3Gbps per second.

However, when actually using the 5G+ to download from a server in practice, he didn't see much improvement over LTE speeds. We have borne out this result in other locations in the US as well, on other networks, including Verizon's.

This is because a speed test is as close to an ideal situation as you can get, as there is nearly unlimited bandwidth, and data is being passed between you and a datacenter located nearby. However, when connecting to a service, such as Netflix, you'll only be able to download as fast as their servers will allow.

With full mmWave 5G, Instead of a wireless connection being that bottleneck, server farms holding media and the internet architecture in between is limiting. This is similar to what many Gigabit Internet customers see today, where they may only see 50 megabytes per second from a content delivery network, versus the 100 megabytes per second that their entire internet connection can carry.

So, in addition to relatively limited locations where 5G mmWave signals can be accessed, users can also expect that many services will not fully utilize the speeds that it promises for some time.

While 5G may be the future, it's not a service you should be banking on taking full advantage of anytime soon. Rather, it's a service that will be rolled out gradually and in certain places -- which may not be where you live.