AppleInsider
Posted: November 18, 2020 10:25PM
in General Discussion edited November 2020
The USB-C power cable on the new HomePod mini is not removable despite initial speculation that it could be, a home teardown of the device revealed. 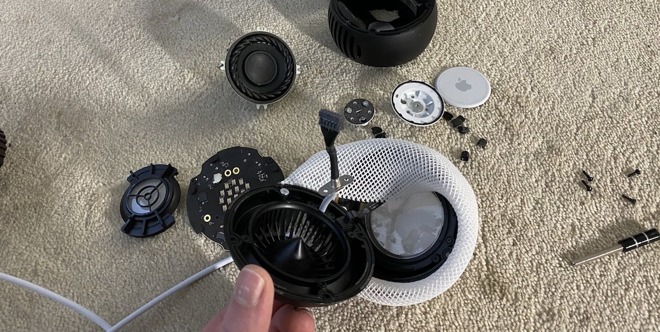 Although technically not meant to be removed, the power cable on the original HomePod could be detached and reattached with a bit of force. That's not the case on the device's smaller counterpart.

On Tuesday, MacRumors forum member ouimetnick published a home teardown of the new HomePod mini, which contained the tidbit about its power cable.

"The power cord is NOT replaceable," ouimetnick wrote in the forum post. "DO NOT pull as it won't come out."

Compared to the previous version, disassembling the HomePod mini is different and requires users to get through the mesh before removing the top piece of the device.

The teardown also shows off the built-in Apple S5 chip, which appears to be on its own "daughter" printed circuit board that is soldered to the primary board. Additionally, the markings on the NAND flash storage aren't readable.

Apple's $99 HomePod mini became available to preorder on Nov. 6, and should be shipping out to initial customers this week.