AppleInsider
Posted: November 24, 2020 5:54PM
in Current Mac Hardware
A YouTuber has improvised a solution to have up to six monitors on a single M1 Mac mini, but most users should probably stick to what the unit supports natively. 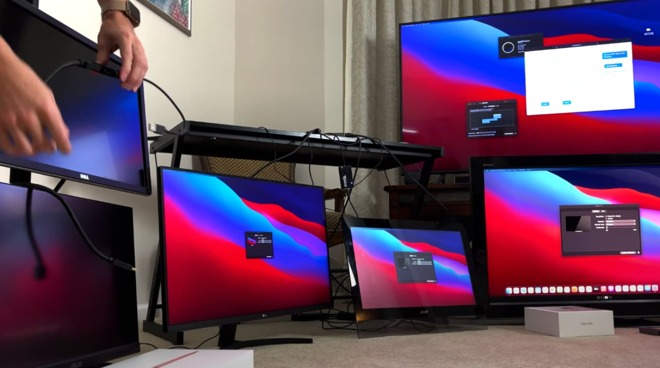 When Apple introduced the new M1-powered Mac mini, MacBook Air, and 13-inch MacBook Pro, it quietly changed the video output limitations, enabling the Mac Mini to drive two monitors, and the MacBooks to handle one external screen alongside the built-in display. Shortly after launch, a YouTube video indicates it's possible to go far beyond Apple's recommendations.

Published on Sunday, the video by Ruslan Tulupov shows the M1 Mac mini working with more than the two-screen limit. Following an initial video showing it was possible to drive three screens using one adapter, a second video uses a plethora of adapters to bring the total screen count to six on one Mac mini. 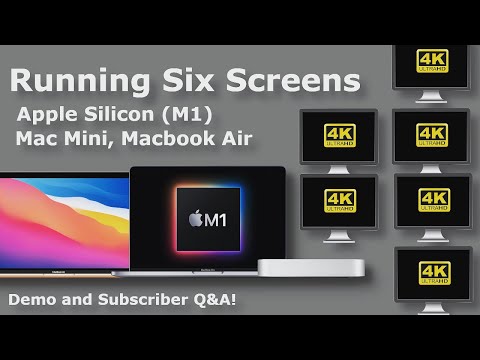 To accomplish the feat, Tulupov works around Apple's limitation that allows for the HDMI port to drive one screen and Thunderbolt 3 to drive a second. While a screen is connected to HDMI as usual, the video then uses a Thunderbolt 3 dock as a main base for all of the other video connections.

A Thunderbolt-to-HDMI adapter is used to connect one screen to the dock, while other displays are connected using a variety of DisplayLink adapters. Using the Big Sur-compatible DisplayLink drivers and software, the extra adapters were able to provide a video feed to each of the screens.

Creating such a setup is an expensive project, with each DisplayLink adapter costing between $75 and $100 each, before you factor in a suitable Thunderbolt dock, let alone the displays. You could end up paying out the equivalent of an entry-level M1 Mac mini on top of the Mac mini itself, and it appears that the retail value of Tulupov's setup is around $950, not including monitors, exceeding the cost of a second Mac mini.

Additionally, each display under DisplayLink consumes CPU and GPU resources to function, as opposed to just the GPU for the native displays. You are not going to be able to render six 4K-resolution screens and have it still running consistently speedy under load, at a consistent frame rate, or to play video well.

Further complicating a similar installation, DisplayLink drivers have been unusable at times in macOS over the last five years. For example, macOS 10.13.4's release broke DisplayLink and other similar systems until support was reintroduced to make the adapters functional again months later. Other breakages induced by macOS updates have been fixed by the driver manufacturer itself -- but they are not day and date fixes.