AppleInsider
Posted: December 21, 2020 11:09PM
in General Discussion edited December 2020
Epic Games and Samsung are teaming up on a guerilla marketing campaign that seeks to publicize the developer's legal battle with Apple over App Store policies and restrictions. 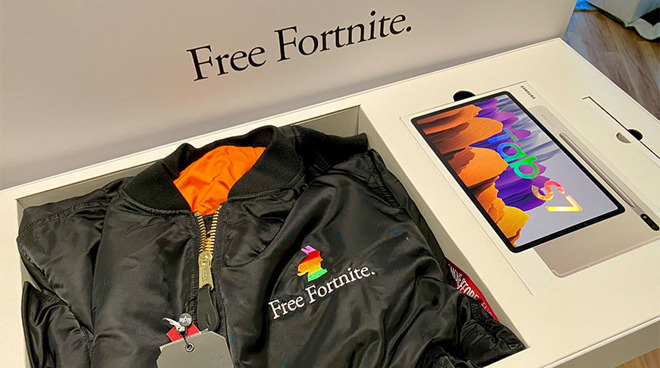 Packaged in an Apple-style box complete with llama logo, the gift contains a small insert with stickers and an informational card.

Fortnite was named the Samsung Galaxy Store Game of the Year for 2020. In celebration, we've teamed up with Samsung to send you a special box of #FreeFortnite gear.

While Fortnite may not currently be available on the App Store or Google Play, you can still get the latest Fornite updates directly from the Epic Games app on the Galaxy Store. Spread the word, #FreeFortnite.

Care packages were sent to IGN host Greg Miller, Fortnite streamer SSN Santa, Fortnite Mobile standout MistyGod, content creator Ducky the Gamer and others. Ducky the Gamer on Sunday posted to his YouTube channel an unboxing of the swag bag that has since notched nearly 74,000 views.

Epic in its legal filings claim Apple's App Store fees and policies are anticompetitive. The company also wants Apple to change its rules regarding the restriction of third-party app stores on iOS.

Most recently, Epic in November expanded the scope of its fight with a filing in Australia. In the U.S., the judge overseeing the case this month ordered depositions from Apple CEO Tim Cook and software chief Craig Federighi.
«12»