AppleInsider
Posted: January 30, 2021 3:50AM
in General Discussion edited January 2021
A rare functional example of Apple's first computer, the Apple 1, is up for sale on eBay, with its seller asking a cool $1.5 million for the privilege of owning a piece of tech history. 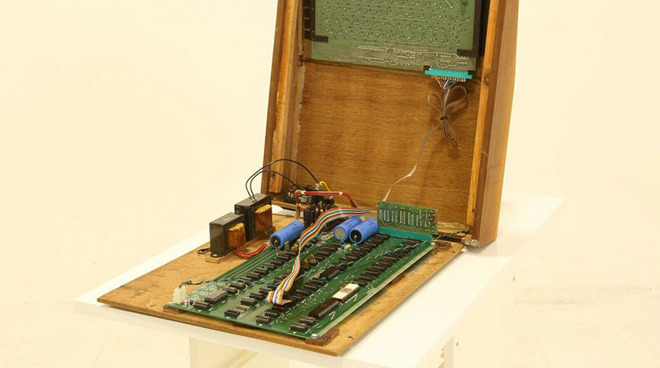 According to the item's description, first spotted by IGN, the model is verified as original by Corey Cohen, an Apple 1 expert whose knowledge is often sought for appraisals at larger auctions.

Known as the "Canadian" on Mike Willegal's Apple-1 registry, the example on eBay is one of six known surviving units to come housed in an original Byte Shop KOA wood case. It comes with an original power supply and Datanetics Version D keyboard, as well as a period-correct Sony TV-115 monitor with video modulator.

The Apple 1 board is unmodified and in "almost perfect" condition, according to the seller. It is also one of few remaining units to be fully operational, a point proved when it ran for over six hours a day while on display at the Vintage Computer Festival West in 2019.

Current owner Krishna B. Blake purchased the Apple 1 in 1978 from its original owner as part of a trade-in deal for a newer Apple II. Blake's computer store in Montreal was responsible for Apple II maintenance prior to Apple's entry into Canada.

Despite its pedigree and current state, the Apple 1 on sale through eBay might not fetch Blake's $1.5 million asking price. Other examples have come close to the $1 million barrier, the closest being a 2014 sale worth $905,000, but more recent auctions have drawn bids below $500,000.

A total of 200 Apple 1 computers were made, each hand-built by company cofounder Steve Wozniak in Steve Jobs' garage in Los Altos, Calif. When the product was first released in 1976, it sold for $666.66 without power supply, display, keyboard or housing.