AppleInsider
Posted: February 19, 2021 1:29PM
in General Discussion edited February 19
Apple CEO Tim Cook sat down for an interview with a student from the Beijing University of Posts and Telecommunications and covered topics from iPhone to innovation. 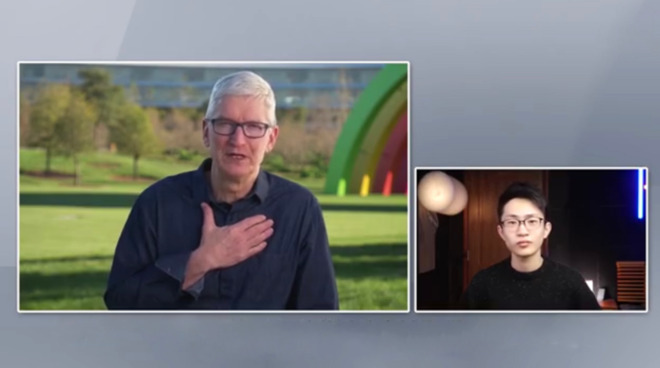 Tim Cook makes public appearances on a regular basis to cover Apple's usual talking points and on Friday morning he talked with a 22-year-old Chinese college senior. The interview covered Tim Cook's morning routine, his visits to China, and how technology affects our lives.

Interviewer and university student He Shijie started by asking Cook how he and the team at Apple deal with the stress of coming up with new products every year.

Shijie commented on the iPhone 12 and congratulated Cook on the new devices and features. Cook responded by commenting on the innovations Apple released throughout 2020.

"We're having an incredible time with it (iPhone 12)," Cook continued. "I really believe that 2020 was our top year of innovation ever," "between the phones and the Watch and the iPad, and M1."

Shijie said the M1 processor in his MacBook Air has long-lasting battery life, "it just lasts forever." He said Final Cut performs much better on the MacBook Air than on his older 16-inch MacBook Pro.

The conversation turned to technology and how it has been implemented to improve lives. Cook discussed some of the innovations that were inspired by China, like alternate keyboard options, night mode photography, and QR code scanning. Cook said that it is important for everyone to learn how to use their device because "everything is on the phone."

Tim Cook said he loves visiting China and meeting developers. "The largest reward we get for our work is seeing what other people do with it," he commented, inviting Shijie to discuss his work process.

Shijie said that the Notes app is one of his most used apps. That having one place to jot down thoughts and having it sync between his iPad and iPhone via iCloud is an amazing tool.

The conversation then turned to Cook discussing his involvement on the SEM Board, educating people on coding, and Everyone Can Code. He says that coding and creativity are important skills for the future.

The interview concluded with a short conversation about Steve Jobs and advice for graduates seeking employment. Cook cited a quote from Jobs in answering the question, saying "you'll know it when you find it. And if you haven't found it yet, you should keep looking."
«12»