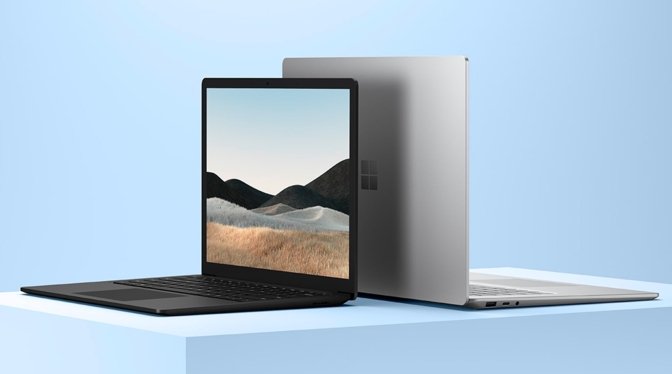 Launched on Tuesday, the new Surface Laptop 4 collection takes off from the Surface Laptop 3, with it providing users a thin and light notebook. One that is also equipped with a touchscreen, a signature element of the Surface lineup.

The new range is split into two tiers, consisting of the 13.5-inch and 15-inch models, with each also offering consumers the choice of Intel or AMD processors. It also appears to be a continued play by Microsoft to take on Apple's MacBook Air and MacBook Pro lineup.

AppleInsider got hold of the Surface Laptop 4 to compare it against Apple's lineup. 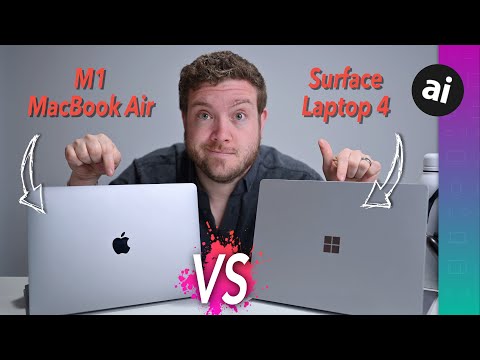 Everyone is familiar with Apple's MacBook Air and Pro lineup's appearance, using a signature aluminum enclosure. Microsoft offers a little more customization to its aluminum chassis, with a choice of materials that go around the keyboard.

Users can choose between the soft-touch "Warm Alcantara," which is said to provide a luxurious feel or a "Cool metal" keyboard. The Alcantara may be nice to touch, but it's likely to wear and become dirty over time, as with other notebooks that use fabric coverings.

For the physical size, Apple's notebooks are identical in-depth and width at 11.97 inches by 8.36 inches. Microsoft's offerings are both larger, with the 13.5-inch models measuring 12.1 inches long and 8.8 inches wide, while the 15-inch version is 13.4 inches by 9.6 inches. 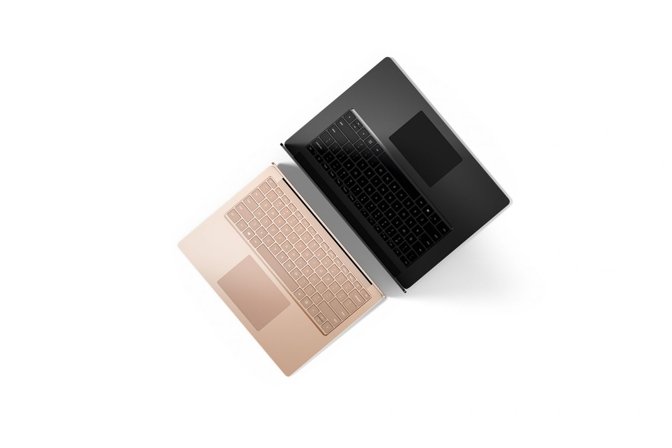 The two Surface Laptop 4 models, back to back.

While physically larger, the Microsoft notebooks are thinner than Apple's at 0.57 inches and 0.58 inches depending on size, versus the 0.61 of the MacBook Pro and the tapered 0.16 to 0.63 inches of the MacBook Air.

The weight is roughly evenly matched for the smaller models, with the 13.5-inch Surface weighing the same 2.8 pounds as the MacBook Air, and is slightly lighter than the 3-pound MacBook Pro. The 15-inch Surface tips the scales at 3.4 pounds. 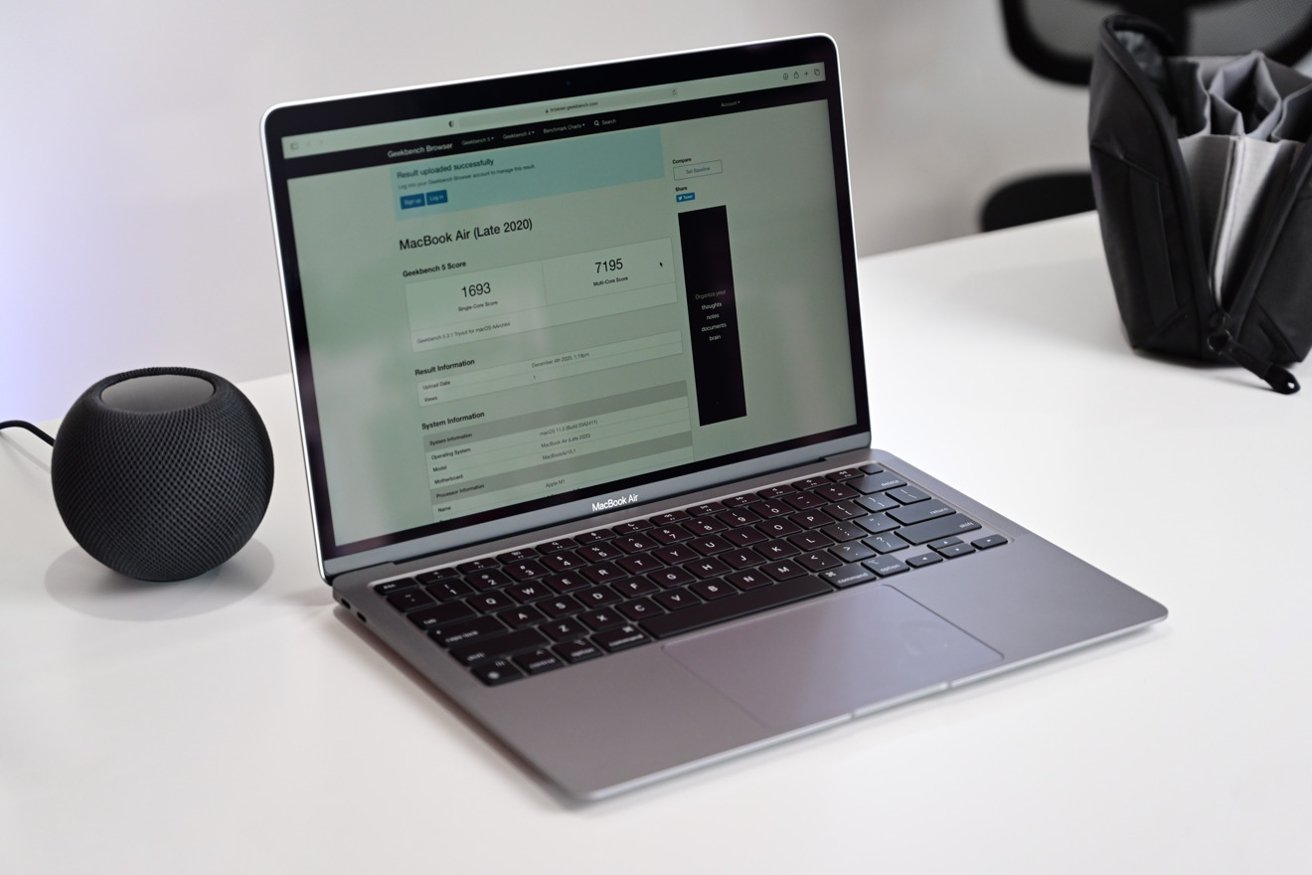 The MacBook Air is still a thin-and-light workhorse, but now benefits from M1's performance.

One of the reasons the 13.5-inch Surface Laptop is much larger than the MacBook is Microsoft's use of the 3:2 aspect ratio PixelSense Display, which is narrower than Apple's 16:10 screen.

Not only is the screen unusual in its dimensions, but it's also at a lower pixel density than Apple's, with both managing 201 pixels per inch against 227ppi. It's not really a dealbreaker when you put them side by side, though. 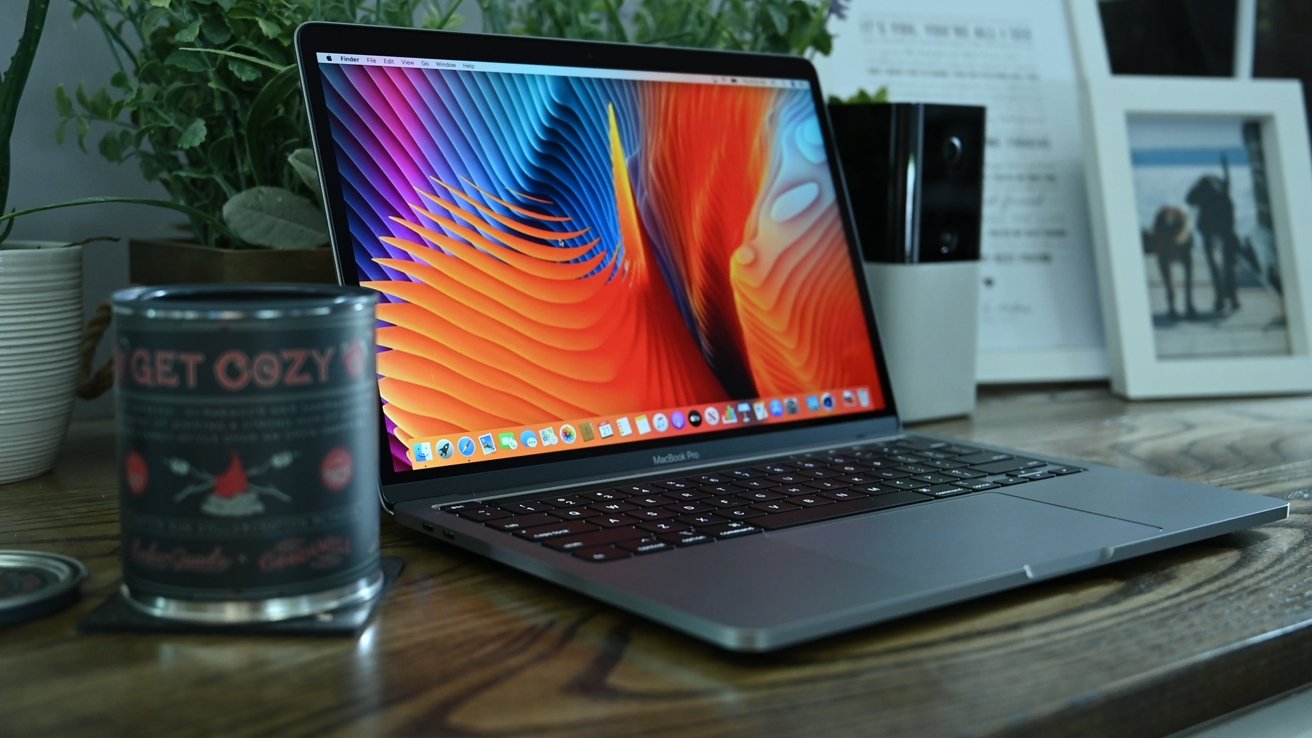 You have a higher pixel density on the MacBook Pro, but not the Surface Laptop 4's touchscreen.

Where Microsoft takes the lead is in its continued offering of a touchscreen. The ten-point multitouch and Surface Pen support is something the MacBook range doesn't have, though people who use an iPad Pro as their daily driver may have something to say about that.

A key element to be concerned about in Microsoft's releases is its choice of processors and how they fare against Apple's versions. The news isn't great for Microsoft.

In each case, the Intel models use Intel Iris Xe graphics, while the AMD chips have "Microsoft Surface Edition" Radeon Graphics, in 6-core and 8-core variants depending on the size. 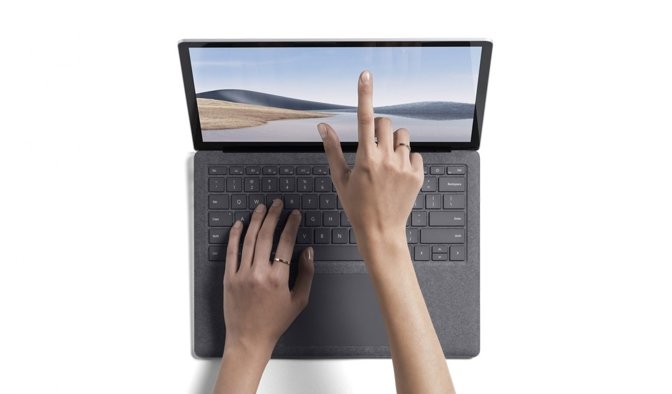 The Surface Laptop 4's screen has a 3:2 aspect ratio and touch support.

Microsoft's problem is that, in benchmarks, these aren't really great competition for Apple's M1.

In Geekbench tests at the time of its review, the M1 MacBook Air managed 1,693 points on single-core tests, rising to 7,195 on multicore tests. On graphics, the Compute benchmark running Metal achieved a staggering 20,284 points, while listings for the M1 under OpenCL identify it as scoring 18,282 points.

Benchmarks for the AMD processors weren't available at launch time because they're exclusive to the Surface line, but AppleInsider has since run its own tests on an AMD Surface with 8GB of memory.

In single-core tests, it could only manage a lowly 546 points, less than a third of the M1 MacBook Air, while the multi-core test managed to reach half of the MacBook Air's score, achieving just 3,165. 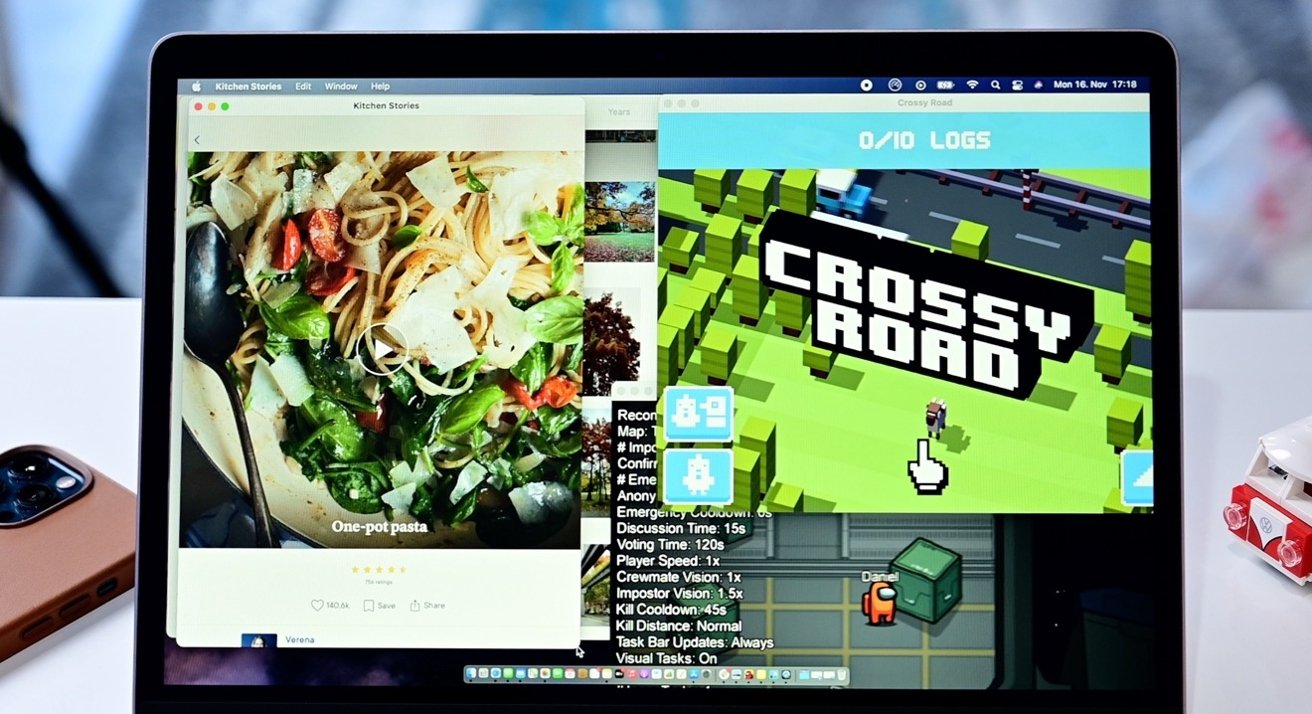 The M1 is not only the high-performance option, but it can also run iOS and iPadOS apps.

There are certainly some Ryzen chips on the market that could keep up or outpace Apple's M1, but we're talking newer 5000-series Ryzen chips at the high-end for single-core and Threadripper processors for multi-core. Instead, Microsoft went for a custom solution that used chips from a previous generation as its base.

On the GPU side, Intel Iris Xe Graphics pulls in 14,444 in OpenCL tests. On our OpenCL tests of the AMD-equipped Surface, and the MacBook Air for this article, the Surface managed 6,976, while the Air got an even higher 18,649.

For the Cinebench test, the MacBook Air managed 1,516 for its single-core test, while the AMD surface failed to compete again with 456. The same disparity was seen on the multicore test, with the Surface managing just 4,260 to the Air's 7,259.

A video export test using Handbrake and a 10-minute 4K-resolution video exported at the highest resolution possible took 26 minutes and 19 seconds on the MacBook Air, though it could be improved further by being run natively rather than through Rosetta 2. The AMD-based Surface did a better job and closed the gap, but was still behind with a duration of over 29 minutes.

The supporting Memory is slightly better on the Surface, with Microsoft offering options for between 8GB and 32GB of RAM on its Intel models, but then either 8GB or 16GB for the AMD versions. Meanwhile, Apple offers 8GB at a minimum, or 16GB as an upgrade.

One area Microsoft typically fares better with is connectivity. While Apple has minimized the number of ports available to users over the last few years of MacBook releases, Microsoft keeps providing as many options as possible, in a similar way to other PC vendors.

For the Surface Laptop 4, this isn't the case. Microsoft offers one USB-C 3.1 Gen 2 port, one USB-A, a headphone jack, and a Surface Connect port. Meanwhile, Apple offers two USB 4 ports that can also be used for Thunderbolt 3 connectivity and a headphone jack. 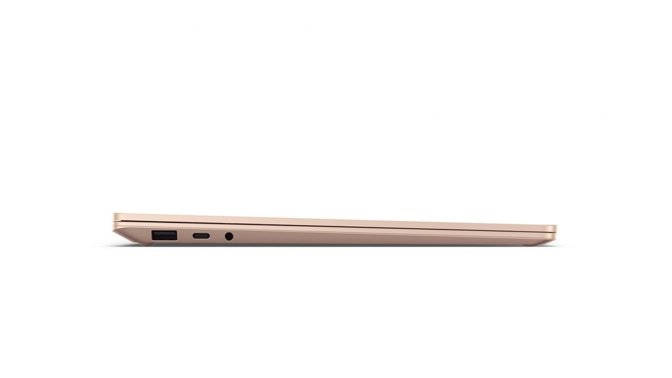 This would seem like a draw but bear in mind that the MacBook connections offer up to 40Gbps of bandwidth, while the Surface Laptop 4 can only manage up to 5 Gbps on the USB-A connection and 10Gbps on that USB-C connection.

That backwards compatibility with USB-A is certainly a benefit for the Surface, but we want to see more use of USB-C ports, as the industry is moving towards that connection. The benefit of one over the other here depends on your current needs, and where you think you'll be in the future connectivity-wise. 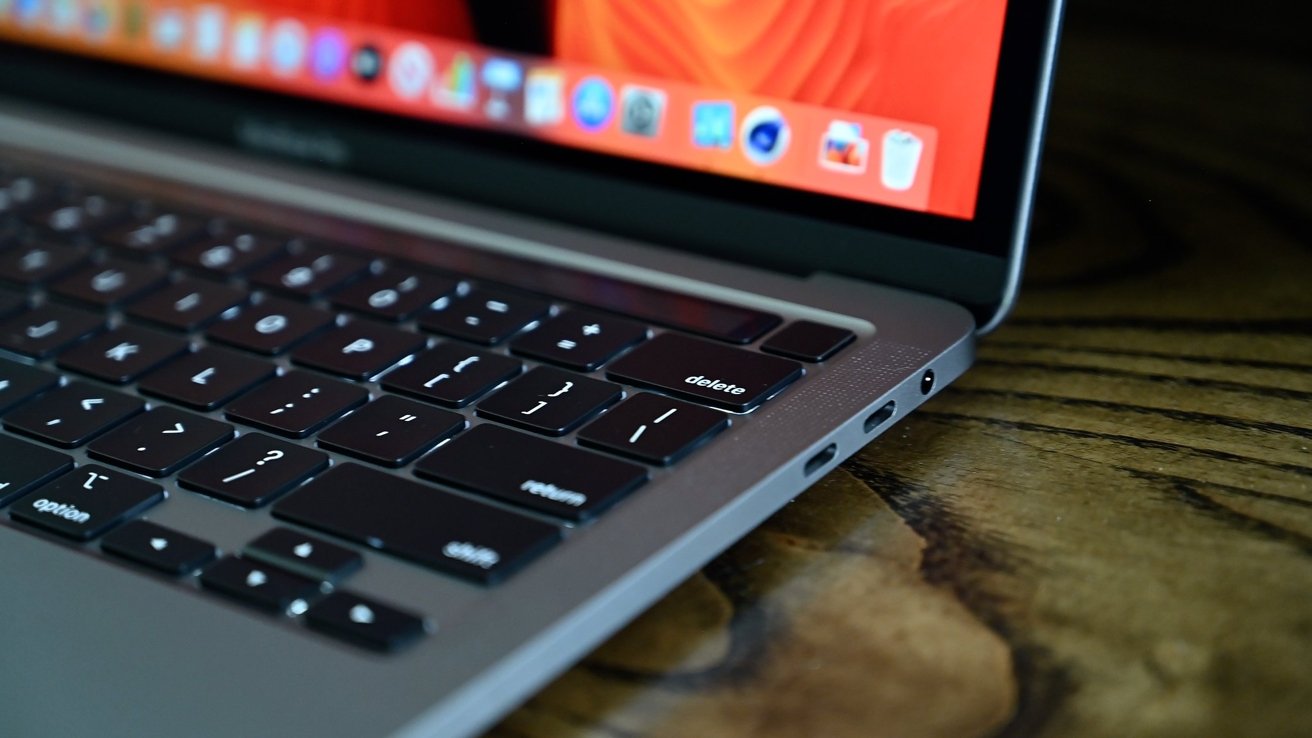 It's USB-C all the way on the MacBooks.

You may not need a dongle for the Surface, but you'll lose that extra USB-C connection.

All models offer wireless networking at 802.11ax, along with Bluetooth 5.0.

MacBook Air and MacBook Pro versus Surface Laptop 4 - Other Features

Both product lines offer biometric security, with Microsoft opting for Windows Hello sign-in, whereas Apple uses Touch ID. The inclusion of Windows Hello does ask the question of whether Apple will include some form of Face ID in a MacBook in the future, as it's certainly handy for logging in effortlessly.

The presence of both biometric systems on their respective platforms at least means there's a relatively simple and secure password-less authentication system in play.

All models use 720p webcams.

Battery life varies across the board, but not by much. The MacBook Air can last for up to 15 hours, while the MacBook Pro manages 17 hours.

On the Surface, the 13.5-inch model can last for either 17 or 19 hours, depending on the processor, or 17.5 hours or 16.5 hours on the 15-inch model. This eekes out the MacBook lineup, but not by that much realistically.

On Microsoft's side, it's not quite so straightforward. For a start, there are six configurations available for the 13.5-inch model and five for the 15-inch. 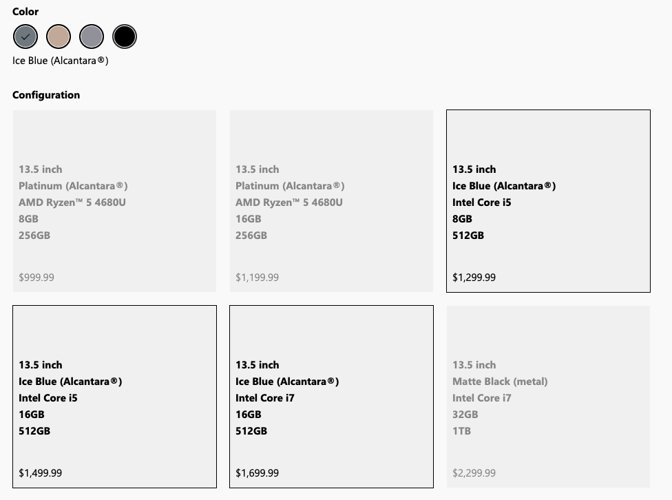 Microsoft has oddly limited how users can configure the Surface Laptop 4.

While it could be suggested that the pricing is in the ballpark of Apple in general, it is hard to say that the way Microsoft is offering the Surface Laptop 4 is anything but limited.

Apple offers a far simpler way to choose and pay for what you want. Meanwhile, Microsoft forces customers to choose from a selection of options that it has decided upon, without any further way to customize the order.

Still in the shadow of Apple

Looking at what Microsoft presented on Tuesday, the Surface Laptop 4 is certainly an adequate Windows notebook from the Windows developer for anyone who wants one. It has its quirks, such as the display and the port options, but it will probably serve anyone who wants to use Windows perfectly fine.

Microsoft's problems start when you compare it against Apple's M1-based notebooks. Apple's offerings are smaller, offer a higher display resolution, and crucially provide more performance through the use of Apple Silicon. Apple's offering is minus the use of Windows 10, of course -- at least for now.

While Microsoft may have tried to give consumers something different in its custom AMD processor choices, basing them on the previous generation isn't going to help the Surface Laptop 4's case against even the MacBook Air.

That's before you get to the problem of trying to select the best Surface Laptop 4 for your needs from Microsoft's oddly-structured configurations list.

As a Windows machine, the Surface held up well in the video export test and did a decent job overall, if you were to compare it against other Windows notebooks. The higher number of options and the relatively comparable pricing with the Mac helps the Surface's case, but the performance of Apple Silicon simply blows it away.

It may be an attractive proposition for some, but on paper, at least, it's hard to recommend the Surface Laptop 4 instead of a MacBook Air or 13-inch MacBook Pro. The 15-inch Surface models may look better for having a larger screen, but with the prospect of a larger Apple Silicon MacBook on the way, even that isn't a safe advantage for Microsoft here.