AppleInsider
Posted: May 22, 2021 8:19PM
in Apple Watch edited May 22
While the Apple Watch is a premium wearable device, the Aurum-Edition hand-engraved 24-karat gold Apple Watch turns it into an even more valuable and high-end timepiece. 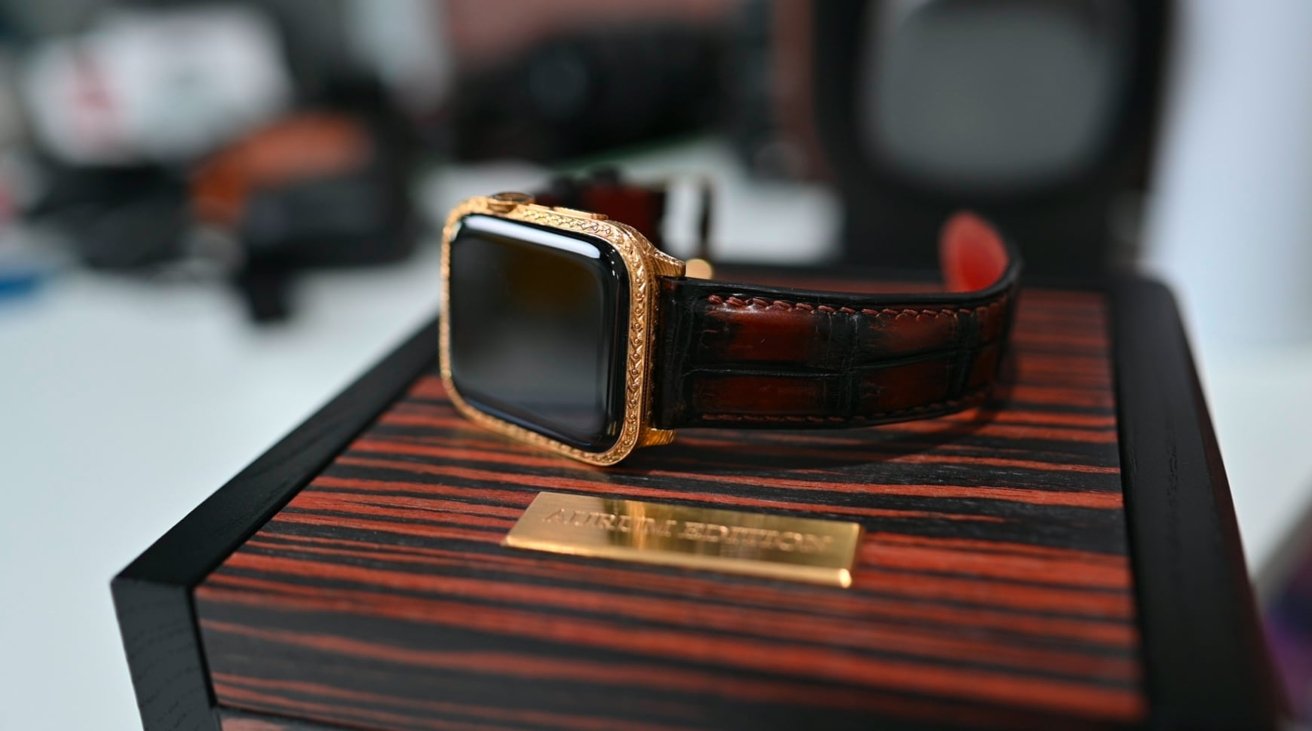 Apple no longer sells the Apple Watch Edition, with well-heeled consumers wanting a premium version having to go down the route of the Hermes variants. You can also get an Apple Watch Series 6 in "Gold," but that refers to the color of the stainless steel case.

If you want to have an actual Apple Watch made of gold, you're going to have to look elsewhere. 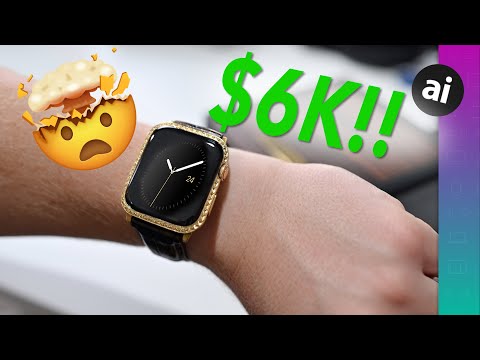 Aurum-Edition is a company that leverages its jewelry design and production experience to create premium versions of devices and gadgets, as well as bags and accessories. Naturally, this includes the iPhone 12 Pro, but also the Apple Watch Series 6.

The firm sent AppleInsider one of its $6,000 24-karat models for inspection, a watch made from solid gold. The body of the watch was cast entirely in gold, which was then painstakingly engraved by hand with an intricate pattern.

The details extend not only around the bezel of the face and the sides, but also to the Digital Crown and the side button, which have their own fine patterns. 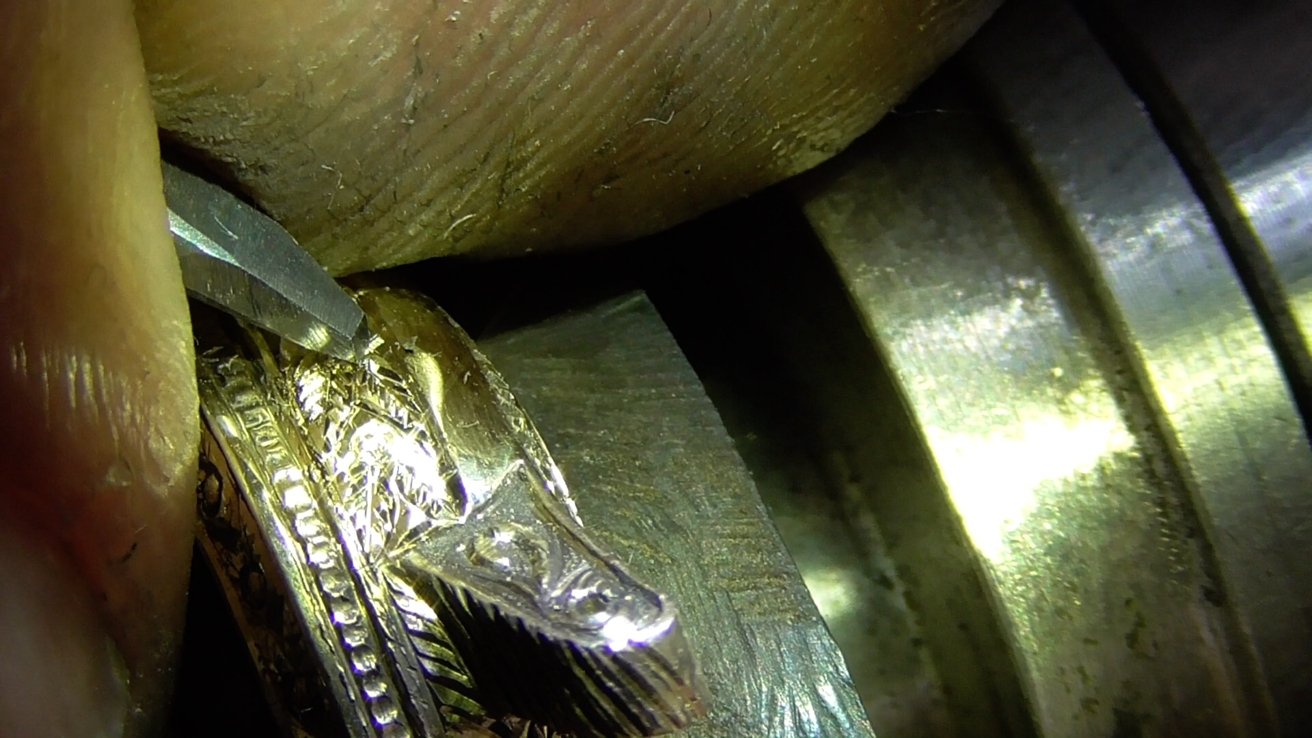 All of the engraving on this gold Apple Watch is done by hand.

For a special device like this, it's naturally a little larger than the typical Apple Watch, due to the considerably expanded bezel. The increased size probably won't be an issue for a potential wearer, as they may want it to be more noticeable as a status symbol.

The premium experience is also in its unboxing, as Aurum-Edition uses a wooden box to present the Apple Watch to its wearer, with the device itself positioned on a cushion. Once you remove the techno-jewelry, you can delve deeper into the box to acquire the charging puck. 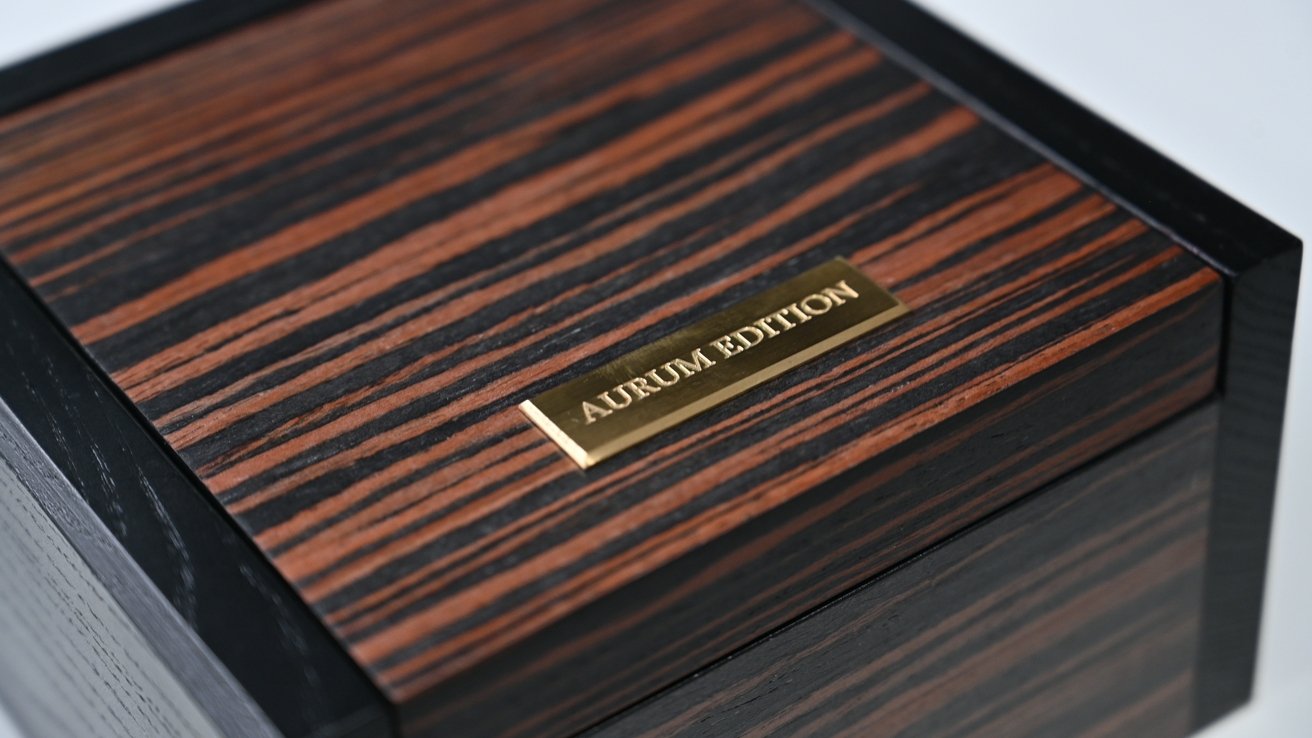 Aurum-Edition made the unboxing experience comparable to traditional high-end watches.

Aurum-Edition's move to effectively transplant an Apple Watch from the original enclosure into a solid gold version does introduce some changes to how the Apple Watch functions. There are certainly a few things to bear in mind when using it, but for the most part, it's a typical Apple Watch in normal usage.

For a start, you can't use your existing collection of Apple Watch bands with it, as there are no slots to slide them into. Instead, there are the standard pogo pin-based mounts that normal watches use. 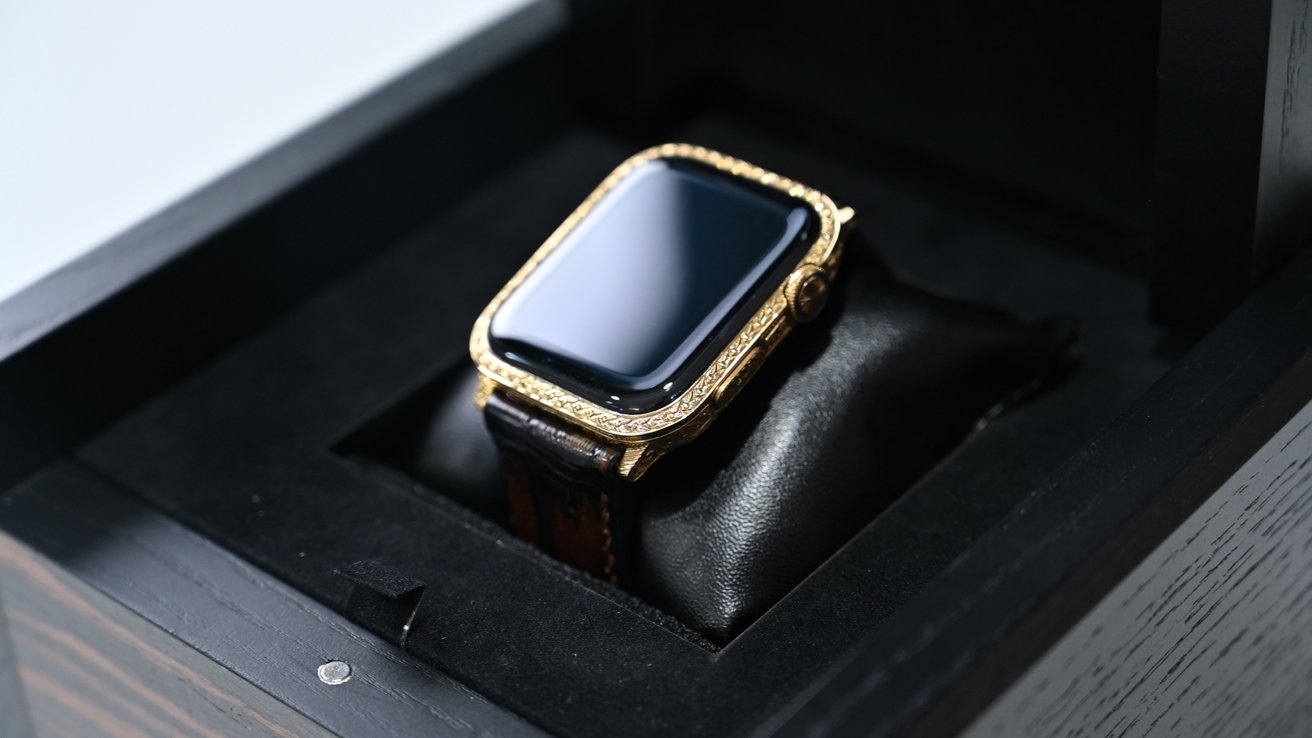 You can't add your Apple Watch Sport Band to this timepiece.

The watch is also supplied with a brown crocodile leather strap, complete with a clasp that matches the Apple Watch engravings, which adds to the premium feel of the timepiece.

Of course, switching the enclosure and replacing the Digital Crown with a gold version also rules out the ability to use the ECG function of the Apple Watch. The main sensor system in the base works just fine, but you cannot use it to take an impromptu ECG. 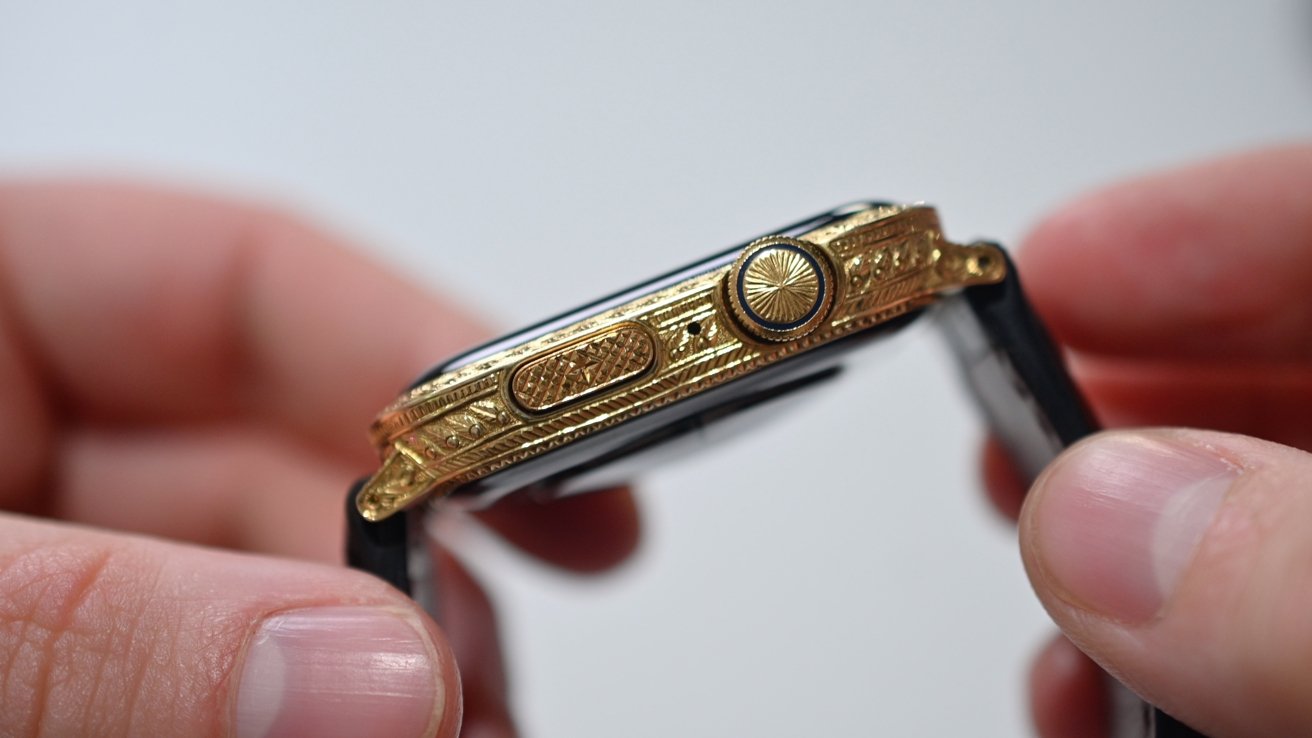 The engraving is exquisite, but it does mean you can't use the ECG function.

Though it does mean this version of the Apple Watch actually does a little less than a regular-priced one, that's not the point of this $6,000 Apple Watch. Nor is it the point of the other models, which include diamonds, sapphires, and yes, one with a Hermes strap. 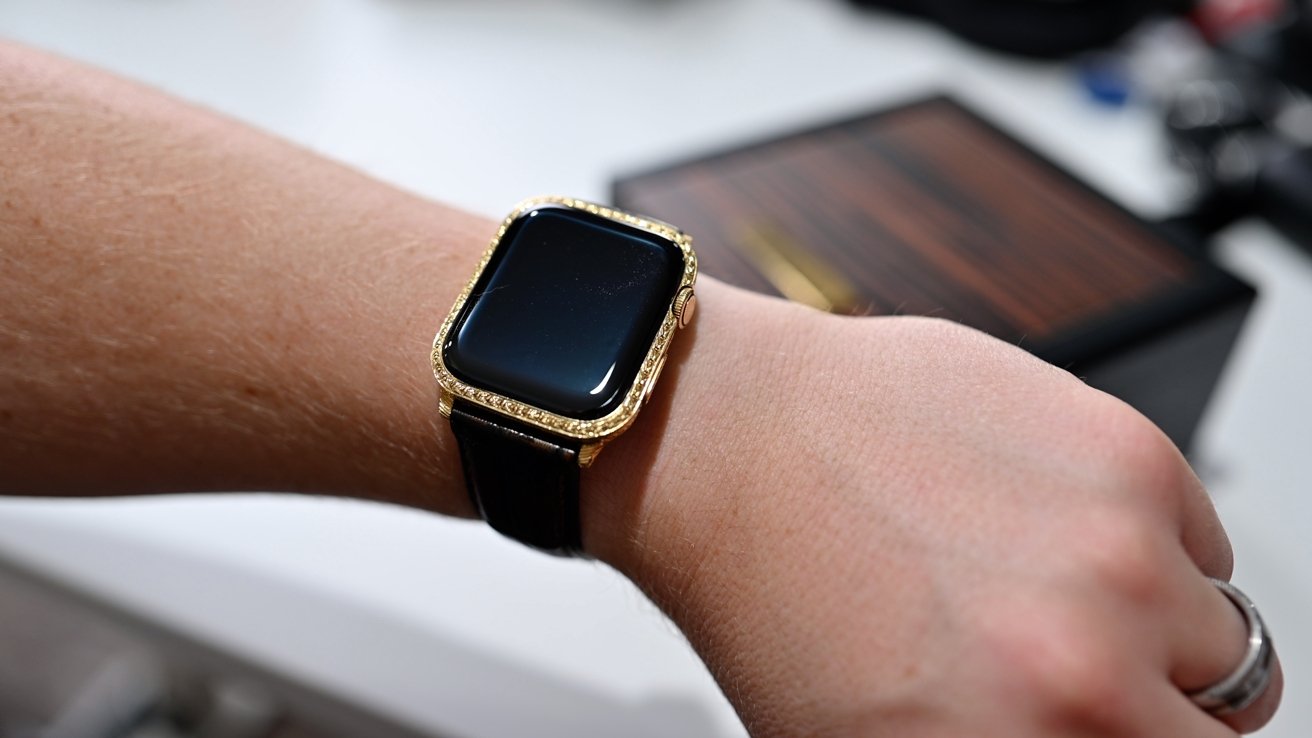 This gold-encased Apple Watch is a not-so-subtle hint to others of your wealth.

This is not meant as a practical Apple Watch for the average user. The Aurum-Edition Apple Watch is thoroughly a status symbol, an item designed to show your wealth. If you can comfortably afford it.

If Hermes variants of the Apple Watch subtly hints to people that you're wealthy, the Aurum-Edition Apple Watch Series 6 positively screams it.