AppleInsider
Posted: August 16, 2021 2:30PM
in Mac Software edited August 2021
The forthcoming 1Password 8 for Mac is now in beta, but instead of a regular Mac app, it uses the resource-intensive Electron system -- and users are objecting. 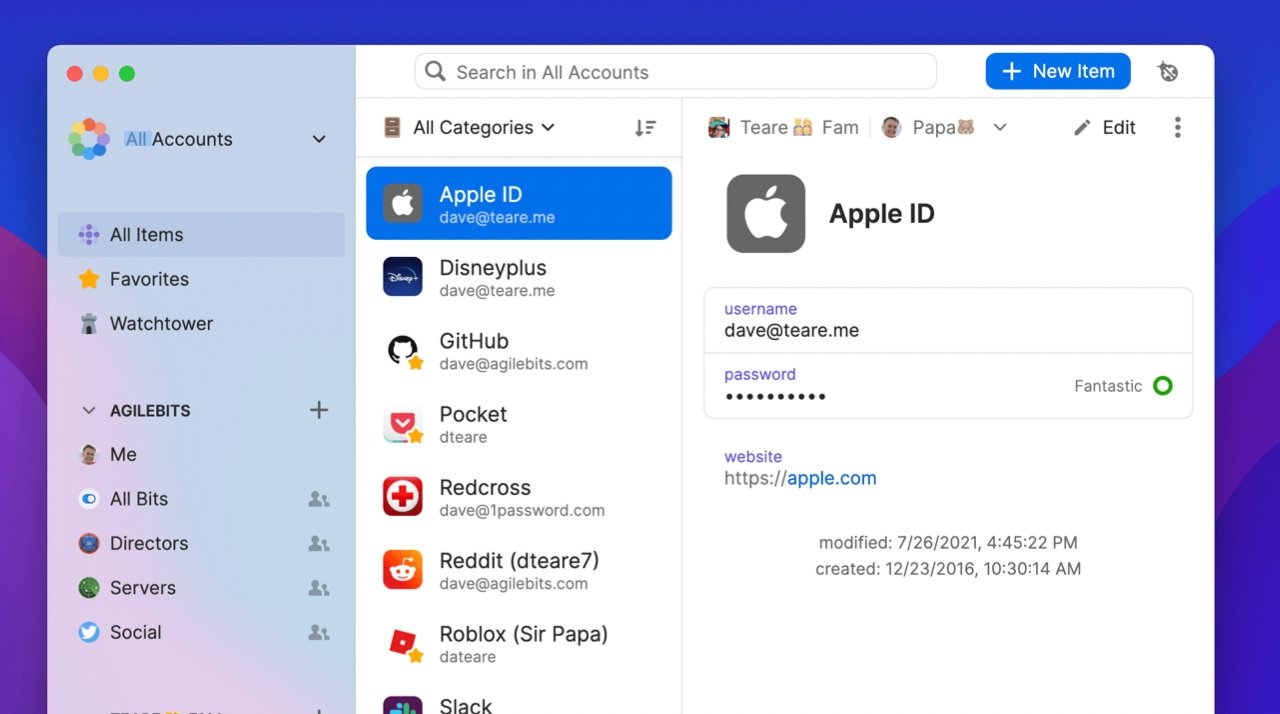 1Password 8 for Mac promises improvements, but will be based on the unpopular Electron platform

Agilebits, the developer behind password management app 1Password, has decided to move its macOS app to Electron. It's part of a plan to make the forthcoming 1Password 8 use the same codebase across all platforms, meaning all features are on every device. But it has caused consternation among Mac users.

"The decision of how to build 1Password 8 for macOS was probably the most complicated one we had to make," wrote 1Password's Michael Fey in a blog post.

"Ultimately we decided for a two-prong approach," continued. "We would build two Mac apps. One written in SwiftUI that targeted the latest operating systems and another using web UI that allowed us to cover older OSes."

Given that an aim was to reduce the number of different versions of 1Password that the company had to maintain, though, doing two Mac ones proved untenable.

"Despite the fact that SwiftUI allowed us to share more code than ever between iOS and macOS," said Fey, "we still found ourselves building separate implementations of certain components and sometimes whole features to have them feel at home on their target OS."

"Ultimately we made the painful decision to stop work on the SwiftUI Mac app and focus our SwiftUI efforts on iOS, allowing the Electron app to cover all of our supported Mac operating systems," he said.

It's possible that Apple's SwiftUI was not yet able to provide all that 1Password needs. However, in abandoning that for Electron, AgileBits is using a platform that is notably resource-heavy and generally less reliable.

The Electron platform made it easy for other apps such as Slack and Discord to have a Mac presence, but performance and stability are typically poorer.

Consequently, 1Password 8 users are objecting to the use of Electron and asking the company to reconsider. In a Reddit AMA with the development team, the issue was raised but reportedly not answered.

"I understand the 1P8 is better on the other platforms," wrote a Reddit user named "Cosste." "But the mac has always been the mac and deserves its own native client. Be it an AppKit app or a Catalyst app made from the iPad version."

"As you can already see, many of us are seriously p***** by the move to Electron, the degrading of the current experience, the new memory usage, the usability problems and the non native feeling," continued the user. "And no, we don't want you to make a better Electron app, we want you to continue to build on the native app."

Other users have complained about the company being "dismissive of the current problems." Users claiming to be on the 1Password 8 beta report that it is slower and less responsive.

It is a beta release, however, and generally final shipping versions are faster. Fey describes all of the 1Password 8 versions as an "incredibly strong foundation" for the next decade of the app.

"We remain committed to creating top tier user experiences on all of our platforms," he concluded.