AppleInsider
Posted: October 24, 2021 5:35PM
in iPad edited October 2021
While graphics tablets are the standard tool of the trade for digital artists, the Apple Pencil and iPad Pro could be considered an all-in-one package that combines the peripheral and a computer into one easily carriable device. Here's one artist's opinion on Apple's stylus and tablet, and how it could impact their workflow.

I work as a full-time cartoonist, illustrator, and cartographer in the tabletop gaming industry. I am fortunate to have a large fanbase and a rogue's gallery of clients who keep me busy working in my home office, and in the days before the pandemic, I maintained a healthy travel schedule for conventions and appearances.

Back then, in the "before times," it was fun to pack up and hop onto a plane for a long weekend -- or longer for an event like GenCon. But for years, I wrestled with the crushing anxiety of leaving my work behind.

Sure, taking along a laptop or tablet for emails, calendars, and written work was easy enough. Taking along a mobile workstation for digital illustration was a bit more of a chore than holding a video call in a hotel lobby.

Add in the stress from potentially damaging expensive equipment when on the go, and the prospect never made me feel at ease.

In years past, we have seen the arrival of hardware from various manufacturers attempting to produce all-in-one options for digital illustrators on the go. While some came close, their high price tags and fragility did not make them an industry standard, so the search continued.

In a move that should surprise no one, Apple ultimately delivered an alternative that answered the problem while going above and beyond: the Apple Pencil.

For the purposes of this hands-on piece, I used a 2018 11-inch iPad Pro and a second-generation Apple Pencil. Photoshop for iPad was used as my primary testing software, given that I already have the license for it. 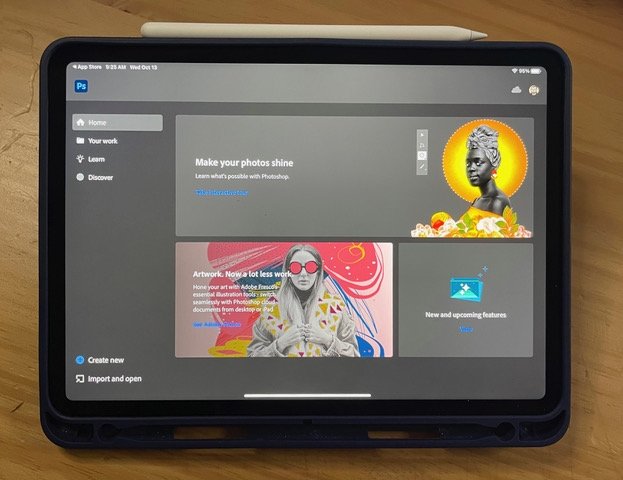 Photoshop exists in tablet form on the iPad and iPad Pro.

I am not exaggerating when I say that it took literal minutes. I expected the process to be more of an ordeal, honestly, and I was stunned by how quickly it was all set up and ready to work. If you wade into this process with a brand-new iPad, there would be a little bit of extra time needed to set your accounts, emails, and preferences, of course.

With the iPad set up, I opened the Apple Pencil and prepared to go for my bronze medal in the pairing Olympics that some peripherals require, only to discover that all I need do was place the magnetic Pencil into the groove along the side of the iPad and the paring process was automatic.

That was it. It took longer to open the box. Hello, silver medal podium.

From there, I downloaded Photoshop from the App Store, signed in with my Adobe information, and I was swiftly greeted by a welcome screen. Again, it was mere moments.

The only thing that could slow this process down is a forgotten or misplaced password for the App Store or Adobe accounts, or the need to set up a new Adobe account.

I am driving this point about speed home because, in the moment of deciding to wade into the process, you'll be ready in moments. Even if you're sitting in that meeting when the client would like to see a "quick change," or waiting for that delayed plane to board.

That matters, and that time you save stacks up.

The Apple Pencil feels and behaves like most stylus offerings associated with digital tablets.

The second-generation Apple Pencil loses the metal band and cap from the first-generation model.

The Pencil is lightweight and durable, unless you are the type of person who gets buck wild when drawing, with a flat edge for easier grip and gesture response features.

The battery life of the second-generation Pencil, working for the time I used it in my environment, lasted for hours. With every break, I would place the Pencil back on the iPad for charging, just in case, but I had no issues with battery life not meeting work expectations.

Honestly, my only quibbles with the Pencil are matters of personal preference.

The standard nib on the Apple Pencil is very, very smooth with no resistance on the iPad surface. With my Wacom stylus, I utilize the nibs that mimic the friction of Pencil on paper. I like that little bit of resistance, and I missed it here.

In my research during the review, I learned that such nibs exist for the Apple Pencil. There are also screen overlays to make the iPad feel more like a sheet of paper. I'll be testing them soon, and I will talk about them here.

My second issue is with the gesture response features on the Pencil. As with the Wacom stylus, I disable that feature, as I tend to rotate the stylus in my hand while I work, and I tire of the unwanted actions.

Again, it is a personal preference, and I am glad the Apple Pencil offers gesture controls for those who enjoy using them.

With Photoshop open and a blank document, I started with the intent of laying out a sketch for a new map I am working on soon. My only purpose here was to learn the UI and lay out a clean sketch to build on later.

This app and hardware can do so much more, but this environment is new to me, so I set my goal low with room to grow. 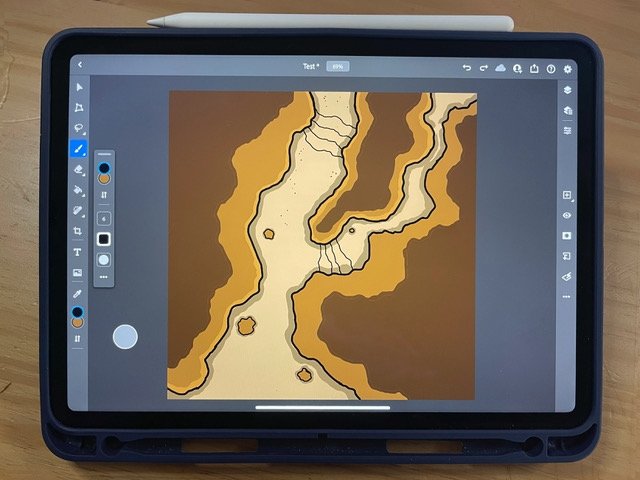 An illustration in progress on the iPad Pro.

I use Photoshop more than any other on a day-to-day basis, and I hoped that I would have the most familiarity and comfort with the transition into a new workspace. I did, but a learning curve still presented itself, and while this is not a full review of Photoshop for iPad or Adobe's other mobile products, I will offer a few thoughts on my Photoshop-on-iPad experience.

After an hour, I had my clean sketch, and I was happy with the results and overall experience. I have created other pieces with this configuration and each time I sit down with it, everything is a little smoother and more refined, with fewer growing pains.

Photoshop is great for this (and other design forms), but it is not the only option. With a wide range of illustration software on the market for iPads and the Apple Pencil, I recommend you do your own research to find the perfect app to meet your needs. A few of the industry standards include:

I enjoy the freedom the iPad and Apple Pencil gives me. I can sit on my patio on nice days and sketch with no issues or take the show on the road when travel and conventions return.

This was the goal for me anyway: To have a great way to enter meetings or attend conventions without an entire Pelican case of equipment to set up. I have that now.

I will not replace my Intel Mac Mini and Wacom Cintiq just yet. I can tell you that I know other professional artists who have made the jump with larger iPads, Apple Pencils, and their software of choice, and never looked back.

It is possible to create amazing, professional-quality art with this configuration. It is happening in the industry right now, and based on what I have experienced here, it will only get better.

When the 2018 iPad Pro shipped, it didn't have some of Apple's newer inventions. Since them, Apple released Sidecar for using the iPad for more Mac screen space and drawing with the Apple Pencil on the Mac, and Universal Control is coming at some point in the fall.

Even thinking about that much newer M1 iPad Pro, the software isn't quite as flexible for me on the iPad as it is on the Mac. So, there remains a place for desktop machines and tablets to handle the larger files and complex documents.

If the trend toward beefier iPads in the Pro line continues, and we see iPadOS continue to change, we could see more of a shift in the years to come.

We'll be talking more about the specific tools I use to get the job done, and how my workflow can adapt to the iPad in the coming weeks and months.

Apple's current iPad 11-inch with M1 is currently discounted, with double-digit and even triple-digit savings in effect in the AppleInsider 11-inch iPad Pro Price Guide. The second-generation Apple Pencil is also marked down, with Amazon delivering the lowest price at press time.