AppleInsider
Posted: May 9, 2017 1:05AM
in General Discussion edited May 2017
The promise of Sonos's Wi-Fi speakers is a truly connected home audio system, integrated with devices like iPhones and iPads, as well as online streaming services like Apple Music, Pandora, and Spotify. To test how well the platform works for Apple users, we outfitted an apartment with Sonos's three main speakers -- the Play:1, Play:3, and Play:5 -- as well as some of its home theater equipment, the Playbar and Sub.

Initial setup proved simple overall, if still time-consuming just for the sheer number of speakers involved. We started with the Playbar. Using the Sonos Controller app for iPhone and iPad, we were prompted to connect the speaker to Wi-Fi and create a Sonos account, to which all subsequent gear would be linked. There are ways of making a Sonos setup totally wired, incidentally, since the devices typically have built-in Ethernet ports, but that largely defeats the point. 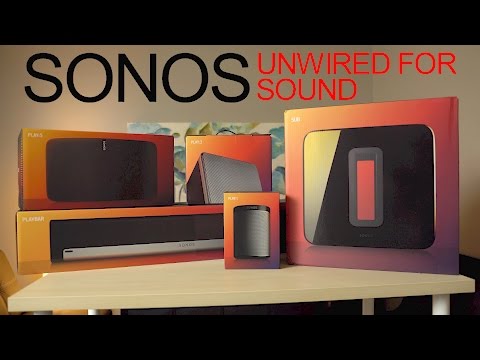 A constant with all of the speakers was something called "Trueplay." This involved tuning each speaker individually by walking around a room with our iPhone, which captured loud pulsing sounds bouncing off of the walls. The final results seemed worth it, though some people might prefer manual tweaking to avoid irritating family and neighbors.

Perhaps the most attractive feature for some people will be the ability to control all of their music from a single app. This includes on-device media, libraries hosted on a connected Mac or PC, and of course, the streaming services we mentioned earlier. Sonos has even implemented many service-specific commands -- with Pandora for example, listeners can vote tracks up or down.

There are some catches. Siri commands can't be used for Apple Music or any other service, and some services have better Sonos interfaces than others -- we found TuneIn in particular to be clumsy, mostly because there's no way to log into an existing account. In that case the only option is to manually search for shows, stations, or podcasts, and then save them for later.

Within these limits, we really enjoyed the flexibility of the platform. It was easy to group and de-group speakers, adjusting their volume separately or in unison. It was also easy to pick different audio sources for different rooms, which would even resume where we left off in some circumstances.

There isn't a huge quality difference between the Play:1, Play:3, and Play:5. Which one(s) to go with is really a matter of space, purpose, and budget.

For many, a $199 Play:1 might be all they need. On its own it's not a stereo speaker, but it sounds good regardless, with solid fidelity and bass. It's also fairly compact, and "humidity resistant," which makes it an option for bathrooms or sheltered patios. People rolling in cash can pair a couple of Play:1s with a Playbar and Sub to build a 5.1-channel home theater setup.

Sonos claims that the 1 "fits in any space," but in practice it may still be a little big on some shelves, and especially on crowded bathroom counters. People with simple needs and little room might be better off looking at Bluetooth speakers like Logitech's UE line.

By design the sweet spot seems to be the Play:3 ($299), which not only upgrades to stereo but may actually be better in tight spaces. While bigger overall, its squat shape is sometimes better for shelving, which is why we placed it in the bedroom. If footprint is an issue the speaker can be tilted on its side, or mounted on a wall or stand -- the Play:1 can only be mounted on a stand.

The Play:5 ($499) is effectively a "deluxe," oversized version of the 3. We placed it between our kitchen and living room spaces, and sure enough, the 5 was able to fill both with high-quality sound, including heavy bass -- even when listening to ambient music. Most people won't need anything so powerful, but this is the one to get for people who want a centerpiece stereo system, especially since it's the only one with an auxiliary input.

We've already reviewed the Playbar on its own, but to recap: it's a powerful nine-speaker soundbar meant for TVs, while still supporting the same streaming options as other Sonos devices. It is $699, but may actually be a better deal in some cases since it can handle all of a person's living room needs in one stroke.

To us the Sub ($699) felt somewhat redundant. It does indeed offer deeper bass, and can be paired with any Sonos speaker. The Play:1/3/5 line typically offers enough bass though, at least in small- to medium-sized rooms.

It makes more sense when paired with the Playbar -- since extra punch is welcome in movies -- but the Playbar also features strong bass, making it hard to justify the cost unless dealing with an especially large room.

Should you go with Sonos?

For a single-speaker setup, we'd say only if a demo unit sounded just that good at the store. A Bluetooth speaker can be just fine, and there are plenty of alternatives supporting Wi-Fi standards like Google Cast and Apple AirPlay -- AirPlay is only an option for Sonos with an Apple TV or AirPort Express, it should be pointed out.

For a house-wide audio system, there really aren't any options that accomplish so much so easily. Sure, it can be relatively cheap to outfit a home with AirPlay or Chromecast Audio, but the Sonos technology makes setup and grouping ridiculously easy, even without the convenience of combining multiple services in a single app.

People building a multi-room system from scratch, then, should at least consider going the Sonos route. The ultimate decision is whether to hitch to a platform that's so dependent on proprietary technology, or go a more agnostic route.

The Sonos Play:1 can be bought at B&H for $199 with free expedited shipping and no sales tax on orders shipped outside NY and NJ, or at Amazon simply with free shipping. The Play:3 is $299 at B&H or Amazon.

The Playbar is $699 at B&H and Amazon. The Sub is available for the same price from both retailers.

Shoppers can also of course buy directly from Sonos, which is luring people with free 2-day shipping with promo code FRE2NDYSHP17 and a 45-day return window.
«12»