Tony Fadell and John Markoff at the Computer History Museum

Fadell initially worked General Magic (alongside Andy Rubin, who developed Android), a mid-1990s Apple spinoff working to build digital assistants. He then joined Apple under Steve Jobs to work on iPod and subsequently served as an inventor of the original iPhone before starting Nest.

After selling the firm to Google for $3.2 billion, he was briefly hailed by the Wall Street Journal as the person to lend "strategic guidance" to Google Glass back in 2015, but then left Google last summer to become an independent project incubator in Paris, France.

Fadell spoke with Markoff--formerly a New York Times reporter and now a historian at the Computer History Museum. The presentation--hosted by the museum on Facebook Live--was one of series of iPhone 360 presentations curated by the museum's Exponential Center.

The first segment of the presentation is embedded below. Subsequent parts are hosted on AppleInsider's YouTube channel. 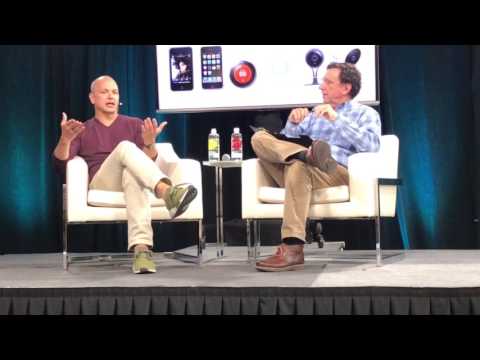 Fadell described growing up in the boom of personal computing of the 1980s--and moving around to "12 schools in 15 years," following his salesman father's work obligations--before landing his first major job designing devices at General Magic. He also outlined decisions made working at Apple, advising the design of the iPod under Jobs.

In between, Fadell described early prototypes that essentially turned a small-screen iPod into a basic phone, followed by an iPhone-like P1 prototype with rudimentary user interface that was never released while work continued on the P2 version that survived.

I read AppleInsider every day!

After the event, Fadell's development team posed for a group picture. We caught up with Fadell to ask some questions and he responded, "I read AppleInsider every day!"

His appearance at the Computer History Museum was also a bit of a reunion (he posed for a group shot with his design team family, below), as Fadell has been living in Paris for the last year. Asked about how Europe compares with Silicon Valley in terms of being able to find talent and build companies, Fadell noted that France is aggressively cultivating tech startups.

Tony Fadell with design team family from Apple and Nest

While most cities would like to have the booming tech industry that currently has its epicenter in San Francisco's backyard, Fadell stated that a major attraction of Paris, in particular, is its proximity to tech-savvy universities and related institutions.

The San Francisco Bay Area's Silicon Vally was greatly advantaged by its proximity to the famed research center of Stanford University as well as the University of California, Berkeley--the birthplace of BSD Unix, the origin of the core OS in iPhones and Macs.

Fadell's view of the global potential for tech startups seems to contrast with the public statements of Apple's chief executive Tim Cook, who has taken to frequently reciting the line that "we know Apple could only exist in the United States."

Of course, in addition to investing in the U.S., Apple is also aggressively expanding around the world, from Israel to Cambridge to Japan to China to India to Taiwan to Canada and France--notably, almost always in locations tied to specialized research universities.

The future of AR & VR

Fadell described the tech scene Paris as undergoing a "Cambrian explosion." In his comments during the presentation, he touched on Augmented Reality and Virtual Reality, outlining a similar view commonly expressed at Apple by Cook, that AR offers a larger opportunity than VR, although both are constrained by the cost of current technology.

Asked about the nature of AR and VR as commonly being associated specifically with visuals, while much of Apple's initial success came from audio--with iTunes, iPods and the iconic white earbuds that placed a virtual, stereophonic sound stage in the listener's head--Fadell noted that immersive audio was clearly a major component to AR projects.

That's reflected in the fact that Apple is essentially working to deliver "audio AR and VR" with AirPods, its wireless headphones that deliver immersive sound without any real physical user interface at all, combined with the fully auditory, voice-based Siri, which works to "augment" the music, podcasts and other existing content users listen to.

Fadell also noted that the tech sector is working globally on a flurry of attempts to deliver things like AR, VR and the related high-computation sensors and systems needed to pilot self-driving cars, as well as health-related devices. Fadell showed off two health monitoring devices he was wearing: a continuous glucose monitor attached to his upper arm, and a black ring on his finger that looked like jewelry but was actually a pulse monitor

In fact, Fadell showed off two health monitoring devices he was wearing: a continuous glucose monitor attached to his upper arm, and a black ring on his finger that looked like jewelry but was actually a pulse monitor.

He created a parallel between so many different product entrants and the state of automobiles in the 1920s, shortly before scores of different aspiring car makers converged down to a few major makers as the industry matured.

Fadell--who experienced, like Jobs, the disappointing reality of failure first-hand, initially at General Magic and later at Nest--noted that a big part of sticking around and achieving success isn't just being first with an idea, but being able to effectively communicate the value of the solution you are delivering to your buyers.

A key example he gave of this was the iPod's marketing line of "1,000 songs in your pocket," which succinctly distilled down the value of paying around $500 for an easy to use, nicely designed, high-capacity music player with fast Firewire syncing in a sea of cheaper alternatives, such as the flash-based Diamond Rio.

iHS and the BS BOS

Apple's Cook has similarly criticized BOS estimates as being very inaccurate, although without detailing how far off they are in actual practice. That hasn't stopped media outlets from waving them around as if they were factual.

Only when an advanced product becomes successful and hits a sustainable volume of sales can it really become very profitable. That's been a key problem for Microsoft and its Zune and Surface, but is also an issue for Amazon's low volume but high mindshare Alexa hardware, Android makers in general, and of course, Google's own hardware efforts to sell Nexus, Pixel and simply resell products like Fadell's once critically-acclaimed home devices developed at Nest.

iPhone 360 upcoming events at the CHM

The Computer History Museum will be hosting a series of other iPhone 360 events this year, including "The Making of the iPhone: Evolution of iPhone Technology" on June 20, a presentation of "The Global Business of the iPhone" in August and "The Social Impact of the iPhone" in October.

The iPhone 360 Project is part of the museum's Exponential Center's 360 series "focused on transformational companies and products that have changed the world through technology innovation, economic value creation and social impact," and "supports the Museum's overall interpretive strategy to explain computing's history and its transformational impact on our world."