AppleInsider
Posted: December 16, 2017 10:50PM
in iPhone
I started out my smartphone experience right at the launch of the very first Android phone, HTC's G1 and stuck to that OS until the last couple years. We've been comparing the Samsung Galaxy Note 8 against the iPhone 8 and iPhone X for over a month now and I think it's time to talk about the real world differences between these two flagship devices.

Both phones have a really premium feel due to the all metal and glass construction but I do prefer the build of the iPhone X. The screen is really nice on the Note 8, with a higher resolution that provides a sharper image and less color shift when viewing at off angles. I also prefer the larger size of the display for multimedia, but the phone is uncomfortable in your hand. The iPhone 8 Plus is similar in the hand but the iPhone X smaller size is perfect for most people.

I was disappointed with the iPhone X's display size at first, since the surface size is actually smaller than the iPhone 8 plus's even though its rated at a larger 5.8 inches. Now that I'm used to the size the Note 8 feels huge in the hand but If you watch a lot of video its larger display provides for a great viewing experience. 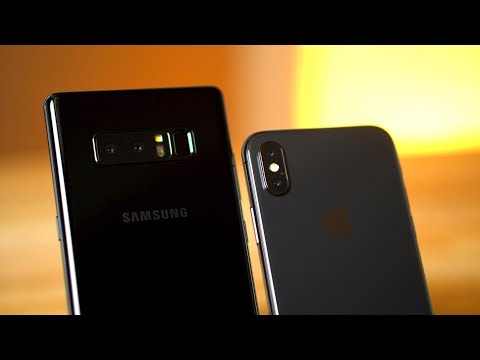 Unfortunately, the speakers on the Note 8 are quite poor. Not only are the iPhone's speakers much louder, but they are of higher quality with more punch on the low end, clearer mids, and crisp highs.

The other big difference is the stereo sound. Apple started using the earpiece speaker along with the bottom loudspeaker in the iPhone 7, and they've perfected and balanced the sound on the iPhone X which provides a massively better audio experience than the note.

Because of this, even though i prefer the much larger screen, without the annoying notch in my videos, i'd choose the iPhone X any day if using the built in speakers. Other than when watching videos, the notch is fine.

We compared speaker quality in a recent video, and you can hear the difference for yourself by clicking the card above.

iPhones have been known for taking the best photos, but in the past couple of years, android phones have really caught up.

We tested both cameras for photo quality, and the Note 8 was just slightly ahead. It seemed to be a bit sharper, the noise reduction was better, and blur effect photos turned out nicer as well.

The iPhone X did a better job with color accuracy and dynamic range, but it wasn't enough.

However, the iPhone X definitely takes the cake on the video side, being able to shoot high resolution video at higher frame rates, with better video quality, especially shooting slow motion video.

I was basically forced to switch over to bluetooth headsets on the iphone and thus don't really have a need for the Note 8's headphone jack its still there because Samsung loves to give you options. When they add a new feature, they rarely take an old one away. Because of that, we have face unlock, iris scanning, and fingerprint scanning.

In the real world, Face ID beats them all since it's really fast, secure, and convenient. Most of the time I don't even notice it's there, almost like going back to the days when no one had passcodes on their phones.

I do like having the fingerprint scanner, but its location on the Note 8 is ridiculous. Even with large hands, its inconvenient to have to reach up, right next to the camera lenses to unlock. Plus, if it's laying flat on a table, you have to pick it up first to use it. It would have been much better to have it where the Samsung logo is.

The iPhone X performs much better in benchmarks, but we won't get too far into that since in real world use there's not much of a difference other than some UI lag every once in awhile on the Note 8. The iPhone X's extra performance will come in handy if you're a person who keeps their phones for a few years.

Battery life is close, with the Note 8 coming out on top by a slim margin. But we definitely noticed that the note 8's battery drains much faster in standby.

The Galaxy Note 8 does have more RAM. In specific tests when you're opening a bunch of apps, it'll keep apps open longer, but for most of us, there's really no difference.

One of my big complaints with the iPhone X was the control center being at the top. With the Note 8 we have the same scenario, just a larger screen to reach across to access it.

One aspect I really love about the Note 8, and android in general, is the notification bar at the top. I used to miss a lot of notifications when I switched to an iPhone since it's easy for me to pass over the smart icons. If you don't clear up all your texts and emails, one number higher won't really mean anything.

Thankfully with iOS 11 I can now pull down notifications, but I still prefer the notification bar since I can see that I've gotten a new email or text since the last time I checked the app.

The last software feature where I think the note excels in up on top is multi-tasking. The ability to have multiple apps open at once is a phenomenal. The iPhone X's quick app switches is nice, but nothing like watching a video while getting through emails at the same time.

Now onto the S Pen. I've owned almost every single note phone, except the note 7, which I avoided for the obvious reasons, and with each one of those phones I used the S Pen for a few days, and then never use it again until I bought a newer Note Phone. The stylus really isn't much for use for me so I can't count it against the iPhone for not including one.

Both of these phones are the best from each company, and you really can't go wrong with either one. If you're a Mac user you'll likely choose the iPhone X. While the Apple ecosystem does make it tougher to use an Android phone, My personal choice is still the iPhone X even if I didn't use other Apple devices.

The mix of great performance, nice display, convenient Face ID, surprisingly good speakers, and software that may limit options but lets me do what I need as simply as possible seals the deal.
«1234»