AppleInsider
Posted: April 17, 2018 6:21PM
in iPhone edited April 2018
Continuing the comparison between Apple's iPhone X and Samsung's Galaxy S9 Plus, AppleInsider pitted the flagship smartphones against each other in a number of battery life tests, to see which can last the longest. Can the battery in Apple's premium device out-last its main rival? 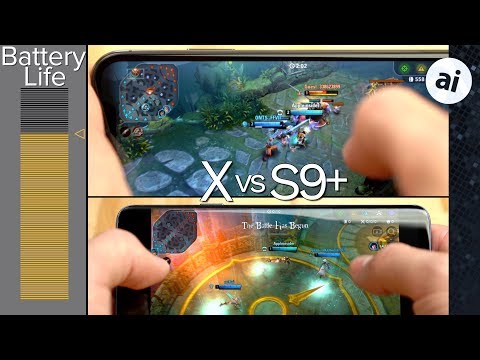 AppleInsider has performed quite a few tests to compare Apple's iPhone X against the competing Samsung Galaxy S9 Plus, and credit has to be given to Samsung for the improvements it has made to the latest flagship release over last year's Note 8. While a full comparison between the two devices has already been made, one piece of the puzzle has been left out: battery life.

Both handsets are equipped with OLED screens, which offers both good and bad things to a device's battery life.

On the good side, OLED technology means each pixel is individually backlit, allowing for pixels to use only the power it needs for the required brightness. This can lead to increased battery life, as shown in our Dark Mode battery test video, as well as a higher contrast display.

Conversely, OLED displays can also consume more power per pixel when displaying bright or white colors when compared to traditional LCD displays. If your mobile device has an OLED screen, it is recommended to turn on auto-brightness and use a dark theme wherever possible to extend its battery life.

Looking at the two screens, the Galaxy S9 Plus actually has a physically larger and higher resolution display than the iPhone X, so in theory it should consume more power. The bigger device also has a 3,500 mAh battery, which is approximately 29% larger than the iPhone X's 2,716 mAH battery, so it has a lot more juice to work with.

The iPhone X battery is more comparable in capacity to the regular Galaxy S9's 3,000 mAh battery, but in this particular test, we're comparing the best phone that each company has to offer.

The first test was relatively simple, measuring how much battery would be consumed overnight on both phones, if they were left alone with no apps running. They were charged to 100 percent, all background apps were closed, and the two smartphones were left in the office until the following morning.

Approximately 16 hours later, the Galaxy S9 Plus said it was at 85 percent capacity, but oddly the iPhone X read it was at 99 percent charge.

Some users anecdotally claim that iPhones have better standby battery life. While that may be true, 99 percent remaining after 16 hours seems unrealistic.

Last week, a battery life test on the iPhone X showed impressive savings when using YouTube's dark theme. Unfortunately, the same theme isn't yet available on Android, so for the S9 Plus, the same test was performed using the default YouTube theme.

Both phones were set to approximately 80 percent brightness, and played a three-hour YouTube video. After three hours, the iPhone X was down to 55 percent charge remaining, while the S9 Plus reached 67 percent, meaning Samsung's device wins this test by a good margin.

A fairly graphics-intensive game named Vainglory 5v5 was played on both phones for exactly one hour. We were going to play Fortnite, but it is currently only available on iOS.

For this test, the brightness was cranked up to 100 percent, with the aim of maximizing battery usage and hopefully showing a bigger difference in results.

After an hour of play, the iPhone X was at an impressive 87% battery life, and the Samsung was at 84%.

Since the S9 Plus has a larger battery to begin with, it would probably outlast the iPhone X if you played until both batteries drained. Either way, they both did a great job, considering brightness was maxed out.

Probably one of the most accurate ways to test the battery life, Geekbench 4's battery benchmark was used on both handsets. First, was the app's partial discharge test, which dims the screen, and runs processor intensive tasks for 3 hours straight.

The iPhone X was at 40 percent battery life at the end of three hours, giving it a score of 2,566.

The Galaxy S9 Plus finished with an extremely impressive remaining charge of 63 percent. This helped it score a massive 4,592, which is 79% higher than the X.

We noticed that the Samsung did really well in longer battery tests. Without being able to see the battery's actual condition, based on these tests it seems like the iPhone X inaccurately displays the battery percentage while closer to a full charge, and quickly drops to catch up with its actual battery life when nearing empty.

For our final test, we ran Geekbench 4's battery benchmark again, except now we ran the full discharge test. This is similar to the partial discharge, except it runs until completion, as the name suggests.

The iPhone X was completely drained after 4 hours and 45 minutes, scoring 2,845 points. This score ended up being slightly better than on the partial drain test.

The S9 Plus, on the other hand, lasted 7 hours and 22 minutes before completely draining. Again, Samsung's result towered above the iPhone X, with the S9 Plus achieving 4,420 points.

The Samsung completely blew the iPhone X out of the water with this last battery test, but why is there such a big difference here compared to the others?

We already know the S9 Plus' battery is almost a third larger than the iPhone X, giving it an advantage, but there's another element to consider: processing performance. The iPhone X has more than double the performance of the Galaxy S9 Plus in Geekbench 4's single-core benchmark, and also scores 26 percent higher than its Samsung rival in multi-core performance.

Since these last two benchmarks focus on putting a 100-percent workload on the CPU, the iPhone X is naturally going to require more power when running at full tilt. While the extra battery probably helps even out the consumption in size difference, the lower-performance processor is probably doing less work than the iPhone X and doesn't need as much power over time.

When looking at the tests overall, it's safe to say that the Galaxy S9 Plus is undoubtedly superior to the iPhone X in terms of battery life, despite the size difference.
«12»