AppleInsider
Posted: November 3, 2018 3:40PM
in iPhone
Continuing the comparisons between the iPhone XS Max and the Google Pixel 3 XL, this time AppleInsider looks at the gaming credentials of each device, by putting both of the premium smartphones through a few rounds of Fortnite.

We recently got the Pixel 3 XL in our hands and we've been comparing everything we can from processing performance, the audio quality of the speakers, to the images produced by the cameras, to the iPhone XS Max.

This time, the devices are being put through their paces in Fortnite, the popular first-person shooter, which tests their graphical and processing capabilities. It also allows us to measure how much battery life is being used by each smartphone while playing at maximum brightness, to determine which will provide the longest gaming sessions. 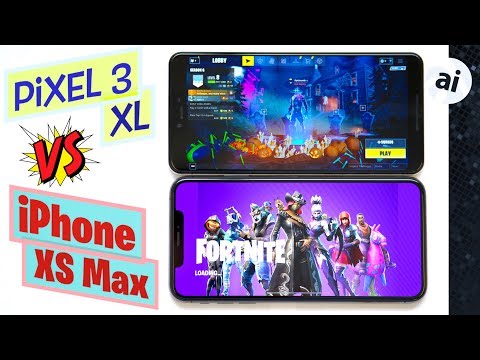 The XS Max easily outperformed the Pixel 3 XL in earlier benchmarks, especially in Geekbench 4's graphics test, which is what matters the most for graphics-intensive tasks like playing Fortnite. This should give Apple's handset a distinct advantage.

The Pixel 3 XL also has the largest notch we've ever seen in any phone, so it'll be interesting to see how it impacts gameplay.

After playing an hour of Fortnite on each phone, here's what was observed.

The iPhone XS Max has the bigger screen, and a less obtrusive notch than the Pixel 3 XL

This made the gameplay controls more cramped on screen compared to the XS Max, which just felt so immersive thanks to the larger screen area and a brighter screen.

Even with a brighter display, the XS Max was able to demonstrate better battery life, draining just 23 percent of the battery compared to 29 percent on the Pixel 3 XL after an hour of gameplay.

Performance-wise, the Pixel 3 XL experienced a few dropped frames on a consistent basis, and once the Pixel's battery reached below 20 percent, I started to notice that the graphics quality dropped significantly. Some scenes looked absolutely terrible, almost as if the game automatically reduced the visual quality to the minimum to try to conserve battery life.

When the Pixel 3 XL is low on battery, Fortnite lowers its graphical settings

The XS Max's graphics stayed exactly the same for the full hour of gameplay, with smooth performance and no noticeable dropped frames throughout the session.

With all of that said, we can easily say that Apple's iPhone XS Max is superior to Google's Pixel 3 XL in terms of Fortnite gaming performance, and those results should translate to other mobile games as well.

Deals on the iPhone XS Max and Google Pixel 3 XL

If you haven't already ordered Apple's iPhone XS Max, wireless carriers are incentivizing the purchase. Want to get your hands on a new device asap? eBay sellers are also shipping units now.

Those interested in purchasing the Google Pixel 3 XL can save up to $300 with an eligible trade at Verizon Wireless.