AppleInsider
Posted: May 23, 2019 4:43PM
in Future Apple Hardware edited June 2020
Apple is considering the possibility of adding flexible OLED displays to its 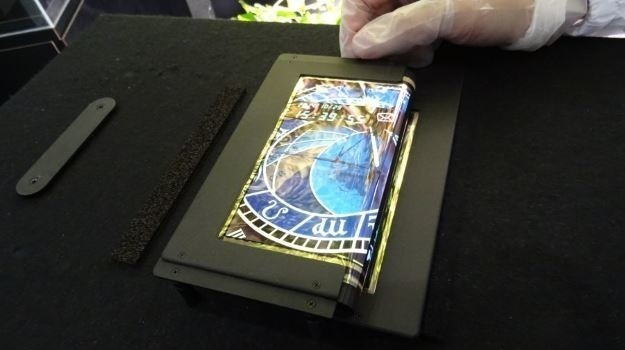 An early prototype of a flexible display panel

Rumors and speculation have pointed to Apple possibly using OLED panels in its newest products, following its success in the iPhone X and later iPhone models. The technology boasts higher contrast and a more vivid display compared to the existing LCD display systems that currently power Apple's Mac lineup.

According to sources of TheElec, Apple is "considering adoption of OLED displays in its high-end Pro models of notebook and tablet PC product lines." Specifically, Apple is tipped to introduce a 16-inch MacBook Pro with an OLED display, while the 11-inch iPad Pro will switch from LCD to OLED.

Samsung has been tipped as a supplier of the OLED panels, but it is apparently negotiating supply of the components using a Thin Film Encapsulation (TFE) method of production, one that offers a number of benefits.

Typically associated with the production of flexible OLED panels, TFE uses a thin film layer instead of a glass substrate to hold the OLED panel, resulting in a thinner overall panel. There is also no need to add backlight modules as would be required for LCD, as OLED is self-illuminating, saving even more space.

By creating a thinner panel, this could lead to even thinner versions of the MacBook Pro and iPad Pro, or a similar size but with more space for other components, such as increased battery capacity.

While the technology is for a flexible OLED, it does not mean that the MacBook Pro or iPad Pro would take advantage of the bendy nature of the component, just the space and weight-saving aspects.

Samsung is keen to become a display supplier to Apple for its folding technology, and has reportedly sent samples for potential use in the 2020 iPhone. The samples were sent in March, long before the withdrawal and delays in the release of the Galaxy Fold, a smartphone that showcases the technology's flexibility.