AppleInsider
Posted: July 30, 2019 8:14PM
in iPhone edited July 2019
The U.S. Department of Justice has sentenced a Chinese national to over three years in prison for trafficking counterfeit Apple goods into the United States from China, including fake iPhones and iPads, as part of a criminal conspiracy that made over $1.1 million in the United States alone. 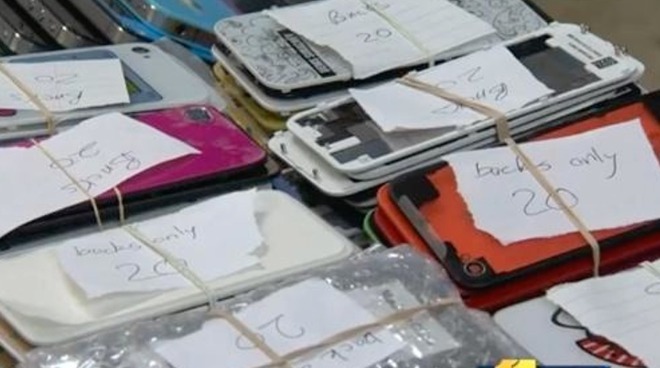 Counterfeit Apple products seized by Maryland police as part of a separate case in 2013.

Jinhau "Jeff" Li, a 44-year-old who stayed in the US on a student visa, pleaded guilty in February 2018, but has only just been sentenced to 37 months in prison followed by a year of supervised release. Li had previously admitted guilt to one count of conspiracy to traffic in counterfeit goods and labels and to smuggle goods into the United States, and one count of trafficking in counterfeit goods.

According to US DOJ documents Li worked through his company Dream Digitals with Andreina Becerra, Roberto Volpe, Rosario LaMarca, and others to smuggle more than 40,000 electronic devices and accessories. The items included fake iPhones and iPads, as well as labels and packaging bearing counterfeit Apple trademarks.

LaMarca, Becerra, and Volpe have previously pleaded guilty for their roles, with LaMarca serving 37 months in prison, Volpe in prison for 22 months, and Becerra handed three years of probation.

It took the cross-jurisdictional collaboration of the HSI Newark Seaport Investigations Group and the Bergen County Prosecutor's Financial Crimes Unit, along with help from Europol and Italy's Guardia di Finanza, to successfully uncover the crime.