AppleInsider
Posted: August 21, 2019 9:33PM
in General Discussion edited December 2019
With physical Apple Cards now making their way into the hands of consumers across the U.S., Apple this week offered up a few tips for cleaning, caring for and storing the titanium card with its specialized finish. 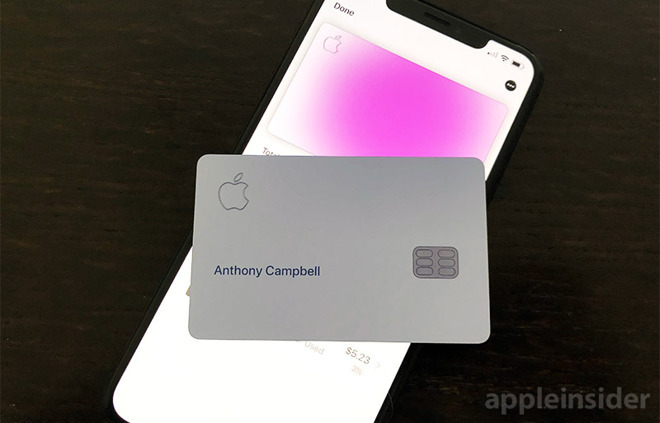 A "How to clean your Apple Card" explainer was posted to Apple's website as a Support Pages document on Tuesday, describing steps users should take to maintain the condition of their shiny new credit card.

If and when the card gets grimy, Apple suggests wiping it gently with a soft, slightly damp, lint-free microfiber cloth. As a second step, users can moisten a microfiber cloth with isopropyl alcohol and wipe again. Basic household cleaners, compressed air, aerosol sprays, solvents, ammonia or abrasives should not be applied to Apple Card, Apple says.

Interestingly, certain fabrics like leather and denim could permanently discolor the card's matte white finish, which is achieved through a multi-layer coating process. That same coating might be damaged if it comes in contact with hard surfaces or materials.

As AppleInsider noted in its unboxing and hands-on last week, the white layer covers the face and back of Apple Card. Logos for Apple, Goldman Sachs and Mastercard are etched through the finish and into the titanium card below, while the cardholder's name is printed on the front surface.

To avoid nicks, scratches and other unwanted ill effects, Apple advises users to store Apple Card in a wallet, pocket or soft bag away from hard objects and other cards.

Because it's a credit card with a mag stripe, Apple Card should not be stored or placed near magnets as the strip could become demagnetized.

If a card is damaged (gasp!), lost or stolen, customers can request a replacement directly in Apple Card's Settings menu in the Wallet app under the "Physical Card" heading.

Apple opened applications for Apple Card on Tuesday following a brief preview period in which select Apple Pay customers were granted early access to the product. With a digital-first format, heavy reliance on touchless transactions and deep integration with the Wallet app and Apple Pay, Apple Card is a unique credit card solution that promises to make Apple's ecosystem all the more sticky.
«1234»