AppleInsider
Posted: September 2, 2019 9:36AM
in General Discussion edited September 2019
References to stereo augmented reality apps, as well as the codename "Garta," have been spotted within Apple's internal betas of iOS 13 -- following and apparently refuting previous reports that Apple had abandoned the concept. 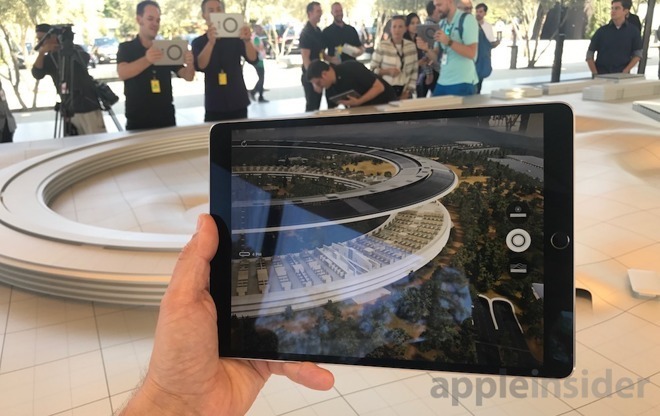 Apple loves AR, but it's surely not expecting us to see the world through iPads all the time

Documentation concerning Apple's in-house beta tests of iOS 13 reportedly include multiple references to functions and apps that support an AR Glasses type of device. While not meaning that we will see AR Glasses launched soon, it appears to mean that recent reports of the device's demise were as wrong as AppleInsider said.

Now, according to MacRumors, the internal Apple beta for iOS 13 includes a range of evidence concerning AR. These include an app called STARTester, which appears to emulate an AR headset for the purposes of testing. This testing app includes references to the different states when a device is "worn" or "held."

Reportedly, there is even a ReadMe file that refers to a system called StarBoard for stereo AR apps, and names a device called Garta. Previously, Apple's internal code name for the whole AR glasses project has been said to be "T288" so this may represent one of perhaps many devices in that range.

As well as this ReadMe file and the testing app, the actual code for this internal build of iOS 13 includes references to "StarBoard mode," "ARStarBoardViewController" and so on.

What will be seen in the forthcoming iOS 13 is the series of improvements that Apple has made to ARKit, the company's framework that allows for augmented reality functions within apps.