AppleInsider
Posted: October 22, 2019 10:52PM
in General Discussion edited October 2019
A Chinese national was sentenced to 37 months in federal prison and three years' supervised release on Tuesday for his part in a counterfeit iPhone trafficking scheme that defrauded Apple out of an estimated $900,000 in warranty replacements. 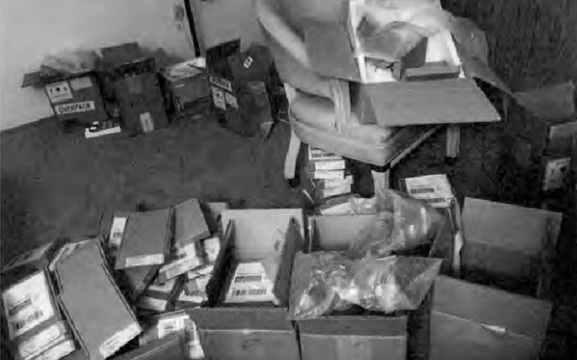 Today's sentencing of Quan Jiang, 30, comes more than a year after the former Linn Benton Community College engineering student pleaded guilty to one count of trafficking in counterfeit goods in April 2018, according to a statement from the U.S Attorney's Office for the District of Oregon.

Earlier this year, Jiang and former Oregon State University engineering student Yangyang Zhou were fingered by federal agents investigating a counterfeiting scheme involving Apple's hardware warranty policies. Both Jiang and Zhou carried out the illicit plan while in the U.S. on student visas.

Between January 2016 and February 2018, Jiang would regularly receive inoperable counterfeit iPhones -- 20 and 30 at a time -- from connections in Hong Kong and send the hardware to Apple, or carry it in to a brick-and-mortar store, for warranty replacement. Genuine articles were sent back to China for subsequent resale. Profits gleaned by the operation delivered to Jiang's mother, who deposited the funds into Jiang's Chinese bank account, the release said.

Law enforcement officials were made aware of Jiang's dealings in April 2017, when U.S. Customs and Border Protection seized a shipment of 28 iPhone 6 handsets addressed to the then-student. Another package containing 25 iPhone 7 Plus units was confiscated six months later. The CBP sent notices of seizure for both shipments, while Apple reportedly issued two cease-and-desist letters in June and July of 2017. Despite the warnings, CBP seized three additional shipments containing 29 iPhones each in November of that year.

Jiang previously denied receiving the notices from the CBP and Apple, but later admitted that he knew the imported iPhones were counterfeit and that seeking hardware replacements was illegal, the U.S. Attorney's Office said.

In all, Jiang imported more than 2,000 counterfeit iPhones during the two-year span, some 1,500 of which were traded in for replacements that carried a value of approximately $600 apiece.

It is unclear whether Zhou faces similar charges for his role in the operation.