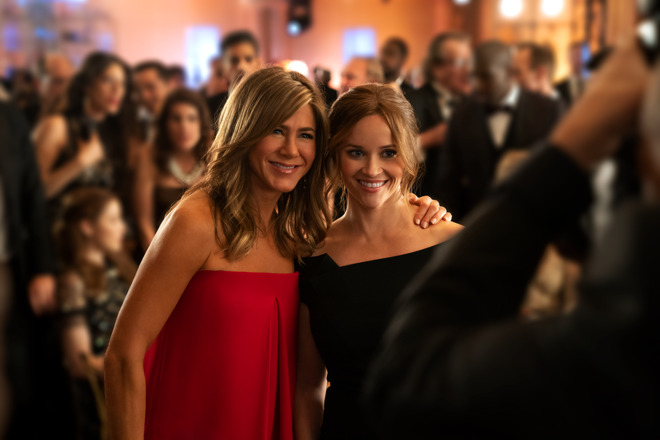 Jennifer Aniston and Reese Witherspoon in "The Morning Show.". (Photo courtesy of Apple)

"Thank you to the Hollywood Foreign Press Association for today's historic nominations," said Zack Van Amburg, Apple's head of Worldwide Video. "After the debut of Apple TV+ just last month, today's nominations are a true testament to the powerful storytelling that went into The Morning Show,' as well as all of our Apple Originals."

"The Morning Show' is resonating with audiences all around the world and today's recognition from the Hollywood Foreign Press Association further reinforces how timely and special this series is," said Jamie Erlicht, Apple's head of Worldwide Video. "Congrats to Jennifer Aniston, Reese Witherspoon, Michael Ellenberg, Kerry Ehrin, Mimi Leder and the unparalleled cast and creative minds behind this project. We cannot wait to continue exploring the world of The Morning Show' into season two."

"I am so grateful to the members of the Hollywood Foreign Press Association for recognizing The Morning Show' and Jennifer Aniston and Reese Witherspoon's outstanding performances," said Michael Ellenberg, executive producer of "The Morning Show." "A huge thank you to Apple TV+ for their incredible partnership and the remarkable cast and crew, who I'm honored to share this nomination with."

Apple, awards, and the Golden Globes

While Apple has previously won Emmys for its "Carpool Karaoke," and a technical Emmy for Siri integration into Apple TV hardware, this is the first time it has been eligible for the Golden Globes.

To be nominated for the Golden Globe Awards that will be presented on January 5, 2020, shows or films must be aired or released within the calendar year 2019. Apple TV+ launched on November 1, 2019, so its flagship series such as "See," "The Morning Show," "Dickinson" and "For All Mankind" were all released on that date.

Consequently they were all within the eligibility period. Theoretically, so was the short-run series "Truth Be Told," but in practice its release on December 6 means it was too late for consideration. It will, however, be eligible for the Screen Actors Guild nominations in January 2020.

Similarly, "Servant" may have missed out because it debuted on November 28, but it had been tipped to be in the running for all of the acting categories as well as Best Drama Series.

"The Morning Show" was believed to be a contender for the supporting acting categories as well as a possible Best Actor for Steve Carell. While "See" and "For All Mankind," had been considered likely to get nods for Best Drama Series.

Industry experts had also predicted that "Dickinson" might be nominated as Best Comedy and Best Comedy Actress for Hailee Steinfeld along with supporting actors Toby Hess and Jane Krakowski.

Prior to the announcement, Apple was known to be aiming to produce films, in particular, that are award contenders. 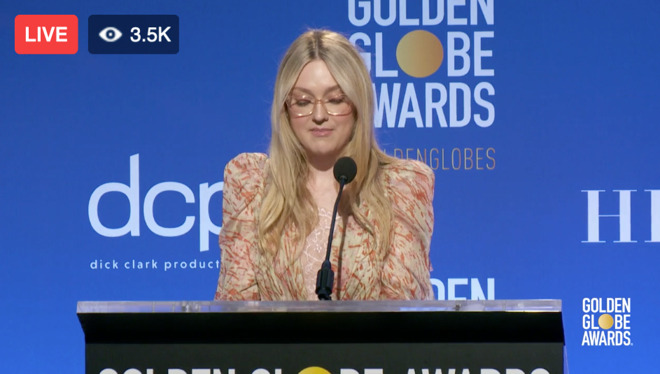 Apple is also believed to be planning to release films theatrically ahead of their screening on Apple TV+ in order that they can qualify for other awards.

The 77th Golden Globes were announced live today and featured 25 categories across film and television. "The Morning Show" was the sole Apple TV+ series to gain nominations.