AppleInsider
Posted: January 5, 2020 5:27PM
in General Discussion edited March 2020
On the 20th anniversary of Internet Explorer 5 for Mac, one of its key developers reveals how Apple's Steve Jobs ignored agreements, and made Microsoft pull features from its browser. 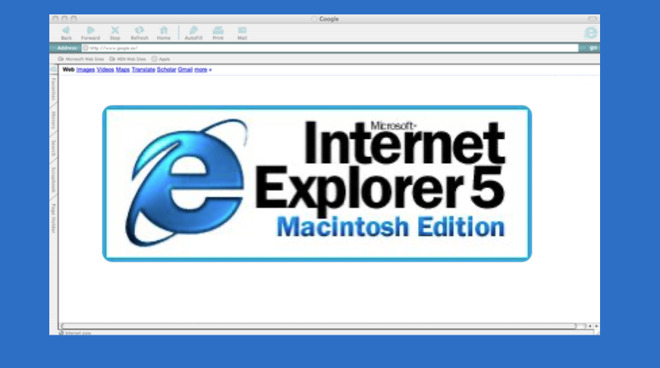 Composite reconstruction of Internet Explorer 5's splash screen on a typical browser window of the time.

Microsoft Internet Explorer 5 Macintosh Edition was announced on January 5, 2000 at Macworld Expo, where Steve Jobs demonstrated it alongside OS X. Now on the 20th anniversary of that demo, developer Jimmy Grewal has been describing both how the influential app was created -- and how he and his team would come to regret giving in to Jobs's demands.

"MacIE 5 was built by a team of [around] 40 talented & dedicated people in Microsoft's Mac Business Unit (MacBU) based in San Jose, CA.," says Grewal in a Twitter thread. "I joined that team fresh out of university in June '99 and helped design some of the features of MacIE 5, and also managed the Mac OS X version."

1/ Today marks the twentieth anniversary of the introduction of Microsoft's Internet Explorer 5 for Mac. This was both the most important release of Internet Explorer for the Mac, and the last release. Here are some anecdotes and thoughts from an insider's perspective. [thread] pic.twitter.com/TLiloQX0DU

Internet Explorer 5 for Mac featured a design highly reminiscent of the early OS X desktop, though Grewal says this was coincidence -- at least on Microsoft's part.

"This 'new look' had an uncanny resemblance to Apple's later Aqua interface for Mac OS X," continues Grewal. "However it was developed in complete secrecy within Microsoft. When we previewed MacIE 5... to Apple in the Summer of 1999, Jobs was not pleased."

In an accompanying blog on the same topic, Grewal quotes a colleague, Maf Vosburgh, saying that their "new look" started with an idea to match hardware with software. Vosburgh says the idea was that if you had a Bondi blue iMac, then IE 5 would use that same color.

"So did Steve see our Summer 1999 New Look demo and tell his team to create Aqua?" says Vosburgh. "Who knows. Our stuff was in any case inspired by Apple's hardware designs, so I can't feel too bad about it."

While Vosburgh says that Jobs was enthusiastic about Microsoft's design, Grewal tells a slightly different story about what may have been a later demonstration.

"Since no one outside Apple was supposed to know about Aqua at the time, [Jobs] couldn't say anything to us about the resemblance," he says. "[And instead] he directed his ire at another new feature in MacIE 5 called Media Toolbar. This feature provided support for playing back MP3's on websites."

Media Toolbar was significant because it leveraged SoundJamp MP, the same software that Apple was in the process of acquiring to create iTunes.

"Jobs insisted we cut this feature claiming it undermined QuickTime," continues Grewal. "Some time after the launch of MacIE 5, Apple acquired SoundJam and its development team. It was released by Apple under the name iTunes. We cut the feature and deeply regretted it."

For that January 5, 2000 announcement, Internet Explorer 5 for Mac would be included in Steve Jobs's keynote instead of getting a regular demo from a Microsoft executive.

"It was quite an unusual request. Talking points were agreed, but much to our dismay Jobs didn't mention a single one," says Grewal.

Instead, Jobs "implied" that the overall look of the browser was a result of it using Apple's standards.

"But other than the scroll bars and window controls, the rest was generated by the UI code in the app and looked identical in the Mac OS 9 version," says Grewal. "From the horizontal pin-stripped background of the toolbars, to the 24-bit semi translucent buttons and Gaussian-blurred menu backgrounds, none of it was part of Apple's Aqua UI elements in the Carbon toolbox... yet to the casual observer they were almost indistinguishable."

Despite Jobs ignoring the agreed points, and despite later regrets about cutting the Media Toolbar, Grewel says that he and the team were proud of the app.

"The response to MacIE 5 at Macworld and by the press was better than we had hoped, probably helped by the fact that it looked great and very similar to some of Apple's own apps running under the yet-to-be-released Mac OS X," he says. "We were all proud of the work we had done, the critical acclaim, and the enthusiasm of Mac users who had traditionally frowned upon Microsoft's past efforts to build Mac software."

Microsoft Internet Explorer 5 for Macintosh was released on March 27, 2000. Its final version was released in 2003.

Shortly afterwards, Jimmy Grewal left Microsoft. Writing in 2005 about his experiences with Internet Explorer he said Apple "was a pain in the ass sometimes."

"For a company with such great PR, they really were very unprofessional and treated developers poorly. I know that the OS X transition was tough, but there are so many stories I could tell of stupidity at Apple and policies which made no sense," he wrote.

"There were times during the last two years of working at Microsoft that I really hated Apple's management," he continued, "which was very difficult for me being such a loyal fan of their products and having so many friends who worked there."
«12»