AppleInsider
Posted: March 12, 2020 12:22PM
in General Discussion edited July 2020
Apple is looking to build on the Touch Bar by giving it the ability to detect finger movements and hand gestures in the air, rather than requiring users to touch and swipe on the Bar itself. 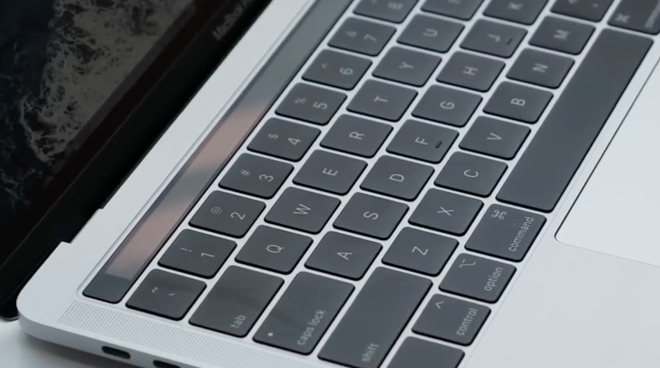 The Touch Bar could be augmented by the ability to detect finger movement above it.

A new patent application shows that Apple is looking at ways of extending its Touch Bar concept. Users may be able to gesture above the bar with what Apple calls a "sensing strip" on MacBook Pro models.

"Electronic Device with Sensing Strip" describes a notebook that might give new meaning to the name MacBook Air.

"An electronic device may have an elongated sensing strip," says the patent. "Control circuitry may use the sensing strip to gather air gesture input from the fingers or other body part of a user."

"Non-contact gestures (sometimes referred to as three-dimensional gestures or air gestures) may involve this type of lateral swiping motion and/or may involve movement of one or more of the user's finger in the vertical (Z) dimension away," it continues.

So rather than having to look to see the place on a Touch Bar to operate, say, the volume controls, a user may be able to wave their hand over a "sensing strip" instead. Certainly they won't have to be so precise with where they tap their finger.

The intent of this particular patent application is practically the opposite of Apple's recent one on potentially adding screens to MacBook Pro trackpads and keyboards. That one posited that people look away from their screens and down to their keyboards, saying that it is "difficult for the user to maintain visual focus on both the keys being typed and the main display rendering the typed characters." 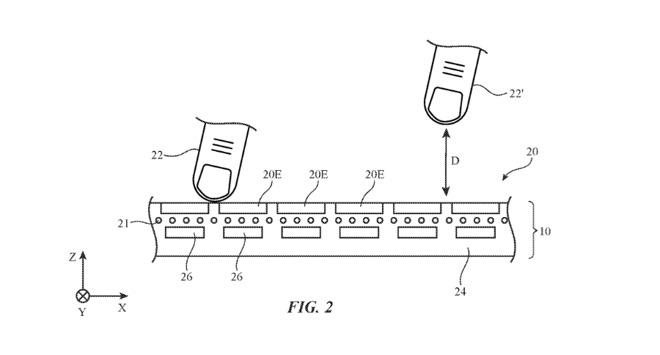 This latest patent disagrees. "It can be challenging to operate electronic devices using certain input devices," it says. "For example, some input devices may operate best when a user is looking directly at the device. This may cause the user to look away from content that is currently being presented on a display and can disrupt a user's work flow."

So this patent is for touch-typists. It aims to give users the ability to focus on the screen, and control aspects of their Mac as easily as they can type. This ability to use "air gestures above the sensing strip" is intended to be a supplement to touch, though rather than a replacement.

"The sensing strip may also... detect touch events associated with direct contact of a user's fingers or other external objects with the sensing strip," continues the patent.

So a strip could retain the same functionality as a Touch Bar, but add this extra ability to recognize and respond to more vague gestures in the air above the device.

"In general, any dynamic finger activity (up and down movement in the Z dimension, lateral movement in the X and/or Y dimensions, etc.) can be used in controlling [the] device 10," says the patent. "As an example, [the] sensing strip... can detect how rapidly a user's finger is moving towards... and can use this information to implement a velocity sensitive virtual piano key in a music application."

The sensor strip patent application has three inventors, Adam T. Garelli, Dinesh C. Mathew, and Senem E. Emgin. Garelli and Mathew were both previously credited as inventors on the a parent regarding redesigning the iMac into a single sheet of glass, plus Garelli and Emgin were both previously credited on a patent for how future iPad keyboards could connect to the touch screen instead of the Smart Connector.