Apple Car could have an energy-saving active suspension system

AppleInsider
Posted: October 27, 2020 6:50PM
in Future Apple Hardware
The Apple Car could have an intelligent active suspension system, one that includes a way to store and maintain a level of pressure in a hydraulic system to enhance the ride of the car for drivers and passengers. 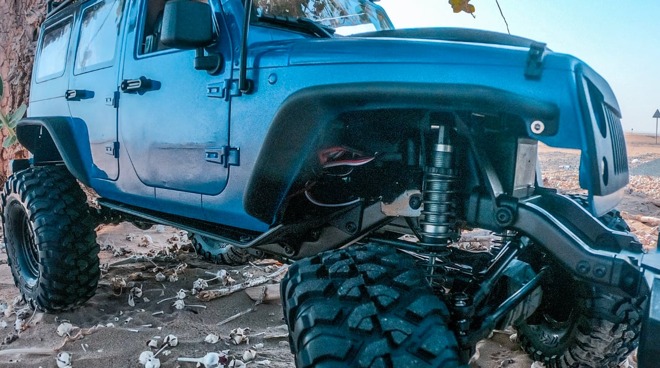 An extreme example of a car's suspension system [Pexels]

Suspension systems are a common element of vehicles, used to ensure a smooth ride by minimizing the impact of bumps on a road or vehicle swaying in corners. Some cars use a form of active suspension system that provide more control over the position of wheels in relation to the chassis, which can perform a better job at minimizing corner roll and road bumpiness.

In many cases, these active systems take the form of hydraulics, controlled by an onboard computer to quickly add and remove fluid from sections of the suspension, in turn maintaining a wheel's position on the road while keeping the ride smooth. The amount of fluid can also be adjusted on the fly, changing how soft or firm the suspension is for the driver on command.

While most cars still employ a form of passive suspension system that uses springs and shock absorbers, active suspensions tend to be used in higher-priced vehicles. According to a patent published on Tuesday by the US Patent and Trademark Office, it seems that Apple may end up using such a system in the Apple Car. 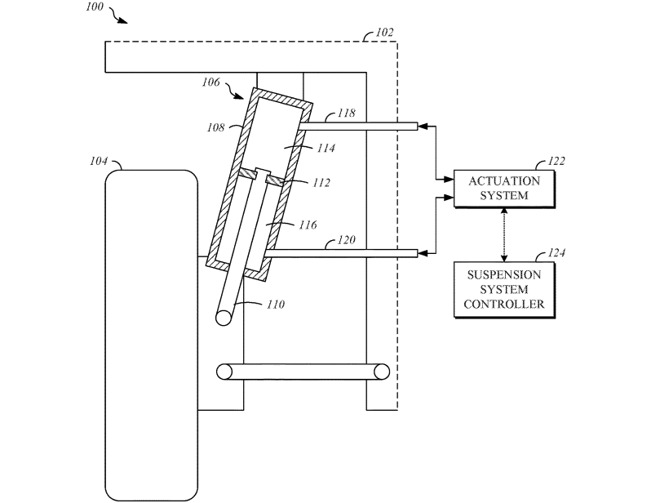 Apple adds an extra element to the relatively simple design, namely a separate "energy storage device." This consists of a cylinder with connections at the top and bottom that feed into the same hoses as the hydraulic actuator, and can freely move the hydraulic liquid between itself and the piston chambers.

The energy storage device has a central element that effectively divides it in two, making two more chambers in a similar fashion to the main actuator. This central element isn't fixed in place, and is able to move along the length of the container, largely depending on the amount of liquid in each of the chambers.

The key point is that the central element is compressible, namely that it exerts an outward force into the two chamber areas, but can be pushed back by the hydraulic fluid. This central element could use springs to push outward, though it can also contain gas, which again could be pumped in and out of it to alter how much it compresses.

The patent doesn't explain why Apple desires a compressible section or an "energy storage device" in an active suspension system, but it is probably due to being a largely automatic way of maintaining pressure within the suspension system itself. It would feasibly be able to ensure there's an even amount of pressure applied to both the upper and lower chambers of the storage device at all times. 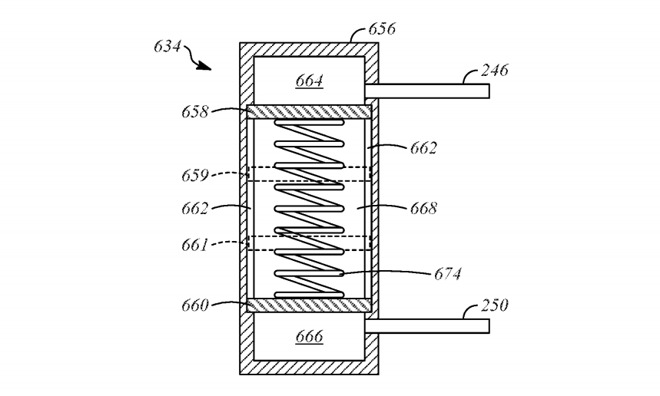 An 'energy storage device' has a compressible core to maintain pressure in the hydraulic system.

Such a system may also reduce the amount of hydraulic fluid that is required for operation, and may even give more control over the ride firmness, especially in the gas-based compressible section version. It could also potentially reduce the amount of shock on a system where the piston in the actuator is forcibly moved by unfavorable driving conditions.

Apple files numerous patent applications on a weekly basis, but while the existence of a patent indicates areas of interest for Apple's research and development teams, it doesn't guarantee the idea will appear in a future product or service.

Though Apple hasn't confirmed the existence of a self-designed car, outside its self-driving testing effort, it has collected a vast number of patents relating to various elements of car design. The catalog ranges from safe automatic recharging and steering systems, to doors that automatically limit their range based on nearby obstacles.