AppleInsider
Posted: November 10, 2020 8:45PM
in General Discussion edited March 2021
While Apple was touting the improved graphical capability of the new Apple Silicon Macs, they neglected to mention during the event that the M1 chip does not support eGPU technologies. 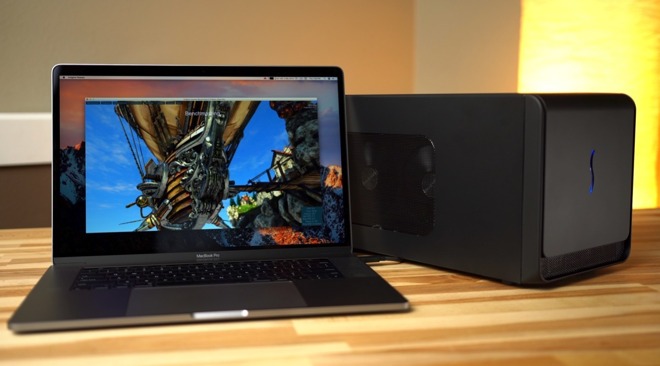 A MacBook Pro with an external GPU.

AppleInsider has confirmed that the new Apple Silicon Macs based on the M1 processor will not support any external graphics processing units. This means the new Mac mini, MacBook Air, and 13-inch MacBook Pro will solely utilize their own on-processor GPUs.

This confirms a previous suspicion after developer support documentation appeared to imply that support for all non-Apple GPUs would be dropped. The current developer document primarily refers now to what it describes as "Apple family GPUs."

Furthermore, Apple has removed its preferred solution, the Blackmagic eGPU, from the list of compatible accessories for the Mac mini, the MacBook Air, and MacBook Pro with Apple Silicon chips.

Apple has only comparatively recently supported external GPUs. At times, though, it has also seen failures in that support, with certain combinations of Mac and GPU card causing problems in macOS Catalina. And, Nvidia support is lacking in its entirety.

It's not known whether future Apple Silicon processors, such as the previously-rumored "A14T" option, will restore eGPU support.
«1234»