AppleInsider
Posted: November 18, 2020 1:25AM
in Mac Software edited November 2020
Google on Tuesday rolled out a new version of the Chrome web browser with support for Apple's new M1-powered Macs, though distribution has been paused due to unforeseen issues. 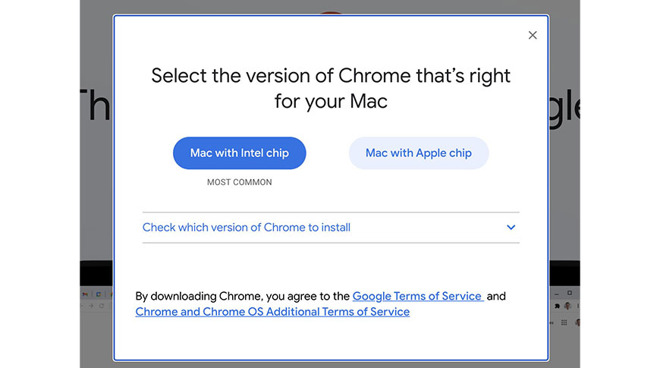 The root of the problem was not revealed, though Google engineers discovered a workaround that involves adding Chrome as an approved application under Bluetooth privacy in Mac's System Preferences. Alternatively, users can uninstall Chrome, visit google.com/chrome and download the "Mac with Intel chip" option, which will run in Rosetta 2.

Google's M1-compatible Chrome iteration arrived alongside a version for x86 machines that includes a host of performance and efficiency improvements. While the two variants include an identical feature set, an M1-native version should, in theory, run more smoothly and afford faster processing speeds on Apple silicon Macs.

According to Chrome product manager Mark Chang, Google will push out a patched revision of the browser tomorrow.

When the M1 Mac version does launch, users visiting Chrome's download page will be met with a prompt to download the app for a "Mac with Intel chip" or a "Mac with Apple chip."