AppleInsider
Posted: November 21, 2020 10:46PM
in iPod + iTunes + AppleTV
Universal Electronics is offering its own version of an easy-to-use "button-style" remote control for the Apple TV, one it hopes to sell to cable companies to be included as part of a streaming video package. 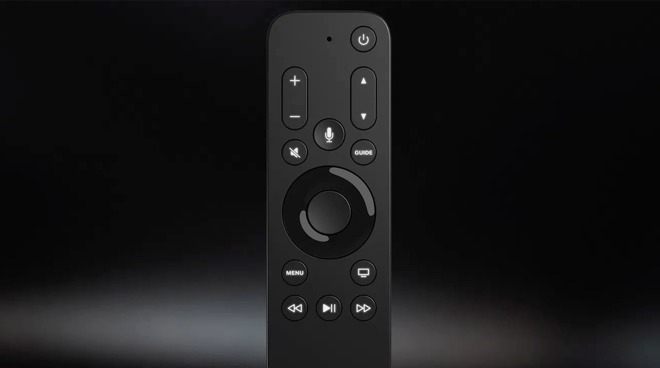 The Apple TV has been offered as a bonus from some cable companies for a few years, with Apple's set-top box used as an alternative to the usual cable box or DVR. Now, one company is attempting to take advantage of the concept by enabling cable providers to further brand their Apple TV-based package, one that also does away with the Siri Remote.

Universal Electronics Inc. (UEI) announced on Friday it was producing its own Apple TV remote, one that is intended to be acquired and distributed by cable providers, reports The Verge. Following a similar path to the Button Remote for Apple TV, its own version offers more buttons for users to press, rather than relying on a trackpad.

Instead, the remote uses a directional control pad, along with media navigation keys, menu and Home buttons, power button, and channel and volume up and down buttons. The remote also includes a button for making Siri requests.

Billed as enhancing "the live TV experience," the remote also has a dedicated button marked "Guide," which will automatically open up the cable provider's electronic program guide within their tvOS app.

Using Bluetooth LE to communicate with the Apple TV itself, with support for Apple's MFi authentication, the remote also uses infrared to provide a universal control function for the television. Lastly, cable providers can add their own branding to the remote.

UEI advises orders for the remote control can be placed from December, but only by "Multichannel Video Program Distributors," not consumers. The intention is for it to be acquired and then supplied together with an Apple TV or Apple TV 4K to consumers.

Consumers still have a number of other options available to them if they do not want to use the Siri Remote, such as Function's Button Remote.
«12»