AppleInsider
Posted: December 17, 2020 11:58AM
in General Discussion edited December 2020
Continuing its theme of defending small businesses, Facebook has taken out another full-page newspaper ad claiming that Apple is trying to change the internet for the worse. 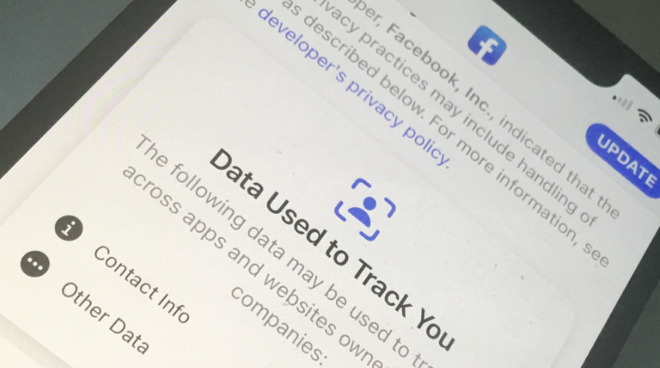 Following both one newspaper ad and a blog post, Facebook has now taken out a second full-page advert doubling down on its criticisms of Apple's privacy features. It again claims that the forthcoming ad tracking prevention in iOS 14 will damage small businesses.

Facebook's protest is against how Apple is shortly to require users to give permission for ad tracking, and do so app by app. That requirement was going to be part of the initial iOS 14 release, but Apple delayed it until early 2021.

As highlighted with Apple's new privacy or "nutrition" labels, Facebook gathers a great deal of data about users from its app. Facebook now says it expects to see a 60% drop in its income because of the privacy changes, having previously estimated 50%.

In a statement to AppleInsider, Apple responded to the attack ads. The company said companies like Facebook are welcome to continue tracking users, so long as those users have a choice in the matter.

"We believe that this is a simple matter of standing up for our users. Users should know when their data is being collected and shared across other apps and websites -- and they should have the choice to allow that or not," Apple said. "App Tracking Transparency in iOS 14 does not require Facebook to change its approach to tracking users and creating targeted advertising, it simply requires they give users a choice."

The text of the ad has been seen by AppleInsider and is as follows. All emphasis is Facebook's.

Apple plans to roll out a forced software update that will change the internet as we know it -- for the worse.

Take your favorite cooking sites or sports blogs. Most are free because they show advertisements.

Apple's change will limit their ability to run personalized ads. To make ends meet, many will have to start charging you subscription fees or adding more in-app purchases, making the internet much more expensive and reducing high-quality free content.

Beyond hurting apps and websites, many in the small business community say this change will be devastating for them too, at a time when they face enormous challenges. They need to be able to effectively reach the people most interested in their products and services to grow.

Forty-four percent of small to medium businesses started or increased their usage of personalized ads on social media during the pandemic, according to a new Deloitte study. Without personalized ads, Facebook data shows that the average small business advertiser stands to see a cut of over 60% in their sales for every dollar they spend.

Small businesses deserve to be heard. We're standing up to Apple for our small business customers and our communities.