Foldable iPhone may use geared hinges to fold inwards or outwards

AppleInsider
Posted: December 31, 2020 2:22PM
in General Discussion edited January 2021
Apple is researching the use of geared hinges that would strengthen a foldable iPhone's screen. These hinges could allow the iPhone to be folded both inwards like a book, and outwards to have a form of wraparound screen. 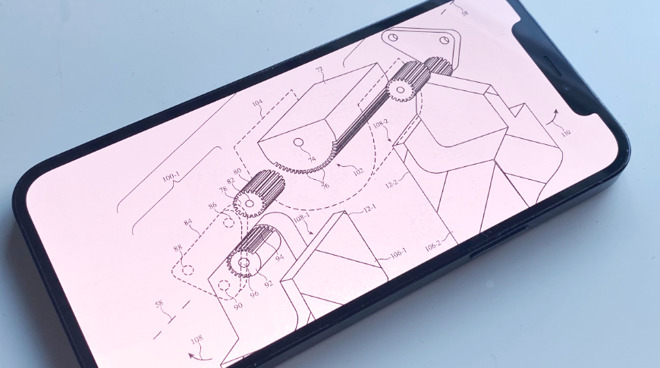 Detail from the patent showing geared hinges on a foldable display

Apple has previously applied for many patents about a foldable iPhone, ranging from slidable displays and scroll-like screens, to ones with articulated hinges. There are now so many that it's surely certain that a foldable iPhone is coming -- but also that these overlapping or conflicting research options can't all be used.

A newly revealed patent application, "Folding Electronic Devices With Geared Hinges," for instance, is similar but seemingly incompatible with prior ones about hinges. This one is unusual, though, in how it covers a hinge option that could allow for the iPhone to be folded in two directions.

"When compact size is desired in a folding configuration, device can be adjusted to be compact by folding portions... together," says the patent application. "Device and display may, as an example, be folded inwardly and/or outwardly about [a] bend axis."

It's highly possible that this description is actually Apple doing what it always does in patents, and attempt to cover every conceivable interpretation of its idea. For example, this patent application's drawings are all about the iPhone, but Apple makes sure it says the foldable display could be for anything from a phone to a laptop, and even goggles or a kiosk.

Nonetheless, this application emphasizes that a device using its method of geared hinges could be made to fold one way and/or the other.

Whether Apple decides to make an iPhone that folds one way or two, the key concern of this patent application is to provide the maximum viewable display while not sacrificing portability.

"If care is not taken, a display may not offer sufficient screen real estate to display information of interest to a user," says Apple. "At the same time, it can be difficult to enlarge the size of electronic devices too much to accommodate larger displays, because this can make devices bulky."

"The hinge may include gears that are fixedly attached to the first and second housing portions and that engage the rotating gears," says the patent application. "Linkage members may hold together the rotating gears, fixed gears, and the rack member."

The most striking part of the idea is that an iPhone could be made where you open it up like a book to read, or you wrap one display around the back of the other. Whether or not Apple chooses to allow both options, this patent application suggests that geared hinges would make any folding screen more robust.

Previous rumors have said that Apple may have ordered foldable OLED screens from Samsung. Separate reports have said Foxconn is testing the foldable iPhone at present.