AppleInsider
Posted: January 22, 2021 11:07PM
in General Discussion
The majority of streaming service customers subscribe to Netflix but only 14% can say the same for Apple TV+, according to a new J.D. Power survey. 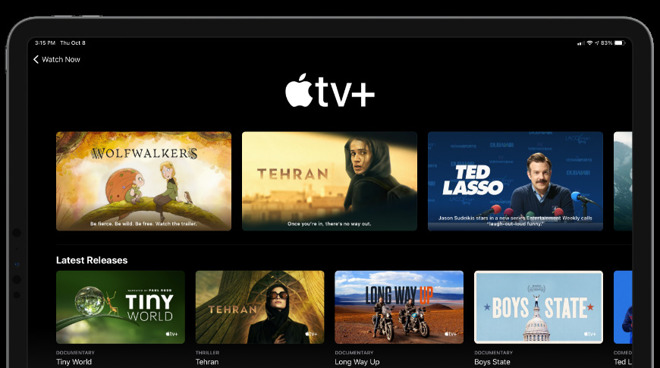 About 81% of respondents to the survey said they subscribe to Netflix, the number one streaming service by far. Amazon Prime Video ranked second with 65%, while Hulu came in third with 56%, according to the survey seen by Variety.

Disney+ and HBO Max rounded out the rest of the top five streaming services with 47% and 22%, respectively. Even NBC streamer Peacock came in higher than Apple, with 18% of those surveyed saying they subscribe to the service.

Streaming has surged against the backdrop of the global coronavirus pandemic. The J.D. Power survey also indicates that 49% of respondents subscribe to four or more streaming services, up from three at the start of the health crisis.

The overall ranking of streaming services in the J.D. Power survey lines up with other recent research, including a report from JustWatch.

However, JustWatch's report doesn't line up in percentages. According to the "measured interest" metric, Netflix came in with 31%. Apple TV+, at the low end of the spectrum, had 3% of the measured interest.

Although surveys and data like these can paint a broad picture of the streaming industry, differences in calculations and methodology can make it hard to pinpoint what's actually going on.

Earlier on Friday, a MoffetNathan survey indicated that 62% of Apple TV+ subscribers were on a free trial and that less than a third would renew their service.
«123»