AppleInsider
Posted: February 16, 2021 4:02PM
in macOS edited February 2021
LastPass is introducing limits to how it operates its service in March, restricting free-tier users to either computers, or iPhones and other mobile devices. 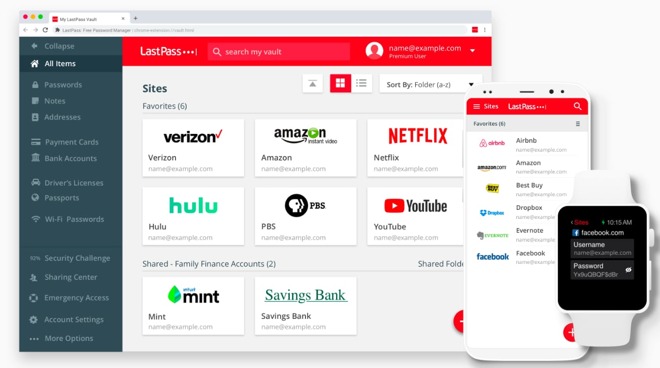 One of several prominent cross-platform password managers, LastPass offers users both a free service and premium options. With inbound changes starting from March, more of those free users maybe nudged towards paying the company.

Currently, passwords stored in the vault can be used across all of a user's devices, including web browsers on Macs and iPhones, to log in to apps, and on other platforms. From March 16, the company writes free users will be limited to using the service either on computers or on mobile devices.

Those opting for use on computers will continue using the service on any Mac or PC as usual. However, they won't be able to access their accounts on mobile devices like an iPhone or iPad without upgrading their service.

Likewise, a user selecting to use it with mobile devices will be limited to using LastPass Free on smartphones, tablets, and smartwatches. Access on desktops and notebooks would be prevented unless they upgraded.

The choice of which device type the users can use will be determined by their first login on or after March 16, with the choice made automatically based on what was used for that authentication. Users will then have three opportunities to switch device type before it sticks to a specific category.

Even after being limited to one type or another, LastPass states all devices will continue to synchronize automatically. There won't be any loss of data stored in a vault, nor will users be locked out of an account permanently.

This won't be the only change free users will face. On May 17, email support will be cut off for the free service and will be limited only to Premium and Families customers.

Access to the LastPass Support Center will continue for free users after that date.

The change seems to be an attempt to nudge its contingent of free users into the paid service. At this time, LastPass is offering the upgrade at a discount to $2.25 per month, billed annually at $27, instead of the usual $3-per-month cost.

Free users still have the option of shopping around for a different service, with other options including 1Password, Enpass, and Bitwarden. Mac and iPhone users will also be familiar with Apple's Keychain system, which offers many of the same capabilities.

Apple is also working to bring out iCloud Passwords for Windows, enabling the Keychain-stored passwords to be used in Google Chrome. However, access to the service was pulled shortly after launch due to some teething issues.