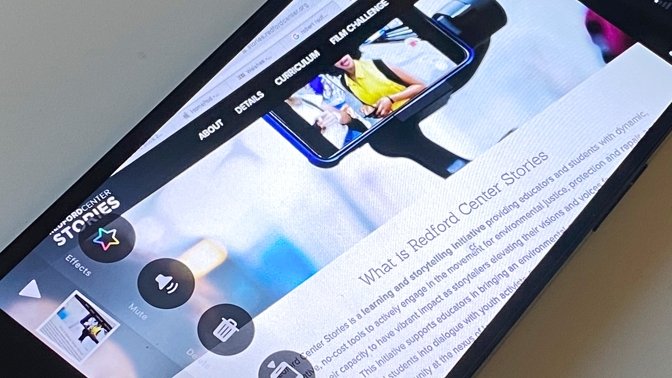 Apple and the Redford Center have teamed up to launch the education organization's second annual filmmaking challenge. It's a youth film project using the Apple Clips app, and aimed at raising awareness of environmental issues. The judges include Apple's vice president of environment, policy and social initiatives, Lisa Jackson.

"It's time to hand the reins to our youth and encourage them to become the designers of their future," said actor and Redford Center co-founder Robert Redford. "Young people have the optimism, energy, and fresh perspective we need to meet our environmental challenges head-on. We must honor their efforts and support them as leaders."

According to Variety, Apple's involvement is one part of the company's Racial Equality and Justice Initiative.

"Young people are leading the movement to create urgency around the need for environmental action," Lisa Jackson said in a statement seen by Variety. "We are thrilled to partner with the Redford Center to lift young people's voices and give them tools to create content that inspires real change and furthers justice around the world. For there is no justice without environmental justice."

The 2021 Redford Center Stories Challenge sees young filmmakers responding to one of three prompts. In each case the challenge is looking for 90-second films made with Apple Clips app, and by filmmakers aged 10-14.

Each film can be made by one or more students, up to a group of 24. The entries must be made "in conjunction with a teacher or adult sponsor."

Winning films in each of the three categories will be chosen by a panel of ten judges. In total, the contest is offering in excess of $10,000 "in incentives and prizes," which will include Apple gift cards.

Of the three prompts, two are quite specific. "I Live Here" is about filmmakers can "tell the story of your environment." Then "I'm Not Who You Think I Am... I'm an Environmentalist" is meant to prompt films showing how people are "investing in environmental justice, protection, and/or regeneration."

A third option is called "Open," and puts no constraints on how filmmakers portray "what environmental justice looks like or sounds like."