AppleInsider
Posted: April 17, 2021 7:41PM
in Future Apple Hardware
Photographs of what could be a screen protector for the "iPhone 13" once again give an idea of what to expect from the rumored shrunken notch of the 2021 iPhone range. 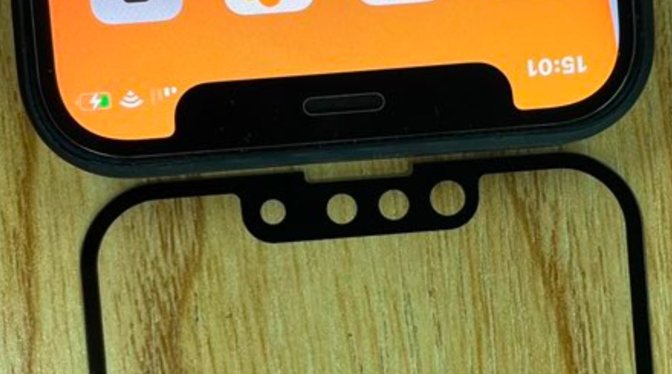 A number of images have surfaced since the start of 2021, supposedly showing evidence that the upcoming "iPhone 13" will offer users a smaller notch than in previous models. With a rearrangement of the items at the top of the iPhone, Apple will supposedly find the means to shrink down the notch and give users more screen space.

In new images posted to Twitter by Duan Rui, originally sourced from Weibo, a glass panel with a black border is shown to have the usual notch at the top of the screen. As seen in other image-based leaks, the glass panel relocates the gap for the speaker to the edge of the glass panel, enabling the TrueDepth camera array to bunch up and take up less room.

When put against a current-generation iPhone, the notch is still evident, but smaller in the glass panel.

While the Twitter account has previously shared images and other items in the tech rumor field, there's no guarantee that the items being shown are actually the front glass panels of the "iPhone 13," especially when there's no text to accompany the images.

It's entirely plausible the panels shown could be prototype screen protectors created by an accessory vendor in preparation for Apple's fall product launches. In such a case, it is likely the producer used a combination of rumored information, other leaks, and measurements of the iPhone 12 handsets to create the test version.

It certainly seems to use the same physical dimensions of previous prototypes and renders, and even looks similar to glass panels that surfaced in March.

There's no guarantee that the images depict actual Apple products or related accessories. It won't be until closer to the time that more plausible leaks will roll in, though even at that stage there won't be any real confirmation of features and specifications until Apple actually launches its next iPhone generation.