AppleInsider
Posted: April 19, 2021 12:21PM
in iPhone
Buyers of iPhones tend to purchase models with higher storage capacities than their Android counterparts, according to analysis of fourth-quarter sales, a gap that could widen with the introduction of a 1-terabyte model in the "iPhone 13." 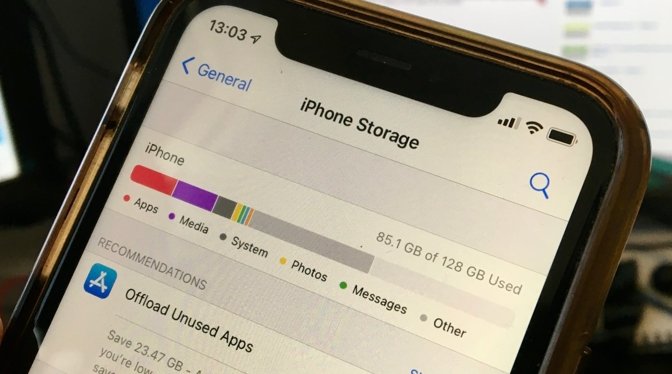 Smartphone users typically desire to have as much storage as possible on their devices, in order to hold as much of their digital lives as possible. It is thought to be an important criterion for new smartphone buyers alongside screen size, cameras, and connectivity, and demand has gradually increased over time.

According to a Counterpoint Research report published on Monday, the smartphone industry as a whole is experiencing a trend for adopting larger NAND memory capacities on devices. After seeing the average NAND capacity pass 100 gigabytes in 2020, it is reckoned the industry benefited heavily from price reductions in UFS NAND memory.

Apple is said to have retained a higher NAND flash density on their devices than Android counterparts, with users opting for larger storage capacities in iPhones over time. However the firm believes the high average relative to Android is reducing due to a combination of Apple limiting the iPhone 12 to 512 gigabytes at most, and because Android vendors are adding more storage to their devices .

In the fourth quarter of 2020, iPhones were said to be supplied with an average storage capacity of 141 gigabytes, putting it in second place behind Huawei's 150 gigabytes. Apple still has a hefty lead over Oppo, Honor, and Vivo with 122, 115, and 108 gigabytes respectively, while Samsung is in sixth place with 95 gigabytes. 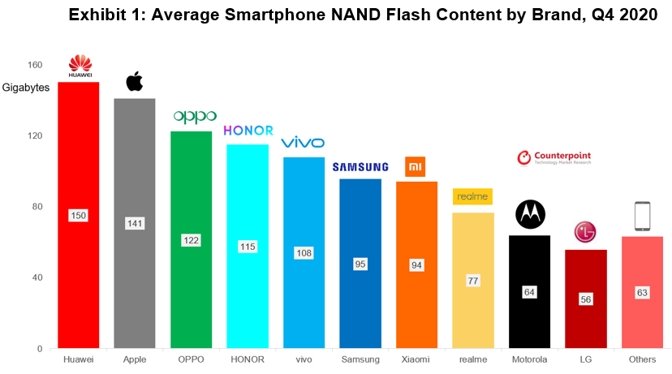 Between 2019 and 2020, Apple's 128GB models experienced a yearly growth in shipments in the "low-to-mid teens." Meanwhile 64GB models saw a 1% decline over the same period.

Counterpoint believes 128GB is fast becoming the minimum standard for storage capacities in the mid-to-high end of the market.

While Apple currently offers a maximum of 256GB of storage in its iPhone 12 and 512GB in the iPhone 12 Pro, there is always the possibility of Apple increasing capacities. Apple typically doubles its top-end storage allocation every two years, though it has stayed at 512GB for three, making a 2021 upgrade more plausible.

Early iPhone 13 rumors also pointed to the prospect of a 1TB iPhone.