If you plan on using your new M1 iMac with a VESA mount, make sure to buy the right model

AppleInsider
Posted: April 20, 2021 7:13PM
in Current Mac Hardware
Apple is selling its new iMac in both a standalone version and a VESA-compatible variant, meaning users who want to use their own mounts should ensure they select the right model. 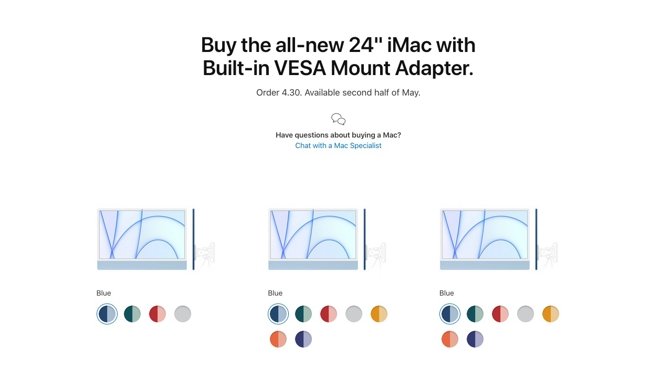 The Cupertino tech giant on Tuesday announced a brand-new 24-inch iMac refresh equipped with an M1 chip, significantly updated audio and video capabilities, and a host of other features.

As with previous iMac models, the standard version of the iMac comes with a built-in stand for users wanting a simple desk setup. However, users who want to use their own mounting system should take care not to purchase the model with a stand.

Instead, Apple has a 24-inch iMac with a built-in VESA mount adapter. With a standard four-screw mount on the rear, users can install the VESA variant on a variety of arms or brackets.

Additionally, users should note that the entry-level 24-inch iMac only comes in Blue, Green, Pink, and Silver. The higher-priced tiers are available in the other colors, Yellow, Orange, and Purple.

Other model differences include the lack of two additional USB-C ports on the cheapest iMac. That model is only equipped with two Thunderbolt 3 ports, whereas the more expensive variants have an additional pair of USB-C ports.